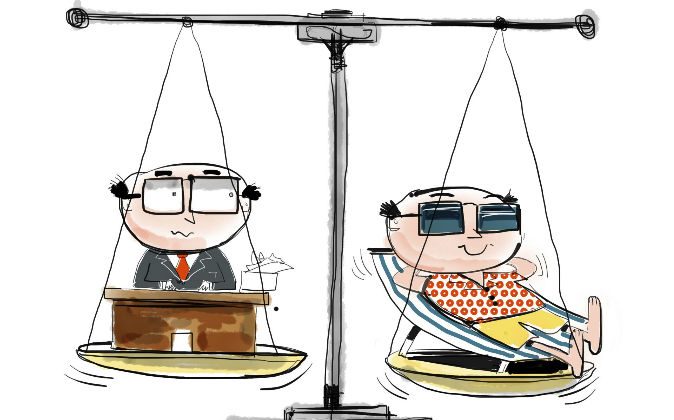 Is It Even Possible to Have a Work-Life Balance?

Back in the early 1980s, when I started researching the field of careers, the notion of “work-life balance” was decidedly embryonic. It certainly had almost no resonance among women, who were still expected to work both at work and at home. Now it’s an acknowledged part of the zeitgeist and central to how we arrange our lives.

Look at investment bank JP Morgan Chase’s recent announcement of its Pencils Down initiative, which encourages its young bankers to take off every weekend unless they’re involved in a “live deal.” Speaking to the Wall Street Journal, Carlos Hernandez, the company’s head of global banking, described the scheme as “realistic to what this generation wants.”

Stories highlighting the intensity of corporate life are familiar, and it’s a relief that some organizations are starting to take heed. It was the death of Moritz Erhardt, an intern at Bank of America Merrill Lynch, that first drove the banking industry as a whole to confront its workaholic zeal. Although exhaustion from work could not definitely be linked to his death, the fact that it followed a 72-hour shift led to calls to reassess the demands of banking culture.

Yet there’s reason to believe such innovations, however well-intentioned, are innately doomed. The problem is that the very idea of work-life balance suggests a neatly divisible whole that we can split as we wish. The truth is that life simply isn’t like that.

Why? Because stuff happens. There may well be people whose existence remains miraculously untroubled by random and unforeseen events, but for everyone else the supposedly competing spheres of work and life intrude on each other almost all the time.

It’s not even a question of balance. It’s a question of control. There are times when work and life can be shaped to our desires—we keep them apart to provide clarity and focus or pull them together when we crave clutter and noise—but often, despite our busy schedules and careful planning, one smashes into the other, leaving us painfully conscious that our efforts are collapsing all around us.

By way of illustration, consider the following basic framework for understanding the ever-shifting relationship between work and life. Expressed in more detail in research I co-authored with Jo Duberley and Gill Musson, it charts the slide from a high level of control to little or none.

This is the ideal we hear so much about. It’s where we keep work and life separate and why we head for the office when we could work from home, why we put on our smart clothes, why we talk about the nine-to-five. Many of us strive for it—and sometimes we even manage to pull it off.

We sometimes try to amalgamate our “work” and “life” identities into a seamless whole. We have flexible boundaries—say, by working at home during school holidays. There can be an element of disruption, but it’s because we like it that way, and we still retain control.

When it suits us, we’re happy to import things from one sphere to another. It could be something as straightforward as talking about work at home or home at work. Crucially, in such instances we decide how much to give and when.

This is where we start to lose control. We can’t stop the two worlds from entering each other’s orbit. Worrying about work deadlines at the dinner table, wondering about the kids’ forgotten football kit during a conference—the effect can be positive or negative.

Here the sense of disorder and the consequent loss of control become significant. The impingement of one sphere on the other might be physical or emotional. A loved one being rushed into hospital is an obvious example.

Now imagine a loved one is diagnosed with a serious condition. Suddenly the emotions associated with one domain completely overpower the other. All control is gone. Disorder dominates. There’s little hope of balance now.

We probably all recognize the above scenarios more readily than we might identify with the romanticized epitome of work-life balance. Countless books, guides, programs, coaches and campaigns give us the distinct impression that there’s precious little difference between carving up our lives and cutting a cake, but the comparison is ridiculous.

Does Work Leave You Tired, Stressed With No Time for Family? You’re Not Alone

Both “work” and “life” are elastic concepts. They’re in a state of ceaseless tension, and we’re almost perpetually reinforcing or redefining their boundaries in response not only to our own needs and desires but also the constraints imposed on us.

It’s an unending process—one we have to manage every day. The belief that it will result in flawless balance is sadly and even perilously misplaced. Perfection is unattainable, because ebbs and flows are far likelier than glorious equilibrium. That’s just the way it is, and we would do well to accept as much—as would employers that peddle the dangerous fiction of once-and-for-all solutions.

Laurie Cohen is a professor of work and organization at the University of Nottingham in the U.K. This article was originally published on The Conversation.