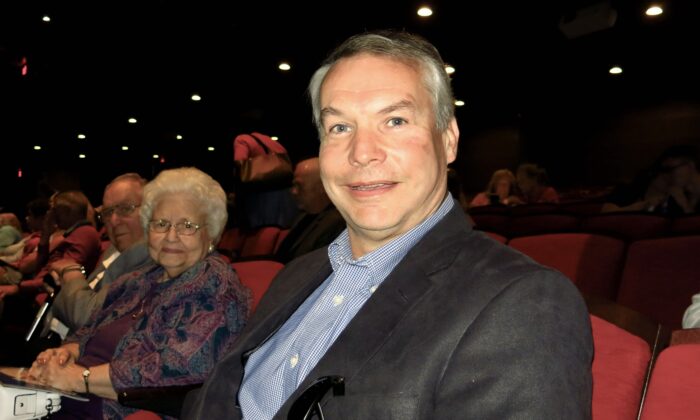 INDIANAPOLIS, Ind.—In its mission to revive China’s true authentic culture from the pre-communist era, Shen Yun Performing Arts, the world’s leading classical Chinese dance and music company, is receiving applause from around the world for its beauty, artistry, and profound messaging.

At a performance at the Butler Art Center in Clowes Memorial Hall, Adrian Obando, the owner of property management company Sanctuary Builders, and his wife Ashley Obando related to the universal stories of beauty and courage presented in the performance.

Mrs. Obando, a service request manager for Ashville Healthcare, was amazed by the movements of Shen Yun‘s dancers and noted how impressed she had been by the dance called “Plum Blossoms in Spring,” which in Chinese culture symbolises courage and resilience as the flowers bloom in the depths of winter.

“Very, very beautiful and all the dancers are talented, but then also all the acrobatics they put into it,” she said in awe. She also enjoyed learning about Chinese history and culture.

Mrs. Obando enjoyed the piece, “Insanity During the End of Days,” which depicts today’s persecution of the spiritual practice, Falun Gong, whose followers uphold the values of truthfulness, compassion and tolerance.

Mrs. Obando said that Americans enjoy [religious] freedom, so it is shocking to learn how people with spiritual beliefs are being persecuted in China. “It hit me hard too because I didn’t realise [it was happening]. As a parent, you want to protect your kids, but also pass your culture on to them.”

“Insanity During the End of Days” relates the horror of a father who unknowingly participates in the murder of his daughter, a Falun Gong practitioner, who falls victim to the Chinese Communist Party’s forced organ transplant industry that targets religious believers for monetary gain.

She was astounded to learn that Shen Yun had been banned from performing in China. “[Then] how are we teaching and raising children in China to learn about the culture, how is it being passed on? Just through folklore?” she wondered.

At the same time, Mrs. Obando felt that the United States and other countries are going in a similar direction, losing the culture imbued in traditional music, art, and dance.

“But I didn’t realise that the persecution was an aspect [of that] and that really hit me as a parent, emotionally,” she said.

Mr. Obando echoed his wife’s sentiments and was deeply touched by the dance. “That performance to me was very interesting because it … incorporated every emotion that [Falun Gong] have gone through and you followed it step by step,” he said.

“We come from a socialist country,” Mr. Obando said of Nicaragua. “So my family … still has to deal with persecution, or actually, not even having the freedom to think outside of their own scale,” he said. It is a shame that the Chinese people cannot watch Shen Yun and lose an opportunity to see the richness of their own culture, he added.

“Chinese history needs to be celebrated through the arts and dance that everyone can enjoy,” Mrs. Obando said.

The Same is Happening in America

Mr. Hartman, who was also attending the matinee performance with his wife, Michelle, remarked that Shen Yun was “very vibrant and bright.”

“The dancing is really incredible,” he said.

Learning about Chinese culture was an educational experience for the Hartmans.

Mr. Hartman commented that the loss of freedom of belief as portrayed in Shen Yun appeared to reflect the state of society in the United States. He was pleased that Shen Yun was depicting the true character of communism in China.

“And I think [this message should be spread] so some people have an understanding of what communism is and you hear it from the perspective of people who have endured it,” he said.

Shen Yun also presents vocalists who share songs with a spiritual message. The lyrics, translated into English, are projected onto the stage backdrop. Mr. Hartman, a Christian, said that the messages of goodness and compassion resonated with him.

“It’s the same premise in my mind, of we’re all human, we’ve all got values, we’re all important. It’s the same concept of respect [for] each other,” he said.