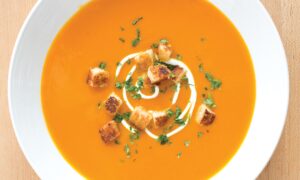 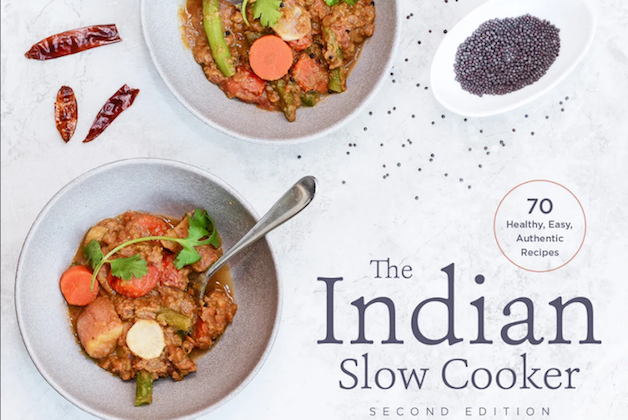 Indian cuisine gets a bad rap. Anupy Singla, business reporter-turned-cookbook author and champion of Indian home cooking, gets that.

“When you think of Indian food, what comes to mind?” she asks in her newly-updated cookbook, “The Indian Slow Cooker.” “Be honest.”

She predicts the answers: an unapproachable motley of foreign spices; hours spent slaving away in the kitchen; dishes dripping with unhealthy oils and creams—and spiked with the kind of spice that “will keep you in the bathroom for hours the next day.”

But such an image is rife with misconceptions, Singla explains.

According to Singla, Indian food can be thought of as having two layers.

One is restaurant-style, encompassing those familiar rich, cream-laden curries and sauces, in dishes like butter chicken and chicken tikka masala (more British than Indian, in fact), often heavy with “layers upon layers of oil, heat, and creams.” It’s by no means everyday fare; nor is it representative of the whole of the colorful and highly regional tapestry that is Indian cuisine (most restaurants serve Punjabi, or North Indian dishes).

It’s also far from what Singla grew up eating, and what she makes for her family now. That brings her to the second layer: homestyle cooking.

Also unlike much of restaurant fare, they’re incredibly healthy. Strip away the excess oil and cream, and the foundation of Indian cuisine is both cheap and nutritious: lentils, beans, peas, and fresh veggies abound. Naan, perhaps India’s best-known, but calorie-bomb bread, is mostly reserved for special occasions; the humble whole-wheat roti, low-calorie and fat-free, takes its place on the everyday dinner table.

This is what Singla wants to share: what “we eat normally, day-to-day, and make super fast and super easily in our own homes, for our children,” she says. She does so with her cookbooks, full of traditional family recipes and dishes of her own creation, and the classes she teaches at major stores and libraries.

“[It’s] really about sharing what I already knew,” she says. “I call it the secret of Indian food. You’re very lucky [if] you’re asked to someone’s house for a home-cooked meal—that’s where all the magic is.”

Connected by a Slow Cooker

Singla grew up outside of Philadelphia, but spent many of her summers in India. In her grandmother’s village, she watched the cooks “mash spices by hand and toil over hot clay stoves for hours at a time,” she writes.

Her grandfather was “the foodie in our family,” she says. He would travel hundreds of miles into the mountains on Hindu retreats, and bring back new recipes to his small village of Bhikhi, Punjab to be added to his family’s exclusive culinary repertoire. He taught Singla how to cook at 10 years old—how to appreciate the profiles of traditional spices; how to cut the eggplant just so for aloo baingan, curried eggplant and potatoes, the first recipe she ever learned; and how to always add in their semi-woody ends, too, because the sweet meat tucked inside would turn into “the juiciest, tastiest part of the dish.”

At home in Pennsylvania, Singla grew up eating Indian food. Traditionally, Indian cooks have relied on pressure cookers and clay pots, but given the danger element of the first and the hours-long babysitting time required for the latter, Singla’s mother turned to an alternative. Enter the slow cooker.

After discovering the contraption by way of a coworker in the 70s, she was hooked. It saved her hours of time, priceless to a working mom—without sacrificing flavor.

“[My brother and I] grew up with my mom handwriting slow cooker recipes she developed over 20 years,” Singla says. When Singla started her freshman year of college, her mother sent her off with her own device.

Now, slow cooking is at the center of Singla’s own kitchen, the easiest, set-it-and-forget-it method for simple dals and soups; spice-laden veggies and stewed meats; or her most requested recipe, rajmah, curried kidney beans she calls “the Punjabi equivalent of red beans with rice.” Spices deeply infuse into the dishes over time (even without doing a traditional tarka, the practice of infusing hot oil or ghee with spices to finish a dish), while lentils and beans break down to creamy perfection, without extra cream or oil.

Anticipating the challenge of a certain trending alternative, she’s also quick to mention: slow cooking “gives you a level of taste”—a depth of flavor—“that [electric] pressure cookers just do not.”

For Singla, as for her mother, it’s a way to continue to make the traditional dishes of her home and heritage, despite the limitations of a busy, modern lifestyle. Crucially, it ensures that these dishes are passed down to her children, too.

That’s one of the easiest ways to help them get to know their culture, she says: by “understanding and loving your own cuisine. That’s been my mission from day one.”