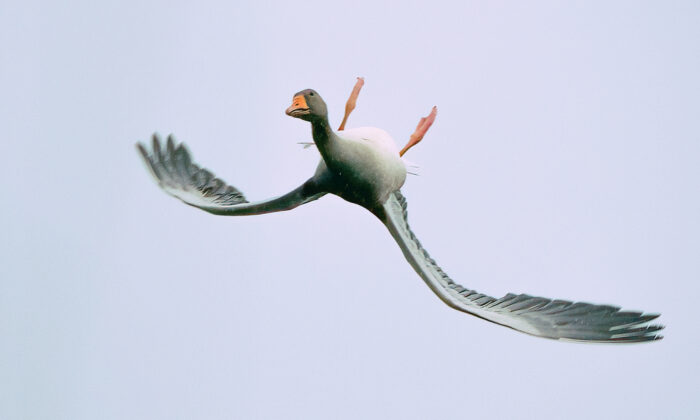 It was a cold and rainy day in March when Dutch photographer Vincent Cornelissen grabbed his camera, and set out to snap some bird photos. It was the perfect weather to catch his avian subject matter off-guard for something a little different.

He found what he was looking for—and then some.

The 49-year-old from Huissen, a small town near Arnhem, has been taking pictures his whole life. One day, he’d realized how nice it was taking shots of birds while he was out hiking—another pastime of his—and he eventually bought a professional camera.

On this particular rainy day, though, Cornelissen planned to check off one item on his photography wish list, as he explained.

“My goal was to photograph birds struggling with the wind and hail,” he told The Epoch Times. “So, I was a lucky man when I got home that day.”

As Cornelissen was out shooting, he spotted a bean goose in the air, fighting the strong wind. The goose suddenly performed a remarkable acrobatic maneuver, and Cornelissen managed to catch it on camera.

“I saw the goose struggling in the wind. It flipped and I took some shots of it,” Cornelissen said. “Later I saw its remarkable position.”

The photographer, with the help of the goose, had labored to produce a photo of an inverted bird in flight!

He later learned that the goose might have done this intentionally.

“At first, I thought it flipped because of the strong wind,” Cornelissen said. “I was later told that it’s called whiffling and that geese do this to brake and descend.”

But some had another interpretation, he found out. “I heard is that a goose does this just to impress their fellow geese,” he added. “I like both explanations.”

Although Cornelissen doesn’t consider himself a professional photographer, he does have his own website, as well as his Instagram and Facebook pages—where he posted the bizarre picture of the upside-down goose. Unexpectedly, the photo garnered huge attention—not only on social media, but even on the news.

Although most people’s response to the photo were positive, not everyone’s was. “Others keep saying it’s probably Photoshop,” he confided. “First I defended myself but I stopped doing that.”

“One of the nicest reactions” he received was from a little girl who sent him a drawing of the topsy-turvy bean goose, he explained.

Although the photographer admits his shot was “not a high quality picture,” for he had no tripod due to the wind, the end result was “unique.” He added that he was “very proud of it” and “humbled” that so many thousands took notice of the odd picture he captured that day.