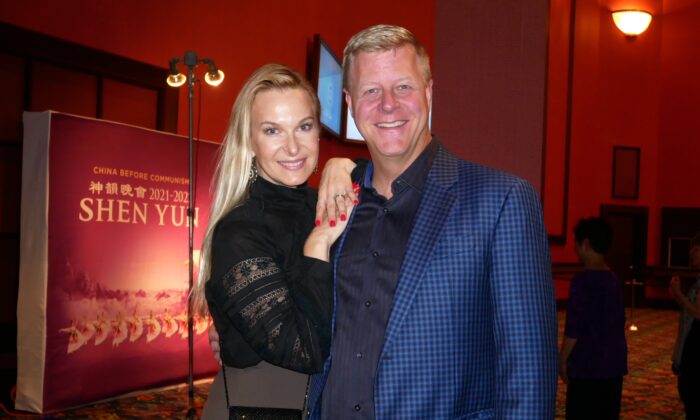 ROSEMONT, Ill.—Joel Carlsen, vice president for a large financial company, and hair salon owner Lina Carlsen were amazed by Shen Yun at the Rosemont Theatre in Rosemont, Illinois on April 30.

“I loved it. Everything about it from costumes to the music and the performance and colors and history,” said Mrs. Carlsen.

“I didn’t know what to expect coming in … it was an experience that I wasn’t prepared for in a good way,” he said, “it was extremely unique, creative, clever, wonderful, passionate … a spectacular performance.”

Mr. and Mrs. Carlsen were wowed by the company’s patented method of integrating a 3D animated backdrop with the stage performance. It allows the performers to travel back and forth between the stage and the background projection.

“The backdrop it was incredible … very clever. I’ve never seen anything like that before actually. It was perfect timing and every time it happened you just said ‘wow,’” she said.

Along with myths and legends from ancient times, Shen Yun presents story-based dances depicting the persecution of Falun Dafa, a meditation and spiritual discipline based on the principles of truthfulness, compassion, and tolerance.

“It brought me to tears actually,” said Mrs. Carlsen.

“I grew up in Lithuania, and it was under Russian control. I know what communism is and how terrifying and scary it is,” she said, “People are still suffering from that.”

Mr. Carlsen said he gained a new appreciation for the world before communism and for the realistic view that Shen Yun provided.

“It really opened my eyes to the beauty in the world and the impact of a communist regime and the beauty it can suppress and take away … or hide,” he said.

China was once known as “The Land of the Divine” and Shen Yun presents this culture by drawing upon the Middle Kingdom’s Buddhist and Daoist philosophies.

In the past, artists looked to the divine for inspiration and cultivated virtue in order to create uplifting art. Today, Shen Yun’s artists follow in this noble tradition, which is why audiences feel there is something different about Shen Yun, says the company’s website.

“[Shen Yun’s] goals and mission is bigger than just a performance. It’s really to bring to light the divine joy in beings that we all are. So, I enjoyed it, I really enjoyed it!” said Mr. Carlsen.

Reflecting on the values and the inspirational messages throughout the performance, Mrs. Carlsen said: “What I saw was just pure art … it was pure amazing. I want to go home and be a better person.”