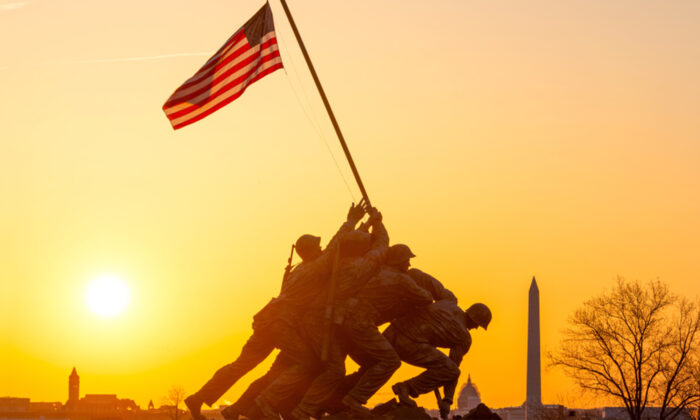 Iconic Photo of Marines’ Flag-Raising During Battle of Iwo Jima Was Taken 75 Years Ago, Still Inspires

A famous black-and-white photograph depicts five American Marines and a Navy medic raising a United States flag at the top of Mount Suribachi on the island of Iwo Jima. The picture was taken on Feb. 23, 1945—75 years ago to the day—nearing the end of a ferocious battle between the Americans and the Japanese. Since then, the photo has become a military icon.

“To get that flag up there, America’s fighting men had to die on that island and other islands and off the shore and in the air,” said Joe Rosenthal, who took the photo, in an interview marking the 10th anniversary of the battle of Iwo Jima. “I took [the picture], but the Marines took Iwo Jima.”

Just two days after the photo was taken, Rosenthal’s picture appeared in Sunday newspapers across America and gained almost instant acclaim. The story of the photo and the taking of Iwo Jima represent the courage under fire displayed by the Marines in one of the most hard-fought battles in the Pacific.

The taking of Mount Suribachi represented a breakthrough for American troops. Yet the battle for Iwo Jima and Japan was far from over. Of the six soldiers that Rosenthal captured in the process of raising the flag, three would be killed in action before the island was finally taken.

“[T]o me it is a representation of man’s struggle, of the living taking over for the fallen dead because the battle must go on,” Rosenthal said.

The fact that such a timeless image could come from an insignificant island in the vast Pacific Ocean is incredible. Iwo Jima was part of the Allied strategy called “island hopping” executed against the Japanese in preparation for the invasion of Okinawa and the main islands.

The 74,000 Marines and Seabees that landed there on Feb. 19, 1945, faced an entrenched enemy, in pillboxes and bunkers, that knew retreat was not an option.

The battle for Iwo Jima saw the highest number of Marine casualties during the war, with some 7,000 killed and 20,000 wounded, according to the National World War II Museum. It would be little exaggeration to say each inch of beach and hillside was won with blood.

“No man who survived that beach can tell you how he did it,” Rosenthal said. “It was like walking through rain and not getting wet.” It took the Marines days of painstaking advances up the pillbox-littered hillsides to approach Mount Suribachi, which had been used by the enemy as an advance reconnaissance point to spot American bombers heading for Japan and to coordinate artillery fire.

When the first Americans finally made it to the summit, taking gunfire and artillery all the way, they raised a small flag to commemorate the occasion. Rosenthal hadn’t even made it up to the top himself, and the first photographs were taken by U.S. Marine Corps Staff Sergeant Louis R. Lowery. On his way down, he encountered Rosenthal and Sergeant Bill Genaust, who had a video camera, and told them that they had missed the action but to continue up to the incredible vantage point to see for themselves.

As it turned out, they arrived just as a much larger flag was being hoisted up, and that was the moment that Rosenthal photographed and Genaust videoed. Seeing the smaller flag being replaced, they had to decide what to shoot and decided to focus on the big flag being put up. “When you take a picture like that, you don’t come away saying you got a great shot,” Rosenthal admitted in 1955.

Hal Buell, former AP executive and friend of Rosenthal’s, told CNN, “You couldn’t have captured the action at a better peak. A moment earlier, and the flag would have been too low. If it had been a second later, the flag’s staff would have been straight up, and the photo wouldn’t have had that strong diagonal line.”

All Rosenthal could do was bear witness to this embodiment of the bravery in the face of terrible odds that the Marines had exhibited. “To me it is not alone a snapshot of five Marines and a naval medical corpsman raising the flag,” he said 10 years later. “It is the kids who took that island and got that flag there.”

Bill Genaust, who accompanied Rosenthal to the top of the mountain and shot the video, was later killed in action before the island was taken; meanwhile, Rosenthal would go on to survive and win the 1945 Pulitzer Prize for photography. His picture would be the basis for a statue for the 1954 U.S. Marine Corps War Memorial in Washington, D.C.

One of the greatest photographs of the 20th century still reminds of the bravery and sacrifice of the fighting men and women of the United States Marines in a new century and shall continue to do so for generations to come.