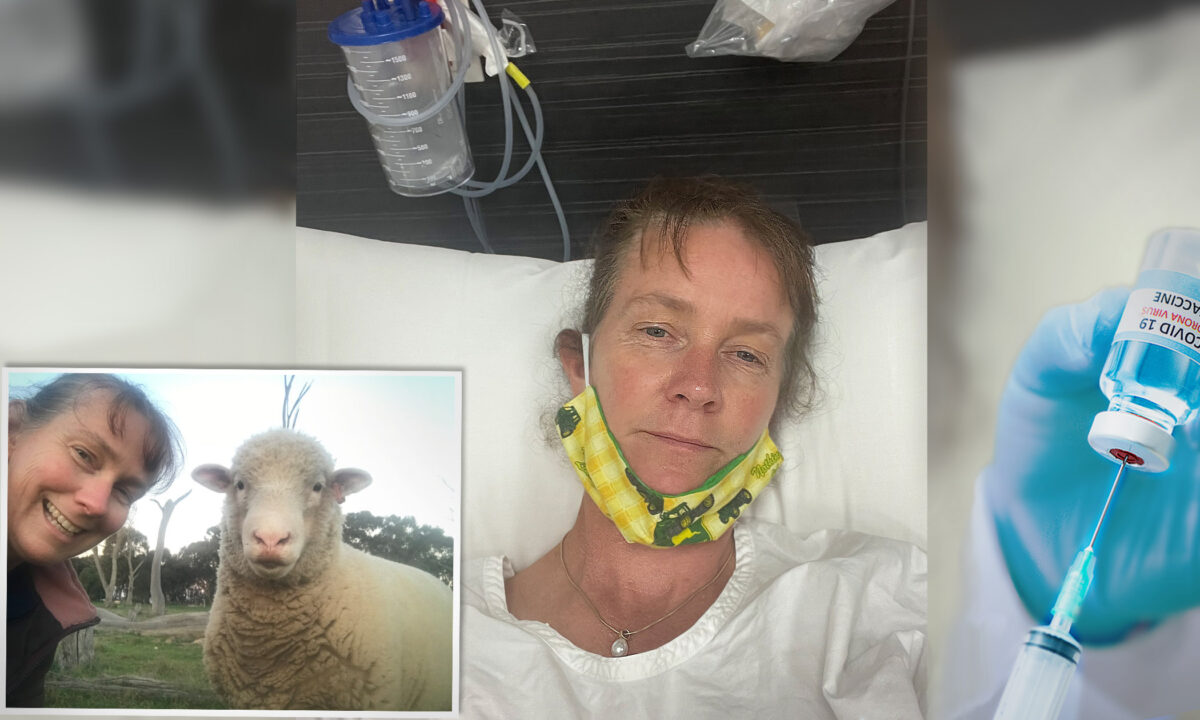 Vaxxed Aussie Woman Suffers ‘Stroke-Like’ Symptoms, Loses Job for Refusing 2nd Jab: ‘I Was About to Black Out’

Australians are still suffering from the trauma of government health mandates.

In the wake of Australia’s “zero COVID” policy, which boasts 95 percent of all citizens over 16 vaccinated and some of the world’s strictest lockdowns, Scott Morrison’s government was swept out of power in May. Yet broken businesses and people’s wrecked health struggle to recover.

Some fear they may never recover.

Ask Liz Mann, who was vaccinated and says she hasn’t been the same since. Mann, 50, who works in agriculture and runs a farm in northern Victoria, wasn’t an anti-vaxxer — she had her yellow fever, Hep-A, and other shots — but decided to pass on the corona vaccine. She had COVID already, she reckons, having suffered prolonged flu-like symptoms in January 2020. So she’d have immunity. With her health history of chronic fatigue, a UK study found, she had a 27 percent chance of a “severe reaction” to Pfizer’s vaccine. On those accounts, she ought to’ve been exempt.

None of that mattered.

Per Victoria’s mandate, to work, she’d have to roll up her sleeve. Delaying the inevitable, she tried working remotely from home for two weeks and took another two weeks off, but the mandates loomed. So, she caved, visited the drive-through clinic in Murchison, got the jab, and was told to park and wait 15 minutes in case of aftereffects before driving home.

Her reaction was instantaneous.

“I wound down the window feeling like I was going to black out, I honked the horn, turned around and looked at the doctor out my rear vision mirror,” she told The Epoch Times. “And then I just dropped the seat because I was about to black out.” Medical staff at the clinic checked her blood pressure and it was “160 over 100,” she said, adding that she’s “normally low blood pressure.” “I had trouble standing up at that point,” she recalled, and told how chest pains followed. “Within about three hours, it felt like I’d been kicked in the chest by a horse.”

Doctors at the clinic watched on, arms crossed over their chests, and made remarks as she lay outside. “‘Well, wonder what will happen when she has her second vaccine,’ and I said, ‘I’m not having it,’” Liz recalled. “And they had a bit of a laugh and said, ‘We’ll see about that.’ I was pretty disgusted actually.”

We contacted Murchison Medical Clinic for comment, but they were unable to respond before publishing.

Mann’s condition showed little improvement in the days and weeks following. She remained lethargic, was bedridden for weeks on end, and was unable to perform daily tasks maintaining the farm. When a tree fell onto a fence and she had to use a chainsaw, the physical strain spurred chest pains, which extended to her face, and she had to call an ambulance. Within two weeks of the jab, other symptoms, including rashes, spontaneous bruising, and a black eye, appeared. On day 41, one side of her face drooped, and she experienced “stroke-like symptoms.”

Despite all this, Mann couldn’t get a medical exemption for her impending second jab — unlike what one would expect with side effects from other drugs like penicillin. Meanwhile, her job demanded it. She refused. They terminated her contract, but the letter they sent made no mention of vaccine stipulations.

The point was moot anyway; she couldn’t work. Her health bottomed out.

Mann did eventually get a medical exemption after eight weeks, but couldn’t work at the level she once did. Any physical activity, such as tending to her livestock, brought on pain in her chest and face, with some days being lost entirely to poor health.

Adding insult to injury, when Mann was granted a public records request, she saw her doctor had written that she had “psychological issues,” placing the blame on “anxiety.” She also found a discrepancy: Her doctors had put in a claim for two doses (was it a double?) while her immunization history showed none.

Yet Mann is lucky in some respects. With her situation, having multiple jobs and the ability to work remotely or outside Victoria, where restrictions are less strict, she can earn a living. Not everyone’s so lucky.

Nevertheless, if the election proves anything, it’s that while Australians who’ve suffered due to health mandates struggle to reclaim their lost health and livelihoods, their collective faith in the medical industry and government may be beyond repair.

“I don’t trust them anymore. I never want to see another GP in my whole life,” said Mann, adding that, even while awaiting her exemption, all the doctors wanted to do “was to put the next vaccine in [her].” It’s not exactly lucid what lies behind the curtain of absurdities. She posits it’s “very much about control.”

There were medical professionals who were forthcoming in varying degrees. Doctors admitted Mann’s adverse reactions were due to the vaccine, yet referrals to specialists were few and excuses many: “Chest pain is nothing to worry about.” A nurse did look her in the eye and prod her to speak up — even though many in society aren’t open to it.

She did just that.

“I’m not afraid to speak out. I have lost friends over this,” said Mann. “People don’t want to know about this, and it annoys me when you hear from mainstream media about stories of long COVID, but ‘vaccine side effects’ is a dirty [term] that nobody wants to hear.”

In hindsight, faced with that ultimatum again — the jab or no job — would Mann choose differently? “I would have said, ‘I don’t want the job,’ and walked away at that point and had my health,” she said. “I lost the job anyway, so it would have been the same as what happened. But I would have had my health.”