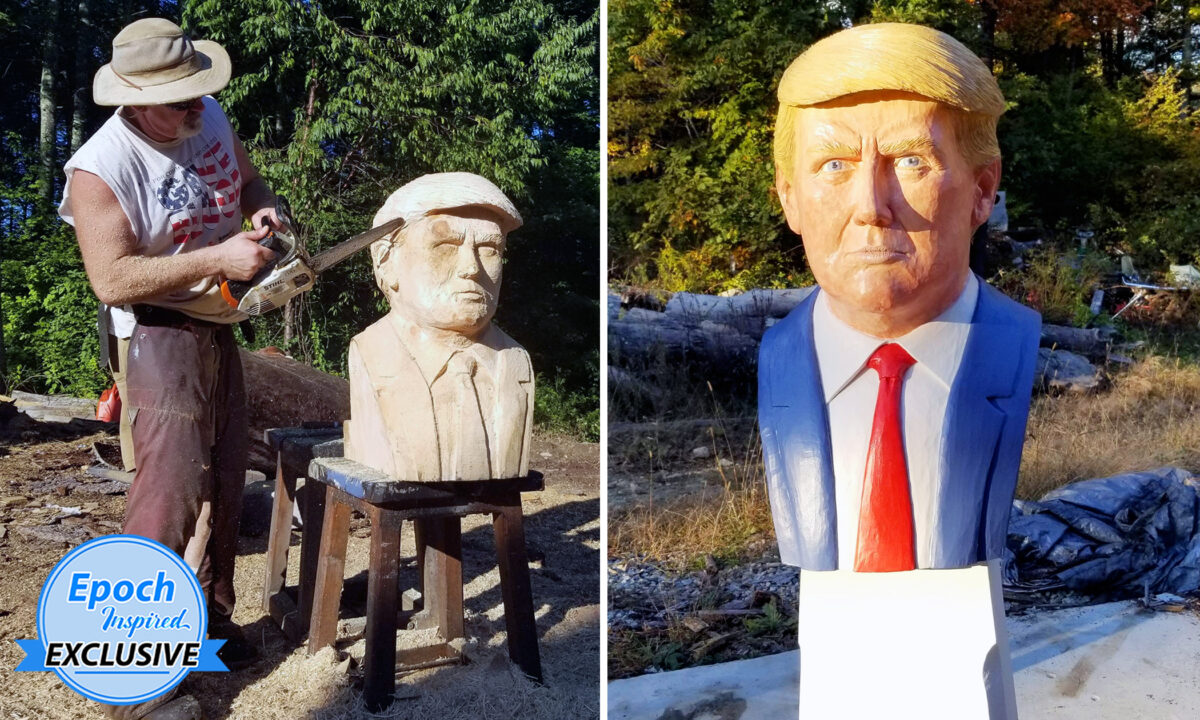 The larger-than-life persona of Donald J. Trump made him the perfect president to drain the swamp and make America great again—according to one New England chainsaw artist, who devotedly sculpts important historical portraits.

Doing one of Trump was just a matter of time.

A bust of the enigmatic 45th President was the perfect project for Christopher LaMontagne, 55, who has been woodworking since he was a kid, whittling in his dad’s workshop in Providence, Rhode Island.

He recently carved a bust of Trump, using his “gasoline chisel” first, to rough-in the businessman’s strong features and distinctive trade mark hairstyle.

“He is a natural born hero—loved by many, myself included, from get go,” LaMontagne told The Epoch Times. “I loved the idea of a successful American businessman draining the D.C. swamp.

“I think he has done a fabulous job even while under constant attack by the deep state. I can only imagine how much more he would do for our great country with these swamp creatures gone.”

The New England chainsaw artist works professionally, sculpting commissioned pieces or “pieces that have broad public interest” which he puts up for sale. The woodworker has depicted past presidents and politicians, such as Washington, Lincoln, and Jefferson Davis; as well as popular figures, such as Elvis and Mr. Rogers.

The eastern white pine sculpture channels 45’s look of shrewd determination. Conceived from a solid hunk of wood in an almost totem-like manner, one gleans a sense of the artist’s heritage—the people of New England stem from Native American ancestry. But the portrait is unmistakably Trump.

The artist recorded an impressive time-lapse video of the sculpting process, which he posted on YouTube. Particularly absorbing is the roughing-in stage, using a large chainsaw to mass large areas—shoulders, nose, jowl, and Trump’s exaggerated, jutting hair. LaMontagne then uses finer tools and chisels for details, such as bushy brows.

Bright color is applied in bold blocks, “hand painted with latex-based paints. They are durable, dry fast, and easy to clean up with water, and have good adhesion,” the artist explained.

Accompanying the bust, LaMontagne even conceived a custom plinth carved the same way as the bust: with a chainsaw.

The finished product is a monumental tribute to the man who started the MAGA movement,

“Here’s a man who loves his country, lived the American dream with great courage, he truly wanted to make America great again, put all his heart and soul into that goal for this great nation that helped make him a great success, so he could return the favor back to America with gratitude,” the artist added. “And I believe history will show he did just that!

“And so of course, I support Trump, what else can I say?”