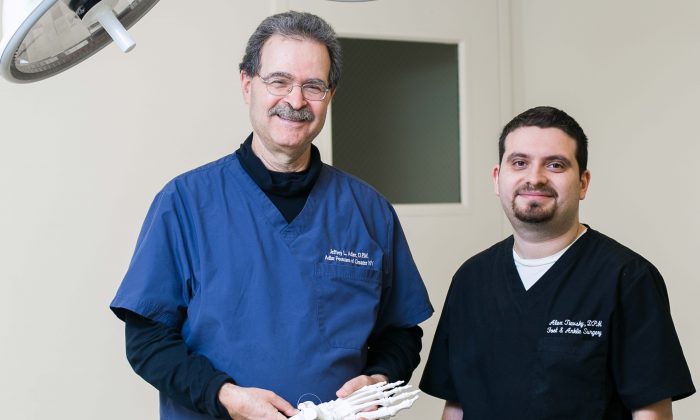 The root cause of a lot of foot problems like bunions, hammertoes, ankle pain, plantar fasciitis, and pinched nerves is due to misalignment of the joint that connects the ankle and the foot. But it’s only been this generation of podiatrists who’ve had treatments that effectively realign this joint.

Podiatrist Dr. Jeffrey Adler, who has been working with the HyProCure treatment for about three years now, said it’s one of the most gratifying treatments he’s come across in his 36 years practicing medicine.

“We used to treat these problems using arches and orthotics … but what we found out is that these undertreat things. Because you have continual motion [in your foot], many people who wear orthotics over a long period of time end up with unnecessary arthritis in their ankle joint and in the subtalar joint,” said Dr. Adler, surgical director of Adler Footcare.

HyProCure is for foot problems what LASIK surgery is for eye problems—a treatment that fixes the root cause.

He said HyProCure is for foot problems what LASIK surgery is for eye problems—a treatment that fixes the root cause.

The procedure involves inserting a small titanium stent into a naturally occurring depression just below the ankle joint, called the sinus tarsi or subtalar joint, to stabilize it. The subtalar joint is located on the outside of the foot just under the bony bump that most of us would call the “ankle bone.” (This bump is actually the end of the fibula. The real ankle bone, the talus, is underneath and below this bump.)

The HyProCure stent stabilizes the subtalar joint but still allows for natural movement, so there is no risk of arthritis like with orthotics, Dr. Adler said.

According to Dr. Alex Tievsky, a surgeon at Adler Footcare, most foot problems are caused by too much movement in the subtalar joint, which causes the talus bone above it to dislocate. Around 30–40 percent of all people roll their ankles in (hyperpronate) when they walk because of this dislocation, and Dr. Tievsky estimates that over 90 percent of their bunion patients have this problem too.

“So the majority of foot problems combined, can be attributed to having this dislocation,” he said.

However, despite the prevalence of this issue, podiatry has historically focused on treating its symptoms, and people are routinely not diagnosed for problems with the subtalar joint, even after years of treatment.

“It’s something that has just recently been looked at more for some reason. It has been known in podiatry that people pronate, that their arches collapse, but for whatever reason, doctors don’t put two-and-two together,” Dr. Tievsky said.

Proper alignment of the body depends on good alignment of the feet. Foot problems can also cause knee, back, sciatic, hip, and even neck pain. So a side benefit of HyProCure for some patients is that other areas heal after their foot problem has been corrected. Sometimes they end up avoiding surgeries like hip or knee replacements.

Dr. Adler said that unless people have a back, knee, or hip problem that requires immediate attention, they should deal with foot issues first.

“If you take away the foot issues, then whatever pain or dysfunction is left over, you can rest assured, is strictly in your hip or your back or your neck.”

Dr. Adler lectured for years alongside the podiatrist who created HyProCure, Dr. Michael Graham, but thought the treatment sounded too good to be true.

He changed his mind when an associate of his looked into HyProCure and competing products hoping to help her sister. After the sister went from very labored, painful walking to having perfectly normal movement and canceled her hip-replacement surgery, Dr. Adler was convinced and began to study the procedure intensively.

He and Dr. Tievsky are now master HyProCure surgeons. They offer trainings to podiatrists from around the world, and Adler Footcare clinics are Centers of Excellence for HyProCure Implantations (granted by the Graham International Implant Institute).

Dr. Adler said that any bad results they’ve seen in HyProCure patients are usually because these patients were not properly tested before the procedure.

It’s important to have both a weight-bearing CAT scan, which gives a 3-D image, and a weight-bearing fluoroscopy, a test that assesses movement, so the podiatrist can see clearly how the foot functions in real-world scenarios and make sure there are no bony blockages that would interfere with the stent.

At Adler Footcare, they also offer stem cell injections with HyProCure to expedite the healing process.

Recovery time with the HyProCure procedure with stem cells is minimal, typically three to five days in a walking boot, and then it’s back to sneakers, with no running or jumping for six weeks.

Dr. Adler said it’s very important that patients who want HyProCure go to designated Centers of Excellence to get the best outcomes. His clinics offer free consultations to assess if the HyProCure treatment is right for patients.

“We’ll tell them right away if it’s worth pursuing,” he said. “If it turns out that their feet are misaligned, then this treatment can quite literally change their lives. It is rare that something comes along that makes this kind of an impact in people’s lives, and we are thrilled to be able to offer the kind of hope that comes with HyProCure.”