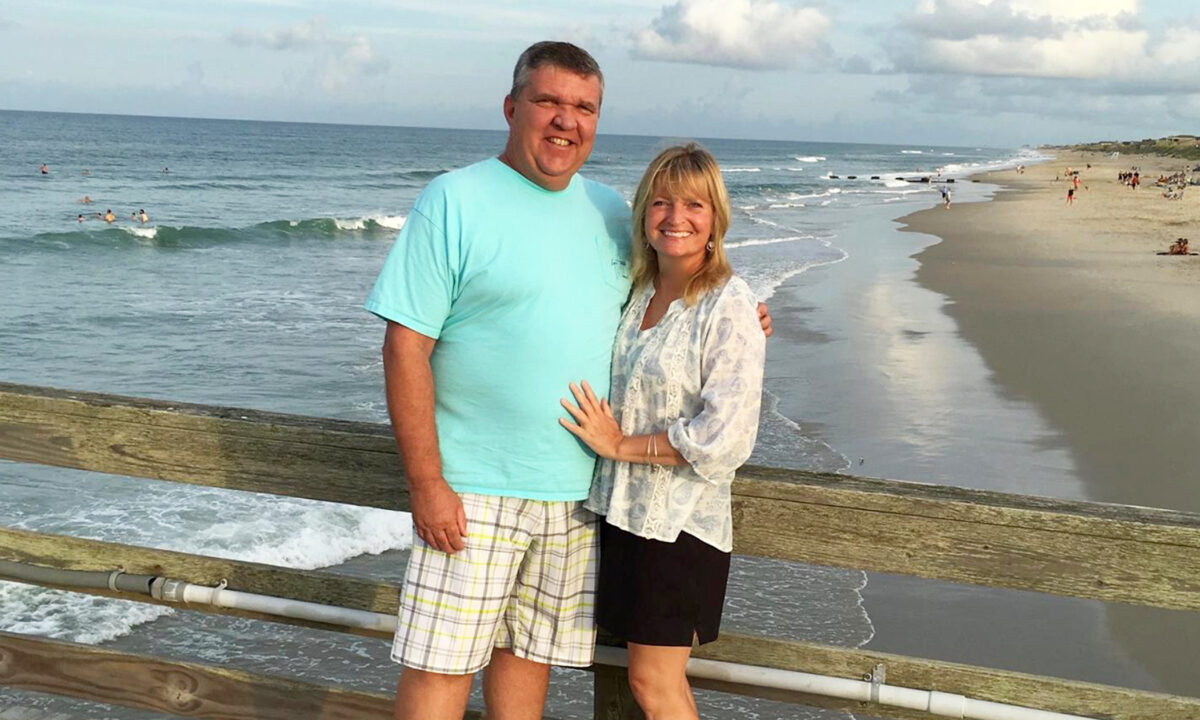 A happily-married Virginia man diagnosed with early-onset Alzheimer’s at the age of 41 was given four to five years to “get his affairs in order.” Yet, bolstered by his wife’s love and support, their faith, and their deep mutual understanding, he has lived 16 years past his diagnosis and celebrated his 35th wedding anniversary to the woman he loves.

The couple first met when Christy was still in high school, working at a Hillside Cinema movie theater in her small Virginia hometown, Gloucester. Don was a regular visitor, yet never approached her. He moved to Idaho with his family after graduation. It wasn’t until two years later that he returned and rode past the cinema on his motorbike, catching Christy’s attention.

“He came up and started talking to me, and we just became friends,” Christy told The Epoch Times. After eight months, they tied the knot on May 2, 1987, when Don was 22, and Christy was 21.

As it turned out, Don had a crush on Christy since the beginning.

“I told my buddies, ‘I’m gonna marry her when I get back,'” he recalled. “My first impression of her was there’s no way a girl like that would even talk to me … it just so happened that my family had moved away, but she never moved away from inside my mind.”

Christy wanted light, laughter, and the Lord in her life, and Don provided all that to her. They welcomed a son in 1989, who grew up to become a school teacher in the STEM program. “We’re very proud of him,” said Don.

Christy has battled multiple sclerosis (MS) since her late teenage years. Her official diagnosis came right after she married Don. With no drug-altering medications yet on the market, she got involved in medical trials and was placed on the very first MS medication, Betaseron.

“Sometimes, God wants you to build your character, or learn lessons,” she said. “But I now know that everything I went through, my experiences, were so that when Don was diagnosed I could act quickly.”

At the age of 38, Don was in a high-responsibility job that he loved as supervisor of a construction crew for Verizon telephone company.

However, when Christy began getting reports from some of Don’s men that he was locking himself out of his office and car several times a day, falling asleep at work, and making out-of-character statements; alarm bells rang.

Additionally, Christy started noticing that Don, who’s always been musical and played bass guitar for the church band, local orchestras, and community theaters, was “messing his music up.” At this time, she suspected he was having seizures, and took him to see her neurologist, who agreed with her.

They soon moved him to the University of Virginia, which is a teaching hospital. Don was put on a seizure study for a week where his brain was monitored. There, they realized he wasn’t having seizures, but confirmed there was something definitely wrong with his brain. They then began the long process of diagnosis.

“It took two years to get a definite diagnosis of Alzheimer’s,” Christy said. “They told us, because he was so young, just 41, that the disease would go quickly; he probably had four or five years to live at home and get our affairs in order.”

After receiving the shocking diagnosis, the couple couldn’t believe it, as they thought the disease only affected old people.

They then ended up at Johns Hopkins, as Christy found out that her husband was eligible for Alzheimer’s drug trials, despite his young age. Don retired from his job at the telephone company as he didn’t want to say hurtful things to anyone, and Christy went “full throttle” on finding new trials and keeping Don safe at home.

The couple sifted through the well-meaning advice of friends—”You should eat this,” or “Do puzzles, that will bring your memory back,” Don recalled—preferring to find their own way. In 2012, Don became one of just 30 Alzheimer’s patients to be fitted with a deep brain stimulation (DBS) device, a pacemaker-like piece of apparatus implanted into his brain. Christy said that this has helped him to still communicate and share.

However, after Don’s Alzheimer’s diagnosis, he struggled to find a sense of purpose, since he really liked his job. But Christy was resolute and explained that Don’s “new job” would be to fight the disease, every which way they could.

Despite the change in focus, Don was willing to try for the sake of his son, possible future grandkids, and the world at large. With some financial support from a disability program he paid into before leaving his job, he and Christy began sharing his story to educate others on early-onset Alzheimer’s, even filming a PBS documentary for YouTube to that end.

Nonetheless, it wasn’t all that easy; Don still struggled with his changing role.

“It took a while for me to get over the fact that here I am, 40-some years old, walking away from my job, not being able to support my family anymore because I hadn’t built up retirement savings by then,” he explained. “We had no idea what our finances were going to be.”

Christy maintains that the couple “couldn’t have done this without God,” and the massive success of Don’s DBS device is the reason he’s able to speak today.

“Would somebody like myself be privileged enough to continue to have the right to speak?” Don said. “I mean, it’s just, it amazes me.”

Christy shared that, usually, the younger patients they saw went really quickly, but Don is in his 16th year, and it’s amazing. For them, this is really a “miracle.”

Over the years, Christy has learned how to steer her husband toward rest and sleep, or administer medication when needed, with the support of their doctors, and Don has placed his full trust in his wife, claiming she is his “anchor.”

“The Alzheimer’s has me kind of just floating out here … she literally is my anchor,” he illustrated. “I’m on a little raft, and that’s the only thing that keeps me from floating away in the wind. I know all I have to do is grab that rope and pull a little bit, and she’s right there. We know that about each other, I just happen to be the one that’s at the mercy of the wind.”

Christy explained that patients with Alzheimer’s usually lose their filters a lot of times and say things that they usually wouldn’t say. Nevertheless, she has understood Don really well and knows that he would never say things to hurt her or anyone else, and thus even if he says something, she knows it’s not him but the disease talking, so she doesn’t expect an apology from him.

Christy has also encouraged her husband to continue being an active member of society. In the early days, they were still able to go out with friends and attend church, but as his disease progressed, his capacity for social interaction shrank. Don claims it’s “like you start off with an onion, and then little by little, over time, the layers start to peel back.”

As a caregiver, however, Christy still tries to make each day successful. She explains that, on certain days, they still go out for lunch, but on other days, they stay at home. The couple also takes each day as it comes despite how Don wakes up every morning.

Moreover, Don’s condition hasn’t eradicated the romance in his and Christy’s relationship.

“Every day, I get to love the same woman; because of my illness, she has to learn to love someone different every day,” Don said.

The couple also share innumerable fond memories of their 35 years together, including a funny memory from the day they tied the knot.

Christy regaled: “Our family had gotten us a limo … we’d never been in a limo. We got in and I’m sitting in the back, here [Don] comes, he sits in the back, and the limo driver puts the glass down.

“I’m thinking we’re gonna hold hands and maybe kiss, and just talk about what a wonderful day it is,” she continued. “I had expectations. Right expectations? Wrong! My new husband moves up to the front of the limo, right next to the glass, and the entire hour to get to our hotel he talks to the limo driver!”

Indignant at the time, Christy now laughs whenever she recalls the farcical moment.

Over the years, Don has recorded many of his most profound feelings on paper. In 2019, he published a book, including poems he wrote about his wife, which Christy holds dear.

Besides his poems, the 57-year-old’s romantic gestures are often less traditional than chocolates and flowers. “If I have a good day, and I get up, move the furniture out, and vacuum the whole house, she would rather have that,” he explained.

“So many people want that quick feeling of excitement. To me, that’s cut flowers,” Christy agreed. “What you need to build is that foundation of faith and friendship and laughter; build that base, and let the relationship mature. To me, our relationship is more like a potted plant.”

It’s all about letting go of expectations and trying to do a little better than yesterday, every single day. It also helps to remember the “special things,” said Christy, who hasn’t lost sight of why she fell in love with Don in the first place.

“I’ve lived most of my life with him, versus the other way around,” she said. “The one thing we always know is that no matter what, we’re there for one another.”

Share your stories with us at emg.inspired@epochtimes.com, and continue to get your daily dose of inspiration by signing up for the Inspired Newsletter at: https://www.theepochtimes.com/newsletter