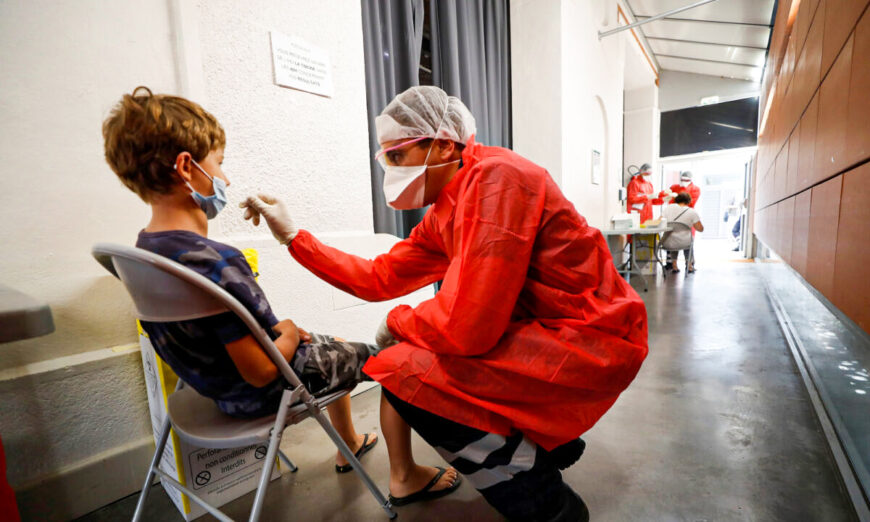 A firefighter from the Marseille Naval Fire Battalion administers a nasal swab to a child at a testing site for COVID-19 in Marseille, France, on Sept. 17, 2020. (Eric Gaillard/Reuters)

Health officials have received reports of hundreds of children across 33 countries, including the United States, diagnosed with acute hepatitis of unknown origin that is clinically more severe than previous similar cases and with a higher proportion of young patients developing liver failure.

The World Health Organization (WHO) said in a May 27 statement that it had received reports of 650 probable cases of acute hepatitis of unknown origin in children between April 5 and May 26, with the reports coming as researchers theorize about a possible link to COVID-19, the disease caused by the as the CCP (Chinese Communist Party) virus.

“The aetiology of this severe acute hepatitis remains unknown and under investigation,” the health agency said. “The cases are more clinically severe and a higher proportion develops acute liver failure compared with previous reports of acute hepatitis of unknown aetiology in children.”

An additional 99 cases were pending classification as of May 26, with the potential to bring the total case count to 749, if confirmed.

Nearly 60 percent of the reported cases were in Europe, with 222 from the United Kingdom alone. Of the 240 cases reported in the Americas overall, 216 cases were recorded in the United States.

It comes after the Center for Disease Control and Prevention (CDC) in late April issued a nationwide health alert about a cluster of nine children in Alabama identified with hepatitis and adenovirus infection, with no known cause.

The children were between one and six years old, all previously healthy, with five of them admitted to hospital with significant liver injury, including some with acute liver failure.

“Hepatitis A, hepatitis B, and hepatitis C viruses were ruled out,” the CDC said, adding that all the children tested positive for adenovirus.

The agency called on physicians to be on the lookout for symptoms and to report to the local health department any suspected cases of hepatitis of unknown origin. The typical symptoms are dark urine, light stool, vomiting, and jaundice.

The CDC later issued a report saying that none of the Alabama children tested positive for COVID-19 when they were taken to the hospital. The agency also said that none of the children had a previously documented case of SARS-CoV-2, also known as the CCP virus, nor had they received the COVID-19 vaccine.

Some research suggests that a previously unrecognized infection with the SARS-CoV-2 coronavirus could be behind the mysterious cases of severe hepatitis in children.

Children with COVID-19 are at significantly increased risk for liver dysfunction afterward, according to a report posted recently on medRxiv, which has yet to be peer reviewed.

But most of the children with acute hepatitis—which is generally rare in that age group—do not report a previous SARS-CoV-2 infection. Instead, most of them have been found to be infected with an adenovirus called 41F, which is not known to attack the liver.

A separate team of researchers suggest in The Lancet Gastroenterology & Hepatology that it’s possible that the affected children, many of whom are too young to be vaccinated, may have had mild or asymptomatic COVID-19 infections that went unnoticed.

A theory put forward by the researchers is that lingering particles of the coronavirus in the gastrointestinal tract in these children could be priming the immune system to over-react to adenovirus-41F by producing high amounts of inflammatory proteins that then damage the liver.

“We suggest that children with acute hepatitis be investigated for SARS-CoV-2 persistence in stool” and for other signals that the liver damage is happening because the spike protein of the coronavirus is a “superantigen” that over-sensitizes the immune system, the researchers said.

Other experts have put forward the theory that, as a result of social distancing and other COVID-19-related countermeasures, young children have had less of a chance to be exposed to adenoviruses, which would have helped build up their immunity. In such cases, it is theorized, the children’s immune systems may respond to an adenovirus infection by over-producing inflammatory proteins.

More study is required to confirm either theory, according to Dr. Rima Fawaz, a pediatric liver disease specialist from the Yale School of Medicine.