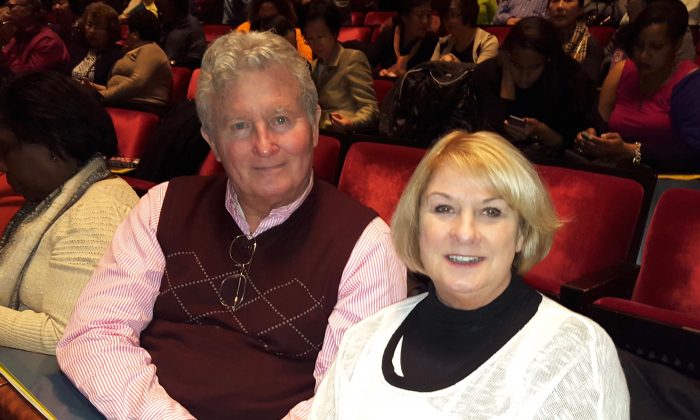 Rosemary Peacock, recently retired, said it told an overarching story more important and more universal as well: “It tells a story that regardless of what people try to restrict in human nature, they will find a way to bring back where we really come from. And that’s what I’m seeing here—the true spirituality of China coming through.”

It talks to your soul.
— Rosemary Peacock

“Absolutely stunning, stunning, the dancing, the song. It talks to your soul. That’s what it talks to,” said Mrs. Peacock. She attended the performance at Lincoln Center on March 6 with her husband William Peacock, a retired engineer.

The revival Mrs. Peacock alluded to is specifically Shen Yun’s mission. The New York-based company aims to present the authentic divinely inspired culture, which was nearly completely destroyed in China in recent decades. When communism came into power in 1949, it began to target and uproot the traditional culture; burning books, razing temples, forcing atheism on its people.

Mrs. Peacock said it was a shame this culture has been stamped out in China because it is beautiful and graceful, and Shen Yun was designed to show it all so beautifully.

“The artistic value of it is really just very, very stunning,” she said.

She said there was a power behind the grace of the performance, and it came through in the strength portrayed by the men and the elegance in the women. The characters in the stories showed bravery, and the movements of the dance were unbelievable.

“I just feel the presence of it,” she said.

“I’m glad that they’re not losing this culture,” Mrs. Peacock said. “They’re telling a story of their culture, …. not to let that ever, ever, ever die. Many things are lost in our modern world today, but we have to remember where we came from.”