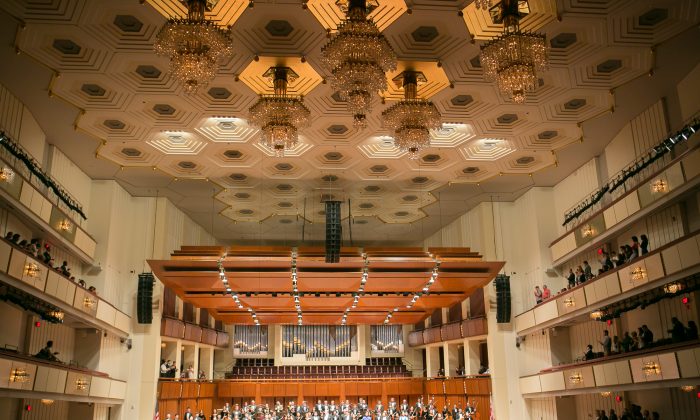 WASHINGTON—Just listen to any one piece by Shen Yun Symphony Orchestra for one minute, and you will understand the power and depth of meaning behind the music performed by the company, said Chinese human right activist Chen Guangcheng after attending a concert at the John F. Kennedy Center for the Performing Arts on Oct. 11.

And it is a creative and emotive combination that Shen Yun Symphony Orchestra, part of the New York-based Shen Yun Performing Arts company that aims to revive China’s culture, has achieved, Mr. Chen explained. The orchestra incorporates instruments like the ancient Chinese pipa and erhu into a full Western orchestra.

The program this year includes pieces composed by Tchaikovsky and Sarasate along with original Chinese compositions. The orchestra is quite unique in the world for its seamless combination of Chinese melodies and the grandeur of a Western symphony.

It is a difficult feat, as Western and Eastern instruments play on different scales, and this sort of harmonization has never been achieved before.

“The orchestra’s ability to be expressive is extremely powerful,” Mr. Chen said. A closer look at how the orchestra has achieved this shows also what Mr. Chen wishes to see happen in China.

The blind Chinese human rights activist and lawyer, who had been imprisoned in China but fled to the United States, is a visionary and idealist with an appreciation for nature.

He used a metaphor of nature to explain the wonder of his experience listening to the original compositions. Using one of the pieces as an example, he said, you can feel the nuances like trickling creeks in the music one moment, and open the floodgates of emotion in the next.

The sort of harmonization between the Chinese and Western instruments and sounds gives the listener a much more magnified experience of expression, he said, more so than listening to just Chinese or just classical Western music.

They say it takes ten years of work for one minute on stage—you can tell there was a tremendous amount of heart and effort put into this concert.
— Chen Guangcheng

“They say it takes ten years of work for one minute on stage—you can tell there was a tremendous amount of heart and effort put into this concert,” he said.

That concept of harmony is close to Mr. Chen’s heart. In China today, the term’s meaning has been warped. People take it to mean assimilation, or to be all equal, all the same.

“In traditional Chinese, the meaning is different,” Mr. Chen said. The second character denotes cooperation, while the first means to complement. It means that everyone should maintain their individual characteristics, but work together—complementing and cooperating—to create harmony.

He sees this in the instrumentation—the erhu maintains its unique sound and way of playing, the flutes and horns don’t alter their sounds either, and neither do the strings or percussion. But when the instruments play and rest, it is all in harmony, he said.

Conductor William Kuo has explained this when talking about how Shen Yun accomplishes such a seamless blending of sounds in past interviews. The composers understand and retain the characteristics of each school of music, and play to their strengths. The Western symphony harmonizes, providing the backdrop, while the Chinese instruments focus on the distinct flavor of individual instruments.

And this is the sort of harmony people in China should understand, according to Mr. Chen.