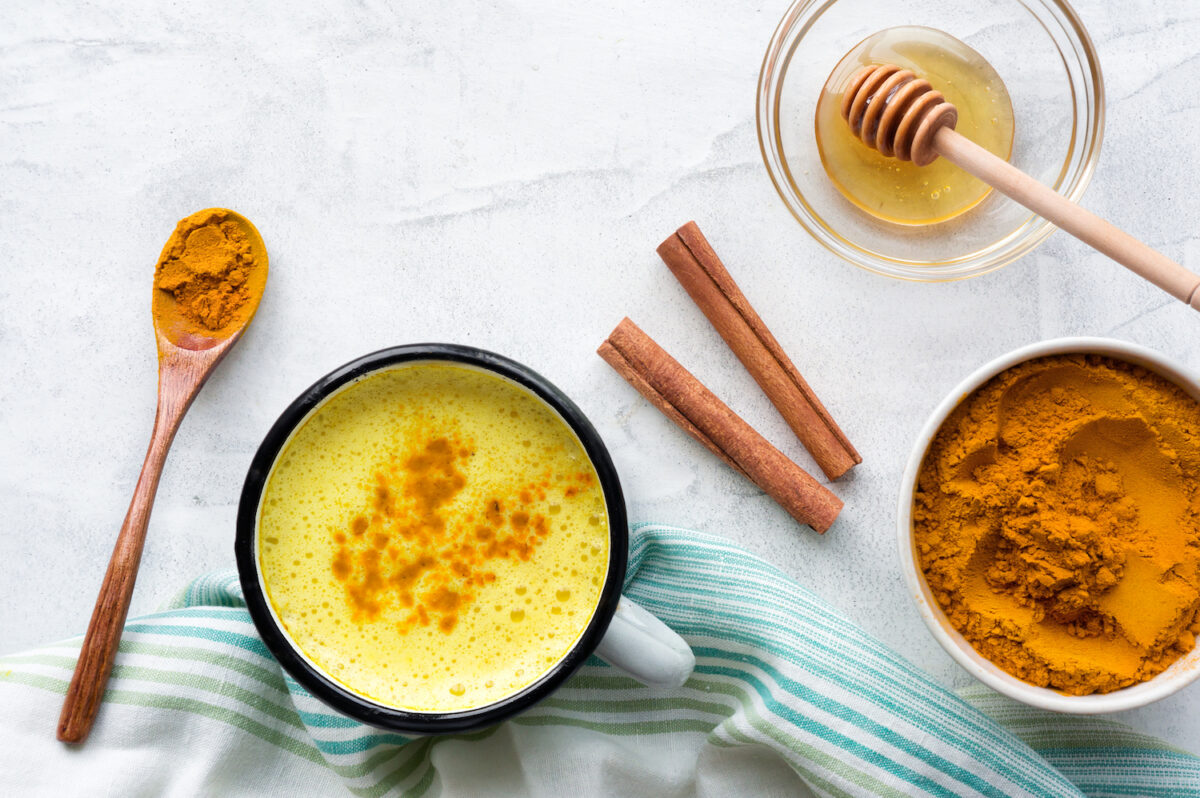 How to Optimize Curcumin Absorption – With Golden Milk Tea Recipe

Turmeric is a bright yellow root with a tan skin that is typically used in Middle Eastern, Northern African, and Southeast Asian cuisine. Turmeric is one of the main ingredients in curry spice blends and it makes a great addition to soups, meats, salads, stir-frys, and more. It’s a very versatile herb that enhances the flavor of a great many dishes.

Curcuminoids are the beneficial compounds within turmeric. Specifically, curcumin, one of these specific compounds, is considered to be the most potent, medicinally powerful, cancer-killing component of turmeric. Curcumin helps to detoxify and rejuvenate the liver, reduces negative effects of iron overload (and this is important because iron with sweet wormwood is a powerful cancer killer, too), increases antioxidant capacity in the body, regenerates brain cells and improves cognitive function, reduces likelihood of and treats Alzheimer’s, is anti-inflammatory, reduces heart disease risk, reduces depression, and fights premature aging.

How does curcumin kill cancer? It literally kills cancer.

The Murderous Aspect Of Curcumin

The human body contains approximately 10-13 trillion cells. We replace these cells at the rate of approximately 100 to 130 billion each day. A tightly regulated, cell- suicide process known as programmed cell death or apoptosis destroys cells.

Cancer cells don’t suicide. They turn off the suicide genes.

Curcumin activates the death receptors through many different means, ways we are still learning. One of the more interesting ways is by activating enzymes that literally chop up the proteins within the cells. It is believed that one of the reasons cancer cells do not develop some sort of resistance to curcumin like they do with chemo drugs, is due to the fact that curcumin activates the cells death in so many different ways. We also don’t know exactly why curcumin doesn’t kill normal healthy cells, but it doesn’t. It seems to simply target the cells that were supposed to have already died.

Our bodies want to dispose of most of the curcumin we eat. Without help, our ability to absorb curcumin would be very low.

How to Increase the Bioavailability of Curcumin

The only problem with curcumin is that our liver, in an effort to prevent excessive drugs and supplements and such, inhibits most of the absorption of curcumin (a process called glucuronidation), which makes the compound much less effective than it could be. But there are ways to increase the body’s ability to absorb curcumin.

Piperine is the alkaloid responsible for the pungency of black pepper. This compound inhibits certain enzyme metabolism functions, which normally cause the disposal of what the body considers to be excess curcumin (this effect is not limited to curcumin, black pepper can increase the absorption of other supplements, too). Curcumin absorption increases up to 2,000% or more with just a small amount of piperine.

Curcumin is fat-soluble. Without fat, the compound doesn’t dissolve properly, and then curcumin has a tough time getting into the gut and being absorbed into the bloodstream and then into the cells that needs the compound.

Quercetin is a plant flavonoid that inhibits the enzyme that deactivates curcumin.

This is a new twist on an ancient way of experiencing the benefits of turmeric. Ideally, use all fresh, unadulterated herbs whenever available.

Mix it all up and drink. For the drink to be warm, warm up the coconut milk only, but be careful not to cook the other ingredients. Add them in when the coconut milk is not too hot to drink so as to preserve enzymes and other fragile micronutrients.

I love this drink and do not feel the need to sweeten it (I prefer not to feed Candida). I have not tried adding quercetin into the mix, but I’m going to next time I make the drink. I’m thinking of either adding capers, which I think is going to taste really strange. I’ll drop a comment below when I try this addition and let you know what it tastes like.

For maximum potency and absorption, we recommend fresh, raw turmeric root with its skin, taken as mentioned above, as well as cooked turmeric with skin. Try juicing and using as a spice with meats, salads, and soups. Incorporate both into your healthy diet and you’ll get the most benefit.