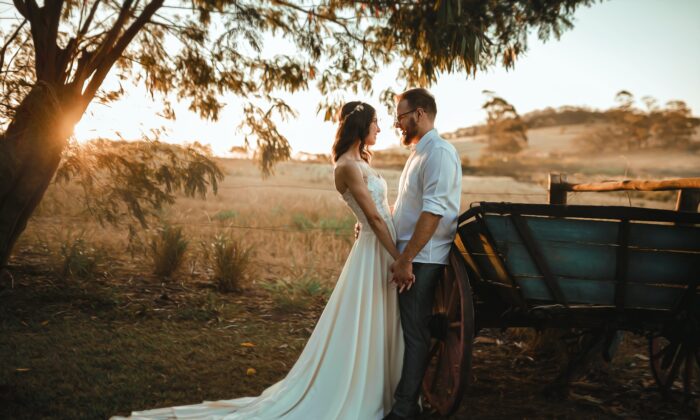 How to Make the Most of Your Marriage

Tips on keeping the fires of love alive
By Jeff Minick

One of the biggest days of your life has come and gone.

You’ve stood up before a group of people and taken vows you’ve sworn to uphold. Perhaps you followed up that event with a gala, an evening of dining and dance, or perhaps you left some clerk’s office in City Hall and drove back to your apartment. Perhaps you then headed out for a week at Martha’s Vineyard or a weekend in the mountains.

Whatever the case, you’re now married. In the words of yesteryear, you’ve plighted your troth to another. You’ve promised your beloved to honor a union of flesh and spirit, to stick together in the good and bad seasons of your love. As the traditional words put it, you’ve vowed to be wedded, “to have and to hold from this day forward, for better, for worse, for richer, for poorer, in sickness and in health, to love and to cherish, until we are parted by death. This is my solemn vow.”

Flash forward 10 years. You and your spouse have three children under the age of 8, you’re having trouble making the mortgage payments, and your mom is unloading advice on you about marriage and childrearing like some longshoreman unpacking a container ship out in Los Angeles.

Some folks warn, “Old age isn’t for sissies.” The same might be said about marriage. If we let it, marriage can be one bumpy old road.

So how can we keep that road smooth and in good repair? How do we honor those vows, keep the fires of love alive, and get the most out of our marriage?

Most of us know O. Henry’s short story “The Gift of the Magi” about a poor couple at Christmastime. Della sells her beautiful hair to buy Jim a platinum fob chain for his treasured watch, and Jim sells his watch to buy his young wife a set of combs for her hair.

When we revere our spouse, when we cherish that special relationship, like Della and Jim we become magi bearing gifts.

For years after my wife Kris’s death in 2004, I tormented myself by wondering whether I had failed to give her such gifts. Could I not have treated her better? Could I not have thanked her more for her many kindnesses or told her more often how much I loved her?

One day, at a memorial service for my wife’s mother, Kris’s best friend from childhood and I were eating lunch opposite each other in the church’s hall. We talked a bit about Kris and her death, and then Susie paused, looked me square in the eye, and said, “I hope you know you were the love of her life.”

That burden I’d carried for years immediately fell away.

Long ago, Kris and I took classes in conversational German at a community college in preparation for our honeymoon. When a much older couple in the class learned we were to be married, they beamed their congratulations. Then the elderly gentleman turned serious, wagged his finger in our faces, and said, “Just remember. Respect. Respect for each other is the key to a happy marriage.”

For the rest of the time Kris and I had together, I frequently thought of that man and did my best to heed his advice.

Respect is the first cousin of reverence and has many faces. It means listening. It means biting our tongues when we’re angry rather than arguing or spitting out hurtful words. It means trying to understand our spouse’s point of view when we come to loggerheads.

Like everyone else, couples can become swept up in routine, burdened by the demands of daily living, household chores, caring for children, and meeting other obligations. Frequently, this whirlwind leads them to neglect their marriage.

Just as their commanders send combat-weary soldiers off the battlefield for R&R, or “rest and recuperation,” couples should do the same. This marital R&R, meaning “recreation and rejuvenation,” doesn’t necessarily mean a month on the beaches of Hawaii or a couple of weeks at a rental house on the North Carolina’s Outer Banks, though both sound wonderful.

No—this time away from the battleground of duty and stress can be much simpler than making some long excursion. A weekly or monthly date night; a walk together in the evenings, even with the children in tow; watching a movie together while holding hands; a glass of wine shared on the back deck or on the tiny porch of an apartment: these small moments, seemingly so insignificant, accumulate over time and forge bonds between husbands and wives. They create the links that help preserve marriages in tough times.

This recreation, or if you will, re-creation, also brings a renewed vigor to the relationship, a daily resurrection of devotion and love.

How many of us at age 50 pause to remember why we fell in love and married at 25? Do we look at our husband or wife through the lens of all the years we’ve spent together? Do we remember the girl we fell in love with, her close-clipped hair, the laughter we shared in that bakery when we bought her the Raggedy Anne cookie jar after she commented on it, the night on the Boston Esplanade when we celebrated the Bicentennial together? Do we remember that awkward young man who stumbled over his words when he introduced himself, who brought us flowers when he showed up at the door for that first date, who six months later dropped to his knees and asked for our hand in marriage?

Memory is a wonderful tool for keeping a marriage alive and vibrant. Whether we spend time exchanging these memories with each other, laughing over some silly incident from the past, or ruing a mistake, or whether we reminisce in private, recognition of the past we’ve shared strengthens marriage.

Studies have shown that happy marriages bring unexpected benefits. Married people have lower stress levels, for example, they tend to live longer, and they even get better sleep. There are tax benefits, and couples have less of a tendency toward depression and better outcomes after surgery.

All well and good, but of course no reason to marry.

No, we marry hoping for love and companionship, for the adventure of a lifetime, for the mutual joys and sorrows, for the daily kindness and tender graces, and for the mysteries in the other that time and familiarity will never, thank goodness, fully solve.