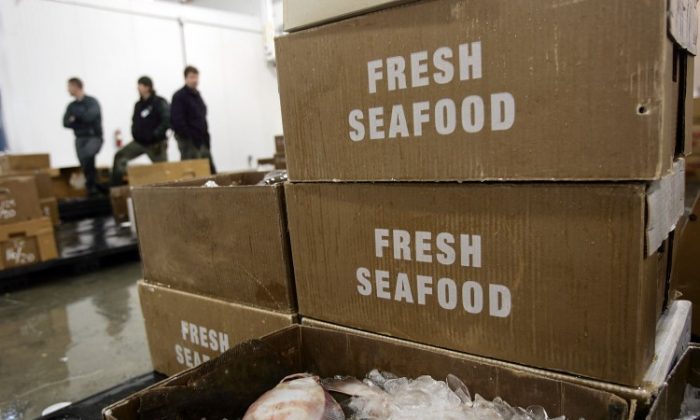 Despite the fact that 85 percent of seafood used in North America is imported from nations with varying standards for aquaculture, the health benefits of fish still outweigh the risks, doctor says. (Spencer Platt/Getty Images)
Health News

How Safe Is Your Seafood?

“You should eat more fish” is a remark I often make to patients. But I find that recently more patients reply, “But are fish safe to eat?”

They worry about the amount of mercury and PCBs that may be in fish. So today when it appears that everything has a touch of contamination, how safe are fish to eat?

A report from the Johns Hopkins Center for a Livable Future, published in Environmental Science and Technology, analyzed seafood inspection data from the United States, Canada, Europe, and Japan.

It states that today 85 percent of seafood used in North America is imported, and much of it is farm-raised (a practice called aquaculture) in Asia and elsewhere in the developing world.

One negative is that other nations have varying standards for aquaculture. For instance, they may use drugs that are banned in North America. But the big negative is that North American officials do not inspect most overseas farms. This means that only a fraction of imported seafood is tested for drug residues, microbes, and heavy metals.

In fact, on the world stage, U.S. inspection leaves much to be desired. For example, the Hopkins report says the FDA (Food and Drug Administration) in the United States checks only a mere 2 percent for these contaminants. This compares with 20 to 50 percent in Europe, 18 percent in Japan, and 15 percent in Canada. Moreover, Europe tests for the presence of 34 drugs, but the United States tests for only 13.

There was more bad news for me. I love shrimp, but according to Hopkins’ researchers, shrimp and prawns were the seafood that most often exceeded drug- residue limits. Crab, basa (a kind of catfish), eel, and tilapia were other problem fish—many of which are farmed.

Vietnam was the country that had the most drug violations, followed by China, Thailand, Indonesia, India, Taiwan, and Malaysia.

The question is, how much of a problem are drugs that are used to control diseases when fish are so crowded in farm operations? The greatest hazard is for farm workers. For the rest of us, no one knows how much chronic low-level exposure harms us. There’s also concern that bacteria may develop resistance to antibiotics.

So, if like me, you enjoy fish, how can you eat it without becoming depressed? Dr. David Lowe, author of the Hopkins study, suggests trying to locate domestic farmed seafood, which has a greater chance of being inspected. And if you’re lucky to live in Canada, there is no history of export violations.

It’s best to select small fish, which are less likely to contain contaminants and have higher amounts of omega-3 fats. But since larger fish eat these smaller fish, they have a higher concentration of contaminants. Wild and canned salmon are always a good choice.

Remember too that all fish are not created equal. A three-ounce serving of farmed salmon contains over 2,000 milligrams (mgs) of omega-3 fats. Shrimp have only 250 mg.

If you’re looking for fish with high amounts of magnesium, which protects against fatal cardiac arrhythmias, order tuna or crawfish. If you’re concerned about blood cholesterol, boiled or steamed lobster has only 72 mgs per 100 grams compared to 75 for skinless chicken and 2 poached eggs.

Looking at the total picture, the health benefits of fish far outweigh the risks. In fact, while I write this column, researchers report that people who eat fish regularly were 12 percent less likely to develop colon and rectal cancer.

Today, there are many risky contaminants in our air and water that are worrying. But I’m not losing any sleep over those in fish.