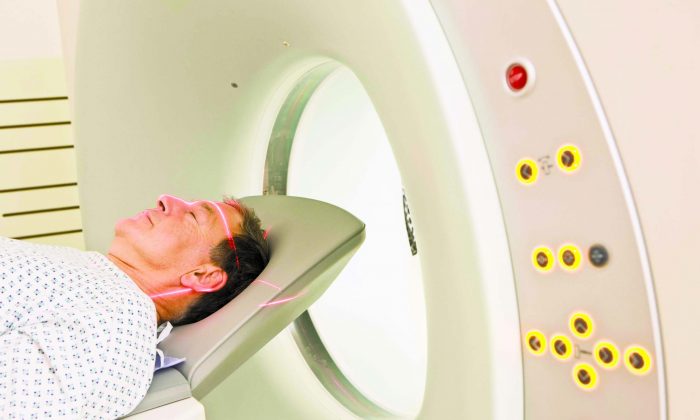 CT scans are used to diagnose cancer, heart problems, kidney stones, and injuries. Obviously, a three-dimensional view of the body saves lives. But the effects of radiation are cumulative. The more CT scans, the greater the danger, and your body keeps an accurate score. (Jupiterimages/photos.com)
Alternative Health

How Many Patients Would Agree to 500 Chest X-rays?

Does the doctor always know best? Normally the answer is yes. But when your doctor orders a CT scan (computed tomography), does he really understand the amount of radiation your body receives?

A recent report from the University of California expresses concern about the overuse of the many types of scans performed in the United States. So what can patients do to protect themselves from needless radiation?

CT scans are used to diagnose cancer, heart problems, kidney stones, and injuries. Obviously, a three-dimensional view of the body saves lives. But the effects of radiation are cumulative. The more CT scans, the greater the danger, and your body keeps an accurate score.

Today CT scans are the biggest source of radiation of all imaging technologies. For example, a CT scan of the abdomen produces 500 times more radiation than a single chest X-ray and 1,000 times that of a dental X-ray or bone mineral density test. I wonder how many patients would agree to 500 chest X-rays unless they were vitally important?

A study in the Archives of Internal Medicine says that 72 million CT scans were done in the United States in 2007. After excluding those done for cancer and those done in the last five years of life, researchers estimated these CT scans would cause 29,000 extra cases of cancer in the future and 15,500 deaths. Authorities claim that about one-third of CT scans are not needed.

Another more recent report in the Public Health Science’s Journal reassures women that a CT scan during pregnancy carries little or no risk to the fetus. But the authors admit that due to the small number of cases studied, the findings could have a wide margin of error. And children are more susceptible to radiation damage.

But what is amazing is the lack of knowledge about radiation dosage. The New England Journal of Medicine (NEJM) reported in 2007 that a survey of radiologists and emergency room doctors showed that 75 percent significantly underestimated the radiation dose from CT scans.

The Journal also reported that 1 million children in the United States were being given CT scans unnecessarily every year to diagnose appendicitis. It could be argued that ultrasound could provide as much information in diagnosing this disease as a CT scan.

A few years ago, a nuclear engineer told me he had asked how much radiation he was receiving from back X-rays. He was told “the same as you receive from a two-hour plane trip.”

Later the engineer calculated it would take 1,120 plane trips to equal the amount of radiation he had received. Or that it would take him 28 years in the nuclear plant to receive the same dose as the exposure in the clinic!

So what can patients do to decrease the risk of needless radiation? First, realize that some needless CT scans are done because doctors worry about missing a diagnosis and then being sued. It’s a justifiable concern, so don’t add to it by pressuring your doctor to do a CT scan just to be sure of the diagnosis.

Rather, it’s better to ask: “Is this test really necessary?” “Would ultrasound or MRI show the same result?” (Neither of these tests exposes you to radiation.)

Be careful where you get a CT scan. I reported years ago that a survey of X-ray facilities in Ontario, Canada, revealed that radiation exposure could vary as much as 90 times the normal dose. This disparity was due to old machines, failure to test them regularly, and inexperienced technicians. The report by the NEJM also shows that CT scan dosage can vary as much as 13 times the amounts cited.

Don’t be fooled by ads promoting the use of full body scans on healthy people to rule out cancer, cardiovascular disease, and other disorders. It’s a very questionable procedure. Also, beware the doctor who has a financial interest in a CT scan clinic.

It’s the old story, caveat emptor. Let the buyer beware, whether purchasing a new car or dealing with medical technology.