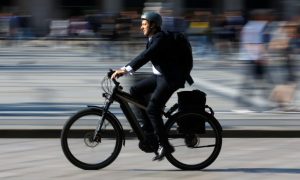 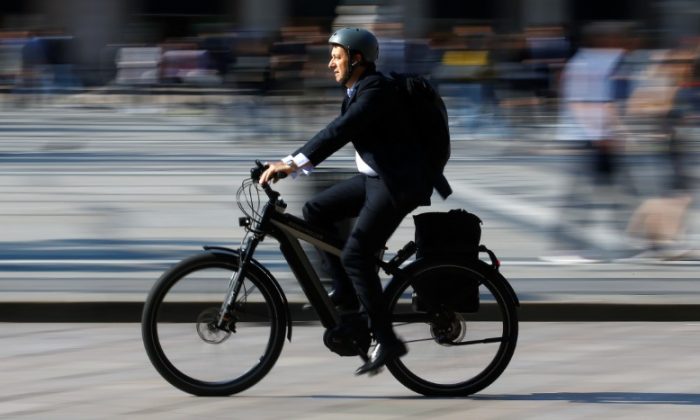 A man rides an electric bicycle, also known as an e-bike, in downtown Milan, Italy on May 18, 2018. (Stefano Rellandini/Reuters)
Mind & Body

Walking and cycling gained a higher profile than ever in 2020 as a result of the pandemic. Governments around the world encouraged individuals to go on foot or take their bikes where possible instead of using crowded public transport and invest in widescale cycling infrastructure to help them do so.

In the United Kingdom, the link between obesity and poorer COVID-19 outcomes and the country’s new strategy related to the disorder led to doctors prescribing cycling to improve patients’ health.

While manufacturers and retailers reported a rise in bicycle sales and cycling in general during the pandemic, there remain many people who may not feel fit enough to cycle very far (or at all), or have a long commute, or live in hilly places.

For these people, bicycles that provide electrical assistance, known as electric bikes or e-bikes, have proved an attractive option because they make cycling easier. As a result, sales of e-bikes also boomed in 2020, with manufacturers struggling to keep up with the demand.

The Advantages of E-Bikes

Requiring less effort to ride, e-bikes allow the user to carry more cargo than conventional cycles, and are often used for utilitarian purposes, such as shopping or commuting, as well as for recreation. E-bike owners have been found to cycle more frequently and for longer distances than conventional cyclists.

In Europe, e-bikes represent one of the fastest-growing segments of the transport market, with sales in Germany in 2018 accounting for 23.5 percent of all bikes sold, while more than half of the adult bikes sold in the Netherlands in 2018 were electric.

That was before the pandemic sent numbers through the roof. Now, industry groups say sales of e-bikes in Europe could double in the next five years. In the United States, electric bike sales jumped 84 percent in March, 92 percent in April, and then 137 may in May, according to market research firm The NPD Group.

A Replacement for Cars

Car travel is an essential part of everyday life for many people, but has a major impact on the environment through air pollution, particularly from congested traffic. As half of all car journeys in the United Kingdom are between 1 and 5 miles in length, substituting many of them with e-cycling is an achievable aim.

To explore the influence of e-cycling on travel, we conducted a scoping review of previous research. In 42 studies examining the impact of e-bike use on other travel modes, the proportion of car journeys substituted after people bought e-bikes ranged from 20 percent to as high as 86 percent. Adoption of e-cycling can therefore contribute at some level to reducing congestion, greenhouse gas emissions, and air pollution.

Who Benefits From E-Bikes?

We have also researched the health benefits of e-bikes in a 2018 systematic review of studies. In 17 studies involving a range of groups, we found that e-cycling provided physical activity of at least moderate intensity, which was lower than the intensity elicited during conventional cycling, but higher than that during walking. E-cycling can therefore contribute to meeting physical activity recommendations and increasing physical fitness.

Most people who aren’t regularly active could benefit from e-cycling. However, for those with health conditions such as obesity or Type 2 diabetes, who may particularly benefit from physical activity but often find it difficult, e-cycling may be an important way to become more regularly active.

Our research shows that rates of active commuting in these groups is low—just 5.5 percent for those with Type 2 diabetes. In response to this statistic, we conducted the first feasibility study to explore whether e-cycling was acceptable to, and could potentially improve the health of, people with this condition.

We recruited 20 people with Type 2 diabetes to use an e-bike for 20 weeks. We found that participants enjoyed using the e-bikes, cycling on average 21 km (13 miles) per week. Participants’ heart rate during e-bicycle journeys was 74.7 percent of maximum, compared with 64.3 percent of maximum when walking, a level sufficient to generate improvements in fitness. This is comparable to the changes seen when healthy inactive individuals take up conventional cycling.

The Future of E-Bikes

There is now increasing interest in the potential of e-bikes for other people who are recommended more physical activity but find this hard to achieve, such as those recovering from cancer. We can see a future in which doctors could prescribe e-cycling to patients, with a provision to buy bikes at reduced cost or spreading out the payments.

Although it has been a difficult year, there may be a small silver lining to the pandemic. With fewer of us commuting, and less motorized travel overall, the pandemic has driven a change in physical activity behavior and raised awareness of traffic congestion and air pollution.

With many of us exploring or re-discovering ways to be active outdoors and cut down on motorized transport, the future is bright for e-cycling. With the development of smaller and more efficient batteries, e-bikes will become lighter and have a longer range of travel, and will become a common sight on our streets.

Providers of e-bikes often refer to the e-bike smile—the look of joy on people’s faces when they try one for the first time. Try to remember how it felt when a parent held the back of your bike saddle and whizzed you along—the feeling is very similar.

If you haven’t yet tried an e-bike, we would encourage you to do so. They are great fun, will make becoming healthy a lot easier, and you may have a reason to look back on something positive from 2020.