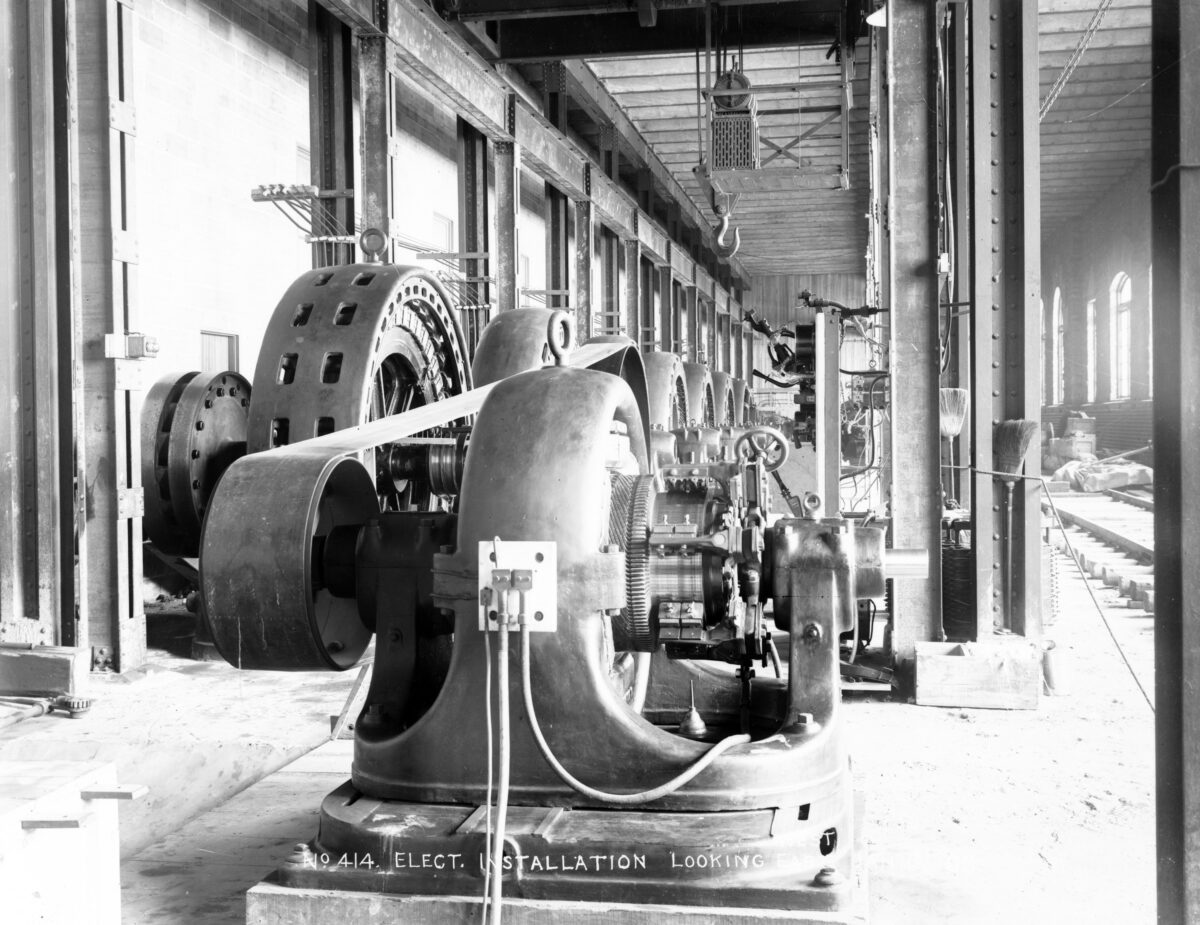 When the 1893 Columbian Exposition opened on the shores of Lake Michigan, visitors to the fair were treated to a glimpse of the future. Chicago, the great classical “White City” by day, at night became a magically illuminated world of colored lights.

President Grover Cleveland opened the exhibition by pushing a button that set the great dynamo engine in motion with its alternating-current generator providing power to thousands of incandescent bulbs. At that moment, America first saw the promise of electricity on full display.

Thomas Edison’s incandescent bulb was the great invention that would change the way people lived. No longer would the waning daylight mean the end of the working day. But Edison’s bulb was powered by direct current—and direct current couldn’t travel very far from the source of its generation.

Before America could be electrified, it was necessary for there to be “the battle of the currents.” Alternating current would ultimately be victorious because it allowed for the remote and efficient generation of power that we take for granted today.

George Westinghouse had pioneered the idea of alternating current (AC), while Edison promoted direct current (DC). The two men’s companies had vied for the contract to provide electric power for the world’s fair. Seeing it as an opportunity to market his ideas, Westinghouse bid low and won the contract. He told his workers to provide work of the highest quality as it would be an exercise in demonstrating the potential of AC.

Edison lawyers discovered that the bulbs Westinghouse planned to use were very similar to those Edison’s company had patented, so Edison brought a lawsuit against his competitor. Westinghouse responded by manufacturing a plug and stopper version of the light bulb—not quite as good as Edison’s, but different enough to avoid a patent violation.

Workers in Westinghouse’s factories worked feverishly to produce enough bulbs to light the fair. This loyal workforce was willing, it was said, to “march through fire” for George Westinghouse to meet his production deadline.

History is quick to point out the greedy exploits of America’s 19th-century captains of industry, but often forgets the noble contributions of men like Westinghouse. His ethic goes back to his early life, his war years, and his early fascination with steam powered devices.

In our day, the development of great works and human decency are often—but sometimes mistakenly—considered to be mutually exclusive. Westinghouse was a brilliant man, an innovator, and a captain of industry. He was worth millions of dollars, but he never forgot his humble beginnings.

As a youth, Westinghouse was not someone you would have thought likely to succeed. School bored him, and he preferred being in his father’s machinery shop, where he eventually found himself working at a very young age. He built a working steam engine that he would later patent in 1865. His fascination with steam, flow, and pressure would continue to inform him for his entire working life.

One Saturday, young George’s father gave him an assignment to cut down equal lengths of pipe. The task would have kept him busy all day (in those days, factories worked six days a week), but George’s scout group had planned an afternoon hike.

George created a jig that enabled him to cut the pipe handily in the morning, enabling him to go on the hike in the afternoon. His father was not pleased, but George was now inspired with the knowledge that innovation could improve the quality of life for people. He would discover that it could also save lives.

He Gave Them a Brake

George served in the army during the Civil War, an experience he credited with teaching him how to work with all kinds of people. When the war ended, the great growth of railroads and the western expansion of the United States would create new opportunities for this inventive young man.

At that time, trains were stopped by men hand-turning brake wheels on top of the train cars. As trains grew longer, these brakemen would run along the tops of the cars to turn each wheel by hand. As you might imagine, it was a dangerous job. Many brakemen died by slipping off the tops of train cars. Bad weather only made it worse.

Westinghouse developed a new braking system, made possible by compressed air, that changed the world of railroading by decreasing the number of railroad accidents that had previously filled newspapers across the country. It is said that novelist Charles Dickens had a phobia about traveling by train, and that fear was not unfounded.

Westinghouse had a railway engine and several cars set up to demonstrate his invention, and he arranged for railway executives to ride on this newly equipped train. The day of the test started with the train pulling out on what was to be a day-long excursion.

Early in the journey, the train passed through a tunnel, emerging to a grade crossing where a terrified driver was trying to free a horse-drawn wagon that had become stuck on the tracks. The brakes were applied—hard—and the train stopped just short of the wagon. The railway officials were so impressed that they said they needed to go no farther: the Westinghouse Air Brake had so quickly and efficiently proved itself.

While most of us remember that George Westinghouse invented air brakes for trains, few remember that when he built his great air brake factory outside of Pittsburgh, he also built beautiful houses for his workers and set up a monthly payment plan so they could buy them. He even insured the houses so that if a family were to lose its breadwinner, it would not lose its home.

And while other inventors like Thomas Edison accumulated many patents based on the work of their employees, Westinghouse assembled around him the best and brightest he could find and insisted that they receive attribution for their own patents. It is said that he would have well over a thousand patents had he registered them all in his own name.

His brilliant engineers were not all men, either. Because of his generous patent attribution policy, we know that he had in his employ one Bertha Lamme, whom the New York Herald called the “only woman electrical engineer in the country” in 1896.

Westinghouse went on to develop his AC electrical generation capability, which he spectacularly demonstrated at the 1893 Columbian Exposition world’s fair in Chicago. He continued to pioneer improvements in railway equipment, including electric locomotives and sophisticated block control systems, which greatly enhanced railroad safety.

He was inspired by his contemporary Nikola Tesla, the Serbian American inventor, electrical engineer, mechanical engineer, physicist, and futurist, who is best known for his contributions to the design of the modern AC electricity supply system. Westinghouse looked to Tesla’s work as he sought to make AC practical for powering America’s developing industries.

During his lifetime, Westinghouse founded over 40 different companies and made possible many of the appliances we take for granted in our homes today. He practiced the Golden Rule in his management style, and he firmly believed in the freedom of his workers. He chose to live out his beliefs by example rather than by preaching.

He was a modest and temperate man, always devoted to his wife, Marguerite Erskine Westinghouse. This quote says volumes about the man: “If someday they say of me that in my work, I have contributed something to the welfare and happiness of my fellow man, I shall be satisfied.”