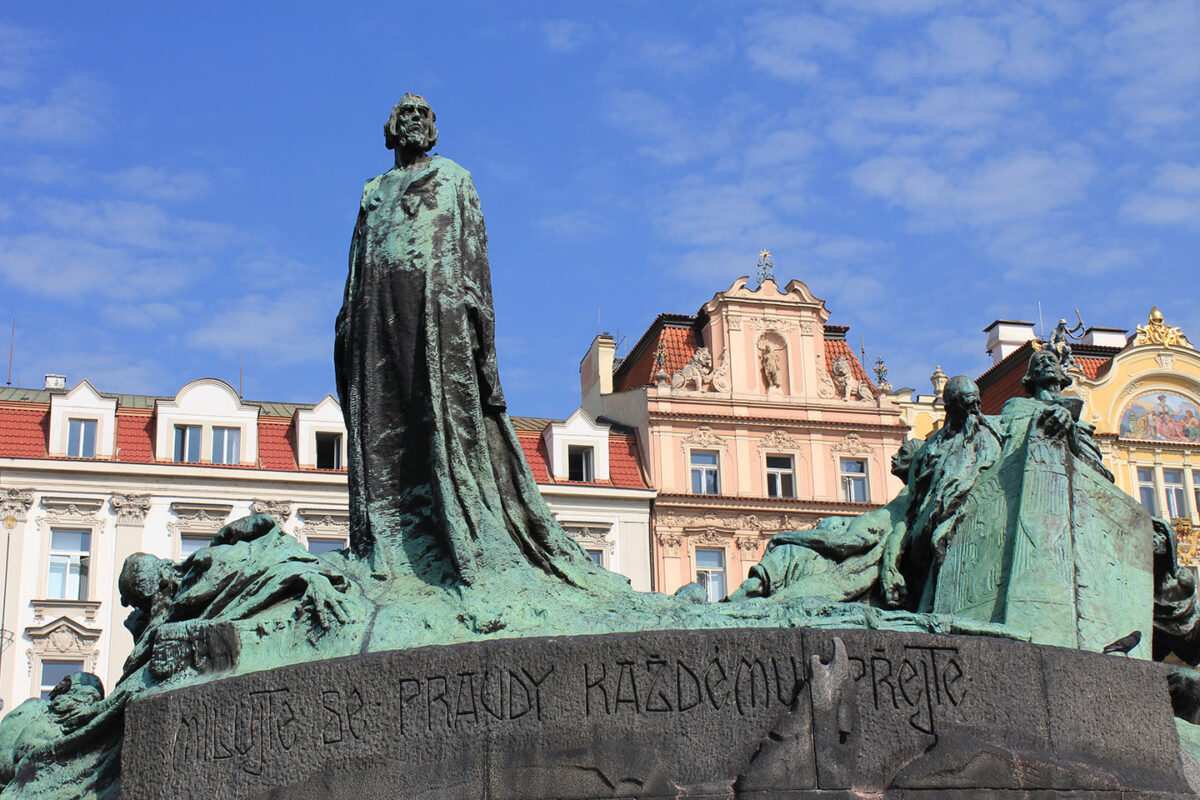 A monument to Jan Hus in Old Town Square, Prague. During the 1968 Prague revolt, Heda Kovaly passed this statue of the reformer who was executed during the Protestant Reformation. At the base of the statue are the words “Truth Prevails.” Kovaly thought: "Truth alone does not prevail. When it clashes with power, truth often loses. It prevails only when people are strong enough to defend it.” (Oyvind Holmstad/CC BY-SA 3.0)
Traditional Culture

The story of one Czechoslovakian woman who endured the Nazi and Soviet regimes
BY Jeff Minick TIMEAugust 10, 2022 PRINT

The last hundred years have brought humanity the bitter fruits of totalitarian regimes. Soviet Russia, Nazi Germany, Communist China, Cambodia, Cuba, and so many other places have served—and some still serve—as the killing grounds of raw ideology. Dachau, Auschwitz, and the Gulag are names known to most of us, but for every one of these death camps are a thousand more, many known only to the executed and their executioners.

These same regimes murdered not only the flesh but also the souls of those they controlled. They degraded aspiration and human kindness. They replaced love of God, custom, and culture with utter subservience to the state and its warped dogmas. In many instances, for example, ordinary people became spies, reporting neighbors and even family members to the state for what they regarded as treachery or a lack of loyalty.

A body of literature, still growing, has long sounded the warning about these horrendous depredations and the thugs who committed them. Anne Frank, Elie Wiesel, and Aleksandr Solzhenitsyn are only three of the writers whose works have recorded massacres, arrests, torture, and the suppression of liberties and rights. Behind them stand many others who endured these brutal circumstances and lived to bear witness to totalitarian savagery.

A Voice New to Me

Late in July, a friend recommended Kovaly’s “Under a Cruel Star: A Life in Prague 1941–1968,” which her daughter, recently graduated from college, had recommended to her. The library surprised me by owning a copy of this memoir; the book itself stunned me.

I tore through “Under a Cruel Star” in less than two days, reading on breaks from my work and late into the night. In some ways, it’s an easy read. The book is relatively short, Kovaly knows how to keep her story flowing, and there is plenty of suspense, though not the sort we find in the fast-paced thrillers of today.

But the speed with which I read Kovaly had little to do with these incentives. Instead, the message of “Under a Cruel Star” motivated me, a message from the past sent into the present, like a note in a bottle washed ashore by the sea. It gripped me and drove me forward.

Years of Fear and Terror

The first page of these reminiscences drops us straight into the fall of 1942 and Prague’s Exposition Hall, where the Nazis had begun the mass deportation of Jews like Kovaly and where the inside of the hall was “like a medieval madhouse.” Taken to Lodz in Poland, she and others were thrown into decrepit quarters in a ghetto, where the starving inhabitants lived like animals.

Later Kovaly was assigned work in a brickyard, where after an outburst of complaints from her, which normally might have led to her death, her boss sat her down in a darkened room and said, “Tell me.” The man was obviously aware of the meager rations and illnesses of the prisoners, but he listened in silence as she related the many horrors she has witnessed: the deaths, the murders of pregnant girls and elderly men, the gas chambers. At the end of her long, quiet litany of killing and abuse, the boss remained sitting when she left him, his head in his hands. “The man lived in Nazi Germany,” she wrote, “and had daily contact with a concentration camp and its inmates, yet he knew nothing. I am quite sure he did not.”

After Kovaly and some friends escaped while the Germans were marching their prisoners away from the approaching Russians, and after many close calls, she made her way back to Prague. Here, friend after friend, terrified of discovery, refused her shelter and help. Finally, a member of the underground contacted her, and she was rescued.

But only from the Nazis. Kovaly devotes the rest of her memoir to the swift rise of communism in Czechoslovakia, backed by the Soviet Union, and the apparent end of any hope of freedom. Rudolf, the man she had long loved and whom she married after the war, joined the party and convinced her to do so as well. He was an idealist, believing that communism would deliver peace, prosperity, and human brotherhood. Here, Kovaly records a sentiment that today would likely be considered politically incorrect:

That I myself did not succumb to the lure of ideology was certainly not because I was smarter than Rudolf but because I was a woman, a being much closer to reality and the basic things of life than he was. … Rudolf could decide on the basis of statistics—mostly falsified, of course—that under communism people lived a better and happier life. I saw from close-up and with my own eyes that this was not true.

Eventually, even Rudolf had his eyes opened to evil. Capable, hard-working, and an official in the government, he and others were nonetheless arrested under false charges of treason, declared guilty, and hanged. His death removed all the social safety nets for his wife and young son, who moved from place to place while she sought work—to be unemployed was a crime—all the while under the shadow of the lies that the state had broadcast about her husband.

Heda Kovaly ends her chronicle by recounting some events she witnessed in the fall of 1968, when Soviet troops entered Czechoslovakia and brutally suppressed the growing reform movement. With her son living in England, and her second husband on a lecture tour in the United States, she managed to slip out of the occupied country by train and so made her escape.

The book ends with this paragraph:

The train did not stop long at the border and, when it began to move, I leaned out the window as far as I could, looking back. The last thing I saw was a Russian soldier, standing guard with a fixed bayonet.

It Can Happen Here … Or Anywhere

Kovaly wrote: “We had listened with only half an ear when our history teachers discussed torture or the persecution of innocent people. These things could only have happened a long time ago, in the dark ages. When it happened in our time and in a form far worse than we could imagine, it felt like the end of the world.”

When I used to teach world and European history to seminars of homeschooling students, they too were often appalled to learn of massacres during the Crusades or executions during the Reformation. Most seemed to think that human beings were incapable of such evil in our modern world, unaware, until I reminded them, that we had just ended the bloodiest century in the history of the human race. I wish now that I had known of “Under a Cruel Star” so that we might have read it together.

Americans have often said, “It could never happen here.” Yet Kovaly offers insights that could easily apply to the United States today. Here are just a few of them:

Of the communists, Kovaly notes: “It is not hard for a totalitarian regime to keep people ignorant. Once you relinquish your freedom for the sake of ‘understood necessity’ … you cede your claim to the truth … you have voluntarily condemned yourself to helplessness.” That should strike a chord in the wake of the COVID pandemic, with its heavy-handed lockdowns, its closures of schools and churches, and the lockstep obedience of most of our citizens.

The intrusion of communist ideology into the home and the family changed the way many people thought. “I knew nothing about politics and less about economics. But I began to understand that life had become politics and politics had become life,” Kovaly wrote. There’s an apt description of many Americans today, who rank politics over friendship or even family ties.

Twenty years after her husband’s execution, Kovaly learned of the fate of his remains. His ashes and those of 13 others were taken for disposal into the countryside. “A few miles out of Prague, the limousine began to skid on the icy road. The agents got out and scattered the ashes under its wheels.” In our own country, we have cheapened life as well, with euthanasia and abortion. Some have even used human remains—so far, with the consent of the dead—as compost.

Recounting life under communism, Kovaly stresses the ability of the regime to stifle even ordinary conversation, when an unguarded word might be reported to the authorities. She adds, “Party discipline demanded that we constantly analyze ourselves, our thoughts, our wishes, our inclinations.” Many in Western society today feel the chains of these same constraints, fearful of the cancel culture mob or, worse, trouble with the authorities should we say or write something unacceptable.

Courage Is the Keystone

During the 1968 Prague revolt, Kovaly passed a statue of Jan Hus, executed during the Protestant Reformation. At the base of the statue are the words “Truth Prevails.” She then asks: “Does it? Truth alone does not prevail. When it clashes with power, truth often loses. It prevails only when people are strong enough to defend it.”

In spite of its grim trials and horrors, “Under a Cruel Star” is an account of such heroism. When Kovaly demands justice for her husband from the men who helped send him to his death, she behaves with real courage. Some of the friends who assist her in her tribulations under these dictatorships act against their own personal interests, risking imprisonment or death for the sake of charity.

One last message for us from Heda Kovaly: Several times in “Under a Cruel Star,” she wishes for an “ordinary, quiet life,” but eventually she concludes: “You cannot build a happy private life in a corrupt society any more than you can build a house in a muddy ditch. You have to lay a foundation first.”

The foundation she believed in was composed of rights, liberties, and justice. If those are the building stones that we ourselves wish to preserve, we must find within us the strength, grace, and perseverance of Heda Kovaly.

A final note: Heda Kovaly came to the United States, retired as a librarian at the Harvard Law School Library, and returned to the Czech Republic before her death.