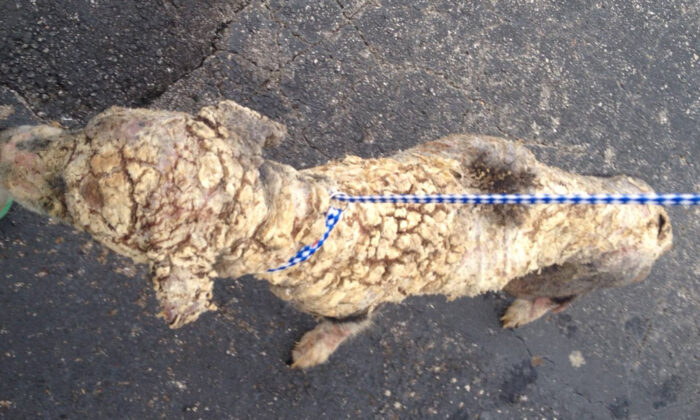 Horribly Mangy Stray Dog Was Covered in Scales, Until Rescuers’ Love Turns His Life Around

The sorry state of stray dog Augustus was enough to shock his rescuers the day he was picked up from the streets of Alabama in 2015. Several months and a lot of love and care later, however, Augustus was barely recognizable.

This is his story.

Augustus had lived a brutal life on the streets. His fur was all but completely missing, and his skin was covered in a thick, dry, painful crust. Augustus was neglected by the local community, who were either frightened or revolted by him. But one day, the sickly dog’s luck changed for the better.

Debbie Rappuhn, co-founder of non-profit Heart of Alabama Save Rescue Adopt (HASRA), saw a photo of Augustus and decided to act fast to save his life. The sorry-looking pup was found wandering the back roads of Lauderdale County in northwest Alabama; HASRA picked him up by luring the nervous dog into a crate with food.

According to the Daily Mail, Augustus’s rescuers described him as looking like a “prehistoric creature” owing to the crusty mange covering his entire body. The mange was so bad that the homeless dog’s skin more closely resembled scales.

Augustus was taken to an emergency veterinarian; this dog, he said, had the worst case of mange he had ever seen.

Besides the inch-thick crust engulfing Augustus’s head, neck, and most of his back, the poor dog was also emaciated and suffering from an ear infection. But despite his discomfort, Augustus was affectionate toward his rescuers.

Augustus received antibiotics, daily baths, and coconut oil treatments for his sore, scaly skin. Slowly, the rescued dog’s scales peeled away to reveal raw, pink skin; but staff couldn’t let him outside for respite just yet for fear that the sun would burn him.

HASRA staff had no clue what breed of dog Augustus was at first. However, before long, the dog’s fur started growing back in; every new tuft was one triumphant step closer to recovery.

“He’d look up at us with these eyes that just said, ‘Thank you,’” Debbie told Advance Local Alabama. “We knew at that time he wasn’t scared of us anymore. He was just so thankful and so grateful that someone had helped him.”

It turned out that under all those scabs, a beautiful, healthy, black-and-white border collie dog with luscious fur was hiding beneath. Offers to adopt Augustus started pouring in, and Debbie was careful in her selection. Nonetheless, the sweet dog’s first foray into an adoptive home ended all too soon.

On June 24, 2015, HASRA took to Facebook to share news of a trial adoption: “He will have three sisters and one brother, (humans, lol) and a mom and dad, if all works out,” Debbie posted.

Sadly, however, the children of the family developed allergic reactions to Augustus and returned the dog to the animal shelter.

On July 2, 2015, Augustus got his second chance at a forever home from a dog-loving Montgomery resident named Jordan Crist, who had another dog, named Layla, for Augustus to play with. “This is what our work is all about, right here,” Debbie shared on Facebook, calling Augustus’s second placement the “perfect home.”

Jordan told Advance Local Alabama that it took a few weeks for goofy Gus to relax but that after seeing him play with toys and with his sister, he started to seem “just happy.”

“Those little milestones you take for granted with dogs that haven’t necessarily been through what he’s been through,” Jordan reflected. “Just those little things.”

Augustus’s transformation may be up there with the greatest “comeback” dog-rescue stories of all time. Thanks to the huge-hearted animal lovers who saw past his scales, Gus now has a bright future with people who will love and take care of him for the rest of his days.