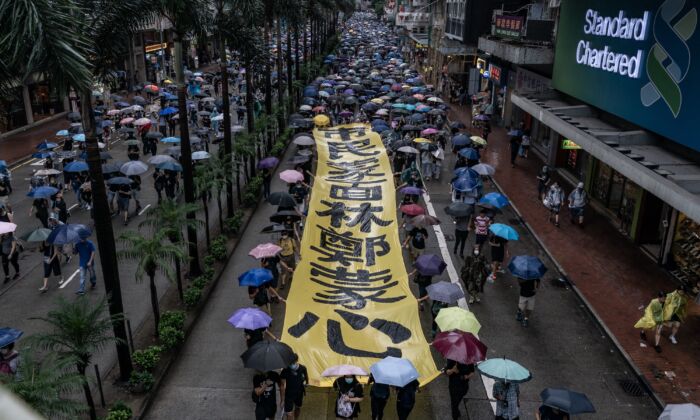 Pro-democracy protesters take part in a demonstration as they march on a street in Hong Kong, China on October 6, 2019. (Anthony Kwan/Getty Images)
HK Current Affairs

Hongkongers marched in heavy rain on Hong Kong Island and the Kowloon district on Oct. 6, defying a mask ban that the government enacted in an attempt to quell protests.

They marched despite not having applied for the demonstration with the police force. Riot police later fired tear gas to disperse protesters.

The unrest marked the 18th consecutive weekend in the city’s protests against Beijing’s growing encroachment on the city’s autonomy.

Hongkongers organized a rally and two marches on Oct. 6, which began at 2 p.m. local time. The rally at Victoria Park was themed around protecting the rights of journalists and supporting female journalist Veby Mega Indah from local Indonesian newspaper Suara, who was shot in the eye by a police projectile on Sept. 29.

Her lawyer Michael Vidler said that her doctor confirmed Indah’s right eye would have permanent blindness. Vidler also said Indah would soon file a lawsuit against Hong Kong police for their misconduct.

Locals also defied the anti-mask law in two marches, one on Hong Kong Island that went from the SOGO mall in Causeway Bay to Chater Garden in the Central district, and another in Kowloon, from Salisbury Road in Tsim Sha Tsui to Maple Street Playground in Sham Shui Po.

Hong Kong leader Carrie Lam announced on Oct. 4 that she would invoke the colonial-era Emergency Regulation Ordinance to enact the ban, without discussion or voting by Hong Kong’s legislature. to quell protests now in their 18th straight week.

The law went into effect on Oct. 5, making it illegal for anyone taking part in a public gathering of more than 50 people or a demonstration with more than 30 people, to wear a mask. The emergency ordinance, which gives the city’s leader broad powers, including making arrests and suspending communications, was last used more than 50 years ago.

On Sunday, Hong Kong’s high court rejected a plea from 24 pro-democracy camp lawmakers to issue an interim injunction against the anti-mask law.

The high court judge decided that another of the lawmakers’ request—to conduct a judicial review of the law’s constitutionality—will be decided at a hearing sometime in the second half of this month.

On Friday evening, a 14-year-old was shot in the leg by an off-duty police officer, marking the second wounding from a police shooting since mass protests began in June. He was later charged with rioting and assaulting a police officer.

During the marches, protesters wrote graffiti like “I would rather die for speaking up than live in silence” on the ground, and held placards with messages of defiance: “you can scare us, but you can’t stop us.”

Tse, an elderly Hongkonger who participated in the march in Hong Kong Island while wearing a mask, told The Epoch Times reporters: “Hongkongers only have one small request, which is to maintain the ‘one country, two systems,’” referring to the framework with which the Chinese regime promised to preserve Hong Kong’s freedoms after it reverted from British to Chinese rule in 1997.

“The Communist Party is controlling Hong Kong police to make a mess here,” Tse added, believing that the police are acting as a puppet for Beijing.

Riot police eventually arrived to disperse both marches, firing tear gas and water cannons. Cooperating with the police’s actions, the MTR suspended some services and shut down train stations near the demonstrations.

In Kowloon, riot police made dozens of arrests while protesters were fleeing the scene, grabbing them from behind and pinning them to the ground. In some cases, officers used pepper spray directly on protesters’ faces.

Police have not yet announced the total number of protesters arrested from Sunday’s protests.

While marching, some protesters vandalized restaurants, shops, and banks that were mainland Chinese or believed to be pro-Beijing, as well as the offices of pro-Beijing lawmakers.

A young man from mainland China witnessed some of the violence in the Wan Chai district, and told The Epoch Times about what he witnessed.

“What I saw is that Hongkongers targeted the mainland Chinese-operated businesses…They took nothing from the stores, and even tried to stop passerby from taking the products [that the businesses sold],” the young man said. He was visiting Hong Kong specially to witness the protests.

At about 4 p.m. local time, a taxi driver entered the parading crowd at Sham Shui Po. Suddenly, the car rushed toward the protesters, injuring three. One of them broke their foot, according to local media reports.

Some protesters dragged the taxi driver out of the car and started beating him. Medics later arrived to treat him.

At about 5 p.m., a reporter from public broadcaster RTHK was accidentally hit by a petrol bomb thrown by a protester, which burned his plastic raincoat and his ears. The reporter was sent to the hospital for treatment.

Hong Kong Hospital Authority, the statutory body managing all government hospitals and institutes, announced that as of 7 p.m., at least four protesters were sent to the hospital for treatment on Oct. 6, three of them in critical situation.

As night fell, protesters who passed the Kowloon Tong area and pointed laser pens at the Chinese PLA barrack there. Chinese troops have maintained a presence in the city since 1997.

Local media footage showed that several soldiers eventually came out on the roof of the barrack’s building. They wore helmets, and raised a yellow flag that is frequently used by Hong Kong police during demonstrations.

The warning flag reads: “You are breaking the law. You will soon be prosecuted.” Some soldiers also pointed what appeared to be Remington pump-action shotguns at protesters, according to local media. Soon, protesters left the area.

The PLA soldiers’ use of a police flag drew concerns from Hongkongers, who said on social media that the city was “one step closer to the deployment of the Chinese army.”