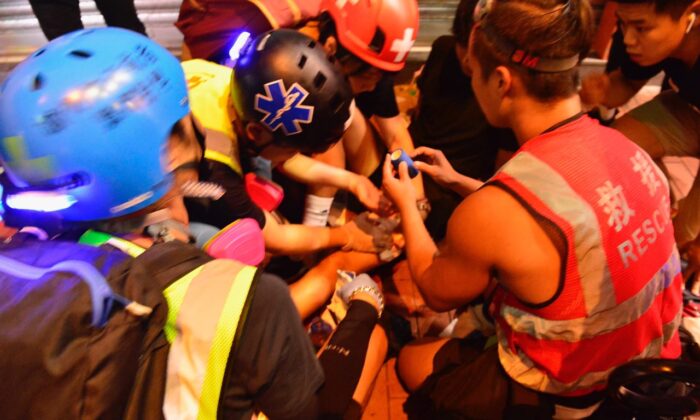 This article has been updated with the latest police statement regarding the incident.

A second Hong Kong protester has been shot during demonstrations in Yuen Long.

After the Hong Kong government on Oct. 4 evoked an emergency law to ban people from wearing masks—in an attempt to quell ongoing protests against Beijing’s encroachment over local affairs—public anger has boiled over, with many Hongkongers walking out in impromptu marches. Many wear masks to protect their identity, for fear of reprisal from the Hong Kong or Beijing authorities.

The shooting incident marks the second protester injured by live ammunition in nearly four months of protests since June.

Hundreds gathered in the Yuen Long district near the Yoho Mall on Friday evening. Some also blocked surrounding streets with makeshift barricades.

Around 9:15 p.m., protesters surrounded a white-shirted man, accusing him to be an undercover police officer. The cornered man then took out a gun and shot a protester in the thigh. After midnight, the Hong Kong police released a statement confirming that the officer was a plainclothes police, adding that he “fired one shot in self-defense” because he faced “serious threat to his life.”

The man had hit a protester while driving his personal vehicle, leading to the ensuing scuffles, local newspaper Apple Daily reported. Protesters also sprayed the words “plainclothes police” onto the car door.

Video footage, taken after he opened fire, showed angry protesters throwing petrol bombs at the man. The petrol bombs ignited a fire near the vehicle and caught him on the left waist side. The man then fled the scene, and dropped his revolver on the ground. He also had blood on his head.

A man wanted to attack protesters and they fight back. The man shot once. Protesters counterattack with fire and he throw away his gun.We can know he’s an off duty police because he shoot people. #AntiMaskLaw #HongKong #HongKongProstests #HongKongPolice #HongKongPoliceTerrorism pic.twitter.com/wkkolvePHz

Nearby protesters tried to confront him and pick up the gun, but he quickly retrieved the gun back, the video shows. He then made a call on his cell phone, saying: “I’ve been beaten, come help me!”A government press release confirmed that a gunshot had been fired, and that the injured protester was sent to the Pok Oi Hospital in Au Tau area. Local media RTHK reported that the protester was 14 years old.

In another press release, the government said that some protesters “attacked a police officer by throwing petrol bombs twice and attempted to take away his pistol dropped on the ground.”