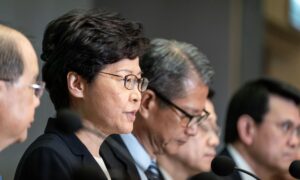 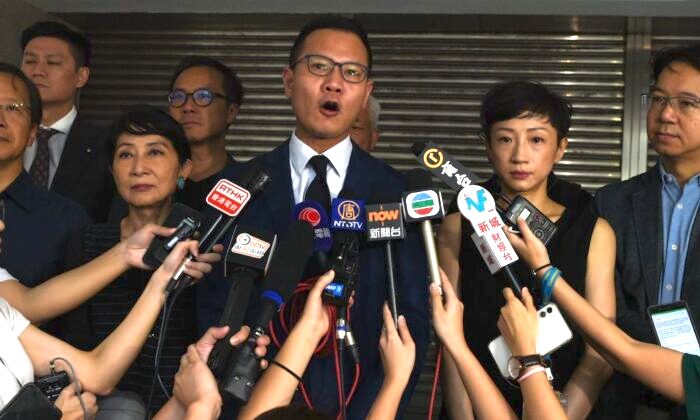 Lawmaker Dennis Kwok speaks to journalists outside the High Court as he and some 23 other lawmakers seek an emergency injunction in a bid to overturn a face mask ban in Hong Kong on Oct. 6, 2019. (Mohd Rasfan/AFP via Getty Images)
HK Current Affairs

Hong Kong’s high court has rejected a plea from 24 pro-democracy camp lawmakers’ to suspend a controversial law that bans face masks at protests.

The anti-mask law went into effect at midnight on Oct. 4 after Hong Kong leader Carrie Lam invoked her emergency powers to implement the mask ban in an attempt to quell protests now in their 17th week.

The anti-mask law, formally known as the Prohibition on Face Covering Regulation, was implemented under the Emergency Regulation Ordinance without discussion or vote by Hong Kong’s Legislative Council (LegCo).

During a press conference on Oct. 4, pro-democracy lawmaker Claudia Mo slammed the Lam’s decision to evoke the emergency ordinance, calling it a “weapon of mass destruction” that could lead to more draconian regulations.

By invoking the ordinance, Lam now has sweeping powers to make any regulations, including stopping communications and making arrests, after she deemed that Hong Kong was in a state of “public danger.”

Under the law, it is now illegal for people to wear a face mask while taking part in a public gathering of more than 50 people or a demonstration with more than 30 people. Lam said the new law will be tabled at LegCo on Oct. 16 for lawmakers to make amendments.

High Court Judge Godfrey Lam denied the lawmakers’ request to issue an interim injunction against the anti-mask law on Oct. 6. According to local media RTHK, Godfrey Lam decided that another lawmakers’ request—a judicial review of the constitutionality of the law—will be decided at a hearing sometime in the second half of this month.

Godfrey Lam’s decision was announced after a hearing that began at 10 a.m. local time. Prior to the hearing, Civic Party lawmaker Dennis Kwok told the press that the legal case against the anti-mask law was “one of the most important constitutional cases in the history of Hong Kong.”

Kwok explained that the case would show whether Hong Kong is ruled by an authoritarian government or that the city remains governed by the rule of law with the principle of separation of power.

This is the second time that the issue of anti-mask law has been taken to the court. Late in the evening on Oct. 4, local activist and former lawmaker Leung Kwok-hung, and former student leader Lester Shum filed an application at court, arguing that the ban would constitute “disproportionate interference” to the basic rights of holding a peaceful assembly and freedom of expression.

The court, also presided by Godfrey Lam, struck down Leung and Shum’s request for an emergency injunction to suspend the anti-mask law.

On Oct. 4, Hong Kong Journalists Association issued a statement warning that reporters could be arrested, detained, and prosecuted for facial masks, despite “claims by the government that journalists are exempt from the regulation.”

In a document published on the security bureau’s website, the government states that people engaged in a profession or employment requiring the wearing of a mask, such as the medical profession, would be exempt from the law. People with health reasons and people wearing a facial covering for religious reasons would also be exempt.

Many protesters have continued to take to the streets wearing a mask despite the ban. On Oct. 5, thousands of protesters marched from Causeway Bay to Charter Garden, while chanting slogans such as “I Have Right to Wear a Mask.”

In the afternoon on Oct. 6, thousands of protesters filled the streets in two separate marches—one from Causeway Bay to Central and another from Salisbury Garden in Tsim Sha Tsui to Kowloon.