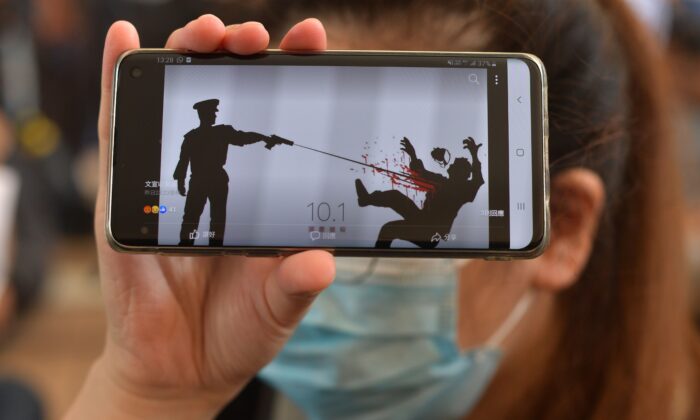 A woman holds up her phone showing an image of the police shooting of the young protester outside the entrance to the West Kowloon Court in Hong Kong on Oct. 2, 2019. (Nicolas Asfouri/AFP via Getty Images)
US-China Relations

The police shooting and wounding of an 18-year-old protester on Oct.1 has drawn criticism from around the world.

“This is a new low,” Sen. Bob Menendez (D-N.J.) wrote in an Oct. 1 tweet responding to the use of live ammunition during clashes between police and protesters.

“The United States must not look the other way while the democratic aspirations of the people of Hong Kong are viciously trampled.”

Oct. 1 marked the 70th anniversary of the Chinese Communist Party’s takeover of the country, which Hong Kong protesters declared as a “day of mourning.”

In opposition to what they see as the regime’s creeping encroachment into the city’s autonomy, over 100,000 protesters took to the streets on Oct. 1. The day later descended into chaos with cat-and-mouse chases and clashes across the city, with police using tear gas, rubber bullets, and water cannon to disperse protesters.

That afternoon, an officer shot a teen protester in the chest at close range during a scuffle in Tsuen Wan. The 18-year-old, later identified as Tsang Chi-kin, collapsed to the ground.

I call on the Senate to expeditiously take it up and for Congress to send it to the president for his signature. The people of Hong Kong are engaged in an existential battle over what the future of Hong Kong will look like. They should know America stands with them.

Tsang was shot in his left lung, three centimeters (just over 1 inch) from his heart, according to local media. He was stable as of Oct. 2 after undergoing emergency surgery, local media said.

Hong Kong’s police chief later defended the officer who shot Tsang, saying the officer acted in self-defense and that his use of force was “legal and reasonable.”

“This is what 70 years of Communist rule looks like in China—freedom is trampled and dissent is silenced,” Kevin McCarthy (R-Calif.) said in an Oct. 1 tweet, referring to the shooting.

As pro-democracy Hong Kongers demonstrate peacefully in the streets, Chinese police shot an 18-year-old protestor in the chest. This is what 70 years of Communist rule looks like in China—freedom is trampled and dissent is silenced.

“It is darkly fitting that on the 70th anniversary of the PRC, its agents would be reduced to using force against protesters in Hong Kong who seek to preserve basic personal freedoms,” McConnell said in an Oct. 1 statement.

He called on the U.S. leaders to “pause to recognize the many millions of lives lost under the Chinese communist rule.”

“If this is how a great power treats its own citizens, just think how it will treat foreign countries who fall under China’s growing economic and military influence,” he said.

Sen. Ted Cruz (R-Texas) similarly called on U.S. administration to “push back” against Beijing’s “assault on the people of Hong Kong,” and called the shooting “unacceptable.”

“The people of Hong Kong are engaged in an existential battle over what the future of Hong Kong will look like. They should know America stands with them,” Cruz said in an Oct. 1 statement.

British and European Union officials both spoke out against the police shooting.

“Whilst there is no excuse for violence, the use of live ammunition is disproportionate, and only risks inflaming the situation,” British foriegn secretary Dominic Raad said in an Oct. 1 statement.

Raad also called on the Hong Kong government to address the legitimate concerns of the protesters.

“The right to assembly and the right to protest peacefully must continue to be upheld in line with the (Hong Kong) basic law and international commitments,” she told reporters during a briefing on Oct. 1, according to Hong Kong Free Press.

Hong Kong Watch, a U.K.-based human rights non profit, said the incident was “part of a wider cycle of police brutality,” citing a recent Amnesty International report that showed “an alarming pattern” of violence used by Hong Kong police, including beating protesters during arrest and the alleged torture of detained demonstrators.

Man-Kei Tam, the director of Amnesty International Hong Kong, also appealed to Hong Kong officials to “urgently review their approach in policing the protests” and “launch a prompt and effective investigation” into the incident.

“Police should only use lethal force in response to an imminent threat of death or serious injury and only as a last resort,” Tam said in an Oct. 1 statement.

“The shooting exposes the true face of a totalitarian regime, and is just the latest tragic emblem of 70 years of human rights disasters in China under the rule of the Communist Party of China,” Sharon Hom from advocacy group Human Rights in China said in a statement.