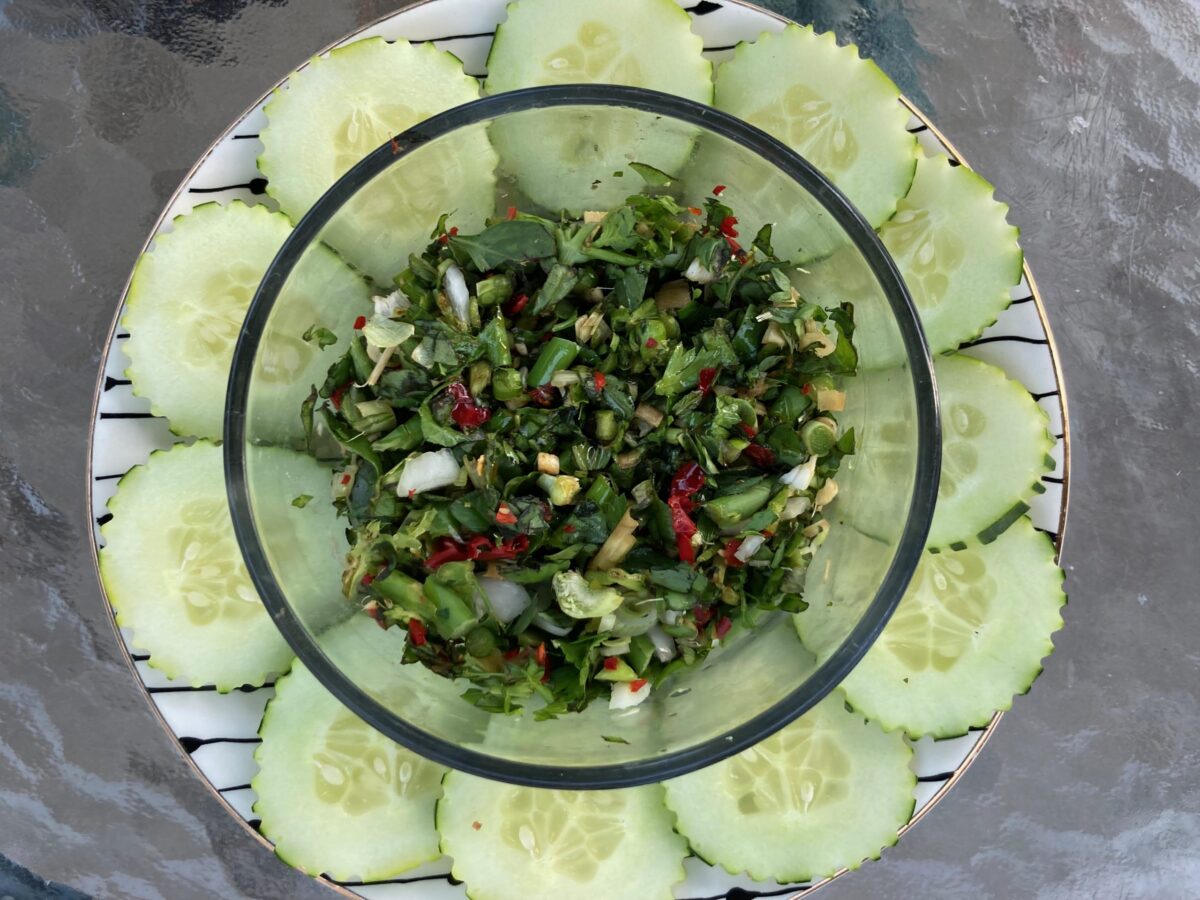 Bunches of fresh herbs, aromatics, chile, and umami-packed fish sauce combine into a punchy condiment to scoop over everything. (Ari LeVaux)
Food

The Best Thing to Do With Fresh Herbs, Hot Peppers: Make This Put-It-on-Anything Condiment

Some of the best chefs I know are vegetable farmers, preparing their own produce in their home kitchens during the heat of summer. With a hungry crew grumbling in the fields, time is of the essence, but the rush won’t diminish the farm cook’s determination to serve fresh, high-quality produce at its absolute best.

Cooking for a large group, preferably with as much free food as possible from the farm, means a deluge of vegetables. It means lots of chopping. Nonetheless, most farm recipes come together quickly. There’s enough to squash all appetites and leave the eaters nourished as well as satisfied. While preparing such meals, a farm cook can go head-to-head with any line cook. And the menu planning, recipe development, leftovers utilization, and inventory awareness required of a farm cook puts them on the level of an executive chef.

Cua Grogan is one such chef. A Montana farmer of Hmong descent, her ancestors came from the rugged hill country around Vietnam, China, Myanmar, Thailand, and Laos. Her parents fought alongside the Americans in the Vietnam War, where Hmong fighters specialized in rescuing downed U.S. pilots from the steep jungle. When the war ended, the U.S. government resettled the Hmong fighters and their families. Many chose to live in Montana, where the farming is good, the people are nice, and the mountains remind them of home.

Most vegetable lovers have a special appreciation for herbs, and Grogan is no exception. This time of year, she prepares “pepper,” a condiment that combines garlic, onion, and herbs with Asian ingredients such as fish sauce, Thai chile peppers, and lemongrass, which Grogan grows in a greenhouse and sells at market. Any herbs can be used in pepper, she said, including mint, basil, cilantro, and parsley. As the season progresses, the lineup of ingredients in pepper changes. In early summer, she uses garlic scapes. In late summer, she uses fresh chiles rather than dried.

“We scoop pepper onto whatever we are eating,” Grogan told me. “Even plain rice.”

Then, she leaned in conspiratorially. “When I’m eating alone, I just mix pepper with cucumber,” she said. Sometimes, instead of mixing it in, she slices the cucumber and scoops it up like chips and salsa.

I took a load of the requisite ingredients back to the lab, where I was able to confirm that pepper goes marvelously with whatever you scoop it on. It’s not very salty, but it’s full of strong flavors that interact with whatever you eat it with, making anything it touches more interesting. And, as promised, it makes the most humble bowl of rice taste like an exotic meal.

Then, I tried adding cucumbers, per Grogan’s suggestion. It was a spectacular combination, and I can understand why somebody would want to hide away and eat it privately. The crisp, watery cucumber almost completes the pepper experience. But I felt something was missing, to my taste. I wanted vinegar with my herbs and cucumbers. I wanted peppered pickles.

So I added white wine vinegar. After a few minutes, they were amazing. The next day, they were even better. Crisp, aromatic, and refreshing, the whole family fell in love with these peppered pickles.

And moving forward, I’ll be prepping pepper whenever I have fresh herbs. Adding it to your meal is a glorious way to eat.

Here is Grogan’s recipe for pepper. Scoop it onto whatever you’re eating, and enjoy the aromatic whirlwind of flavor.

Serves a lot of people, unless one of them is Grogan, who just might eat it all.

Mince all the ingredients except the fish sauce. Stick to one ingredient at a time and keep chopping until finely cut. The chopping can be an intimidating task, but it’s worth it.

Combine the ingredients in a mixing bowl. Add the fish sauce. Taste. Add more if necessary. If you want it saltier but have a limited tolerance for fish sauce, then use salt.

If you want to make peppered pickles, you don’t need to mince the herbs as finely. A coarse chopping is good. Then add cucumbers, also chopped coarsely, and enough white wine vinegar to cover everything. Alternatively, substitute yogurt for the vinegar, for a tangy, creamy, cooling snack with pizzazz aplenty.