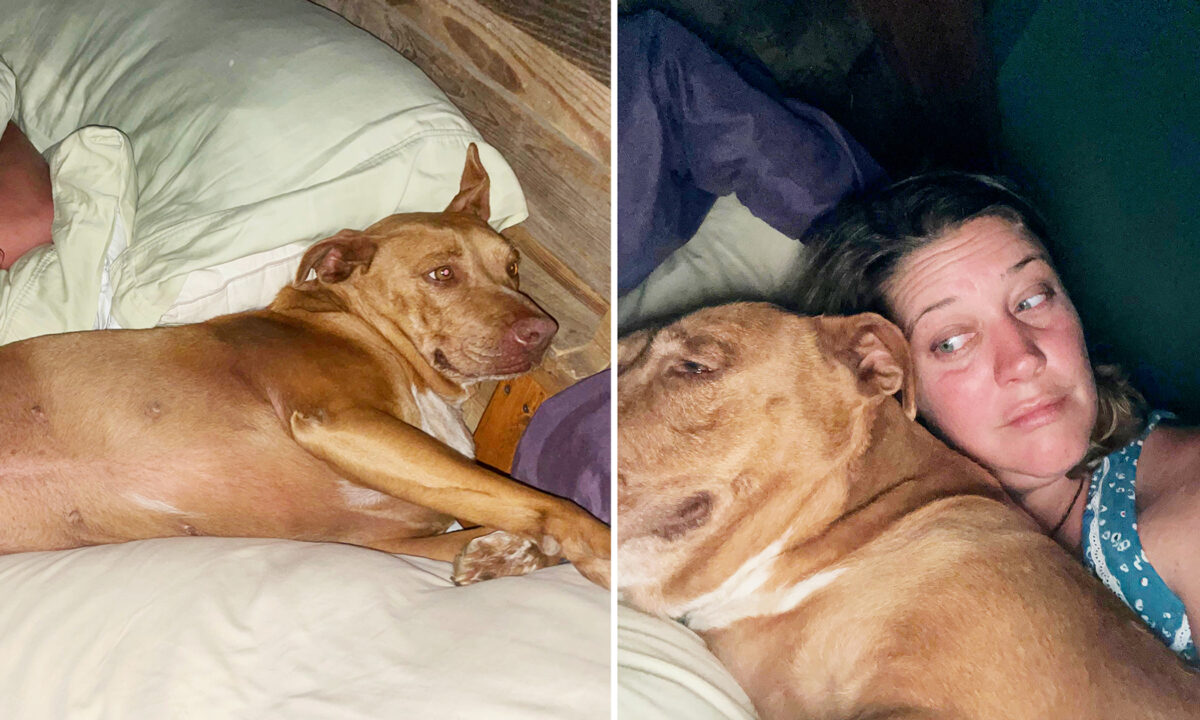 A Tennessee couple who woke in the middle of the night to find a strange dog in their bed during a storm have shared the hilarious anecdote on social media. Now, since reuniting the sweet pup with her rightful owners, they have secured her as a playmate for their own three dogs.

Julie and Jimmy Johnson, who are whitewater-rafting guides on the Ocoee River in Southeast Tennessee, are no strangers to adventure. But when a pit bull-Labrador mix, Nala, from their neighborhood snuck into their bed on May 1, they didn’t know what to make of it.

“I believe that when my husband let our dogs out to potty that night, before we went to bed, we didn’t shut the door all the way nor latch the door completely,” Julie, 42, told The Epoch Times. “It seems that a storm rolled in around 4 a.m. and we woke up to Nala in the bed with us.”

Sharing more about the encounter, Julie, who was sleeping facing the wall that was in the opposite direction to Nala, was asked by her husband about whose dog was in their bed.

Julie rolled over and locked eyes with her husband, equally shocked and confused. Wary that Nala may not be friendly, they both lay in silence for 10 to 15 seconds.

“A few moments later, my husband went to pull the blankets up, and Nala just snuggled in tighter,” said Julie. “She was very peaceful, warm and cozy, and had no desire to move!”

They surmised that Nala had run away from home, scared by the storm, and found refuge at their house after a “conversation” with their own normally very vocal dogs, Jupiter, Hollis, and Zeplin, on the porch.

After the initial shock of finding Nala in their bed, Julie noticed that she was in great condition, and felt reassured.

“She was clean, she was well-mannered, she did not have fleas or ticks, she was not skinny, she was not hungry,” said Julie. “She was someone’s baby. That’s when I took the quick pictures of us in bed with Nala and posted them to my Facebook page, shared them in a few ‘lost and found groups’ … and wow, it took off like wildfire.”

Around two hours later, Julie got a message from a woman, Felecia Johnson, claiming that Nala was her dog. Julie immediately responded by asking for proof of ownership and Felecia sent a plethora of family photos before setting off to pick up her runaway pup.

Meanwhile, Jimmy remained in bed with Nala to keep her calm. Upon Felecia’s arrival, she called for her dog from the Johnsons’ porch, but to no avail.

“This poor woman had to come in the house, into my bedroom where my husband was still in bed,” said Julie. “Nala was very happy to see her mom … but she did not want to get up. Her mom is tiny and Nala probably weighs more than her, but her mom picked her up, held her like a baby, and carried her out. It was absolutely hilarious and precious!”

“So much of what’s going on in both social media and printed press is just negative or heart-wrenching and sad, and I think people are desperate for something positive,” she reasoned.

Cris Hawkins, who is Nala’s other owner, later posted a message of gratitude on Facebook, writing, “Our overly friendly pup, Nala, has hit an all-time record for ignoring personal space … thankfully, the couple thought it was hilarious.”

Since Nala’s escapade, she and her owners Cris and Felecia, have become friends with Julie, Jimmy, and their three dogs. A week later, they all reunited at the Johnsons’ house for a playdate.

“I believe we’ve sparked a friendship and we just get along great,” Julie told The Epoch Times. “At the puppy playdate, they all loved each other; they played in the yard with dog toys and sticks, rolled around on the grass, and we just had a wonderful afternoon.”

Reflecting back on this amazing encounter, Julie said: “You never know what someone or something needs, and if you don’t open up the possibility to help somebody, then you’re not going to be able to help them.”

She added: “I would not want to be stuck outside in the middle of the night and a thunderstorm; I’m thankful that Nala ended up in our home.”