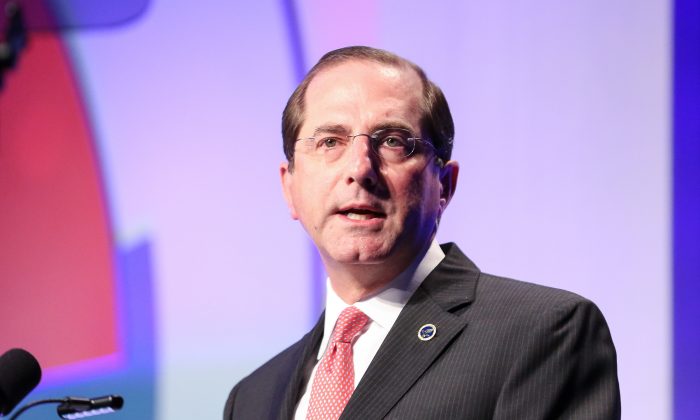 Secretary of Health and Human Services Alex Azar speaks at a caregiver for veterans conference "Hidden Heroes Among Us" in Washington on Nov. 26, 2018. (Holly Kellum/NTD)
Trump Administration

WASHINGTON—The U.S. Department of Health and Human Services (HHS) released on Nov. 28 its strategy for tackling burdensome health-record paperwork that has been made worse by the advent of electronic health records, known in the industry as EHR.

Information trapped inside noncompatible software and rapidly changing federal and state regulations has likely contributed to a consolidation of health care providers, which limits the number of physicians in private practices.

According to a 2016 survey by the Physicians for National Health Program (PNHP), physicians reported spending more time on paperwork than they did seeing patients by a ratio of two to one.

Overlapping and conflicting regulations between state and federal agencies have created most of the burden for physicians, said Matthew Katz, the executive vice president and CEO of the Connecticut State Medical Society and a board member of the Physicians Advocacy Institute (PAI).

HHS says it has heeded the industry’s calls and recognizes that its regulations are a big part of the problem.

“As health care providers across the health care continuum seek to improve the ways they deliver care by incorporating beneficial new information technologies, these sources of burden can impede further innovation, ultimately limiting potential gains in improved quality of care for patients and patient safety,” HHS Secretary Alex Azar said in a statement in the report. “We believe there are many steps HHS can take to reduce burden.”

HHS’s new strategy broadly has three goals: to reduce the effort and time required to record health information in EHRs, improve the intuitiveness of EHRs, and reduce the time it takes to meet regulatory reporting requirements.

It should be clear to anyone paying attention that we are focusing our efforts to reduce regulatory burden & bolster competition in order to support independent practices & increase choices for patients.

Katz says the problem is not just about what clinicians have to record but how fast government regulations change.

“We are seeing such significant regulatory changes from year-to-year that you need consultants and you need volumes of books simply to keep up with those regulations,” said Katz. “And then once you’ve understood them, they change.”

The Centers for Medicare and Medicaid Services (CMS) alone hands down almost 11,000 regulations a year, a number even CMS recognizes is a problem.

CMS Administrator Seema Verma said that because of CMS’s size, its actions affect the entire health care market, and that regulatory burden it imposes is a “major driver” of health care costs. She has also heard from the industry that paperwork is a major driver of physician burnout, and she believes it is accelerating consolidation in the health care system.

In a study published in March, PAI found that between 2015 and 2016, the number of physicians employed by hospitals grew by 11 percent, a rate that is sharply higher than previous years. Between 2012 and 2016, the study found just a 17 percent increase.

A survey by The Physicians Foundation for 2015–2016 found the number of physicians employed by a group or hospital jumped 14. 3 percent.

The thicket of regulations that @CMSGov has rolled out over the years has also accelerated the consolidation we are seeing in our #healthcare system.

“I would agree that paperwork is contributing to consolidation in the health care industry,” said Pamela Wible, a privately practicing physician in Oregon who helps other physicians set up private practices. She added that the administrative burden is “unbearable.”

HHS issued the strategy as a requirement of the 21st Century Cures Act, which requires that the agency ensure that electronic health information can be securely shared with other health information technology “without special effort on the part of the user.”

But it’s also part of a larger deregulation push by President Donald Trump, who campaigned on deregulating the federal government. He has instructed all the federal agencies to cut regulations by 50 percent. For every new regulation imposed, two have to be cut.

HHS Secretary Alex Azar says the department has cut five regulations for every one it has implemented, which the Office of Managment and Budget estimates has saved $8.2 billion in regulatory costs.

The virtue of deregulation, according to proponents, is that it can reduce burdens on business and foster competition that will force prices down and choices up.

Some of what the Trump administration has done under the umbrella of “deregulation” is aimed at increasing competition, such as streamlining the drug approval process at the FDA to put more generics on the market.

Since then, short-term, limited duration health plans have been expanded from three months to three years; association health plans that allow small businesses and organizations to jointly provide coverage for employees have been established; as have health reimbursement accounts, to which employers make contributions to help employees pay for certain medical expenses not covered by their health plans.

“In the health care area, [the Trump administration has] publicly committed to an agenda of improving the system, increasing choice and competition, removing regulatory obstacles when they can,” said Ed Haislmaier, a senior fellow of health care policy at the Heritage Foundation, a conservative think tank. “They seem to be executing against that objective.”

He points out that the administration has been limited by what it can do without the help of Congress. Trump’s effort to repeal Obamacare, for example, died in the Senate last year when three Republicans voted against it.

At the request of Trump, CMS has instituted an initiative called Patients over Paperwork, which seeks to eliminate duplicate, outdated, or otherwise unnecessary regulations.

Between 2018 and 2021, CMS estimates the initiative will eliminate more than 53 million hours of paperwork burden for providers.