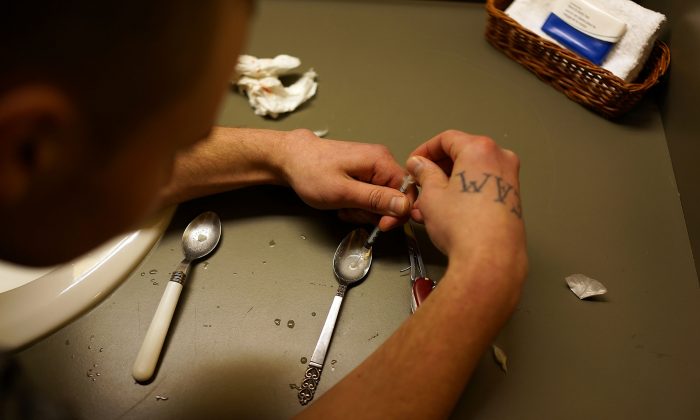 Compared to prescription painkillers, heroin is cheap, easy to get
By Washington University in St. Louis

A nationwide survey indicates that heroin users are attracted to the drug not only for the “high” but because it is less expensive and easier to get than prescription painkillers.

Researchers at Washington University School of Medicine in St. Louis published the survey’s results May 28 in the journal JAMA Psychiatry.

“In the past, heroin was a drug that introduced people to narcotics,” said principal investigator Theodore J. Cicero, Ph.D. “But what we’re seeing now is that most people using heroin begin with prescription painkillers such as OxyContin, Percocet or Vicodin, and only switch to heroin when their prescription drug habits get too expensive.”

Cicero and his colleagues analyzed data gathered from more than 150 drug treatment centers across the United States. More than 9,000 patients dependent on narcotic painkillers, or opioids, completed the surveys from 2010 to 2013. Of those, almost 2,800 reported heroin as their primary drug of abuse.

The researchers noted three key factors in the decision to use heroin: accessibility, including lower cost; enjoyment of the high; and the ease with which the drug could be snorted or injected. To get even more detail about those who use heroin, the researchers zeroed in on 54 patients who participated in unstructured interviews about drug use.

“The price on the street for prescription painkillers, like OxyContin, got very expensive,” Cicero said. “It has sold for up to a dollar per milligram, so an 80 milligram tablet would cost $80. Meanwhile, they can get heroin for $10.”
In 2010, the often-abused prescription painkiller OxyContin was reformulated to make the pills more difficult to crush or dissolve.

In a 2012 letter to The New England Journal of Medicine, Cicero noted that the reformulation had made it more difficult for users to snort or inject OxyContin, but that the change had led some users to switch to other drugs, including heroin.

“If you make abuse-deterrent formulations of these drugs and make it harder to get high, these people aren’t just going to stop using drugs,” said Cicero, a professor of neuropharmacology in psychiatry. “As we made it more difficult to use one drug, people simply migrated to another. Policymakers weren’t ready for that, and we certainly didn’t anticipate a shift to heroin.”

Today’s heroin users are older—23 on average—when they first try the drug. Most got high with prescription drugs acquired illegally before switching to heroin. They tend to live in suburban or rural areas rather than the inner city, and more than 90 percent of the study subjects who began using heroin in the past decade are white.

Previous research had reported that in the 1960s and 1970s, more than 80 percent of heroin users were young male minorities who lived in inner cities and began using the drug at about age 16.

“Our earlier studies showed that people taking prescription painkillers thought of themselves as different from those who used heroin,” Cicero said. “We heard over and over again, ‘At least I’m not taking heroin.’ Obviously, that’s changed.”

Cicero said it’s surprising that a drug like heroin is becoming more acceptable in suburban and rural settings. But he believes that more studies of people in treatment programs may shine light on the problem.

“The overdose deaths and hospitalizations are symptoms of a problem that we really need to deal with,” he said. “You can’t effectively treat people or prevent addiction unless you know why they are taking drugs, and we don’t really have a handle on that yet. Unfortunately, the problem with heroin is it’s the most powerful opiate ever created, and even if people think they are being careful, it can kill.”

The data was collected as part of the SKIP program, a component of the RADARS System, funded through an unrestricted research grant sponsored by the Denver Health and Hospital Authority, which collects subscription fees from 14 pharmaceutical firms.