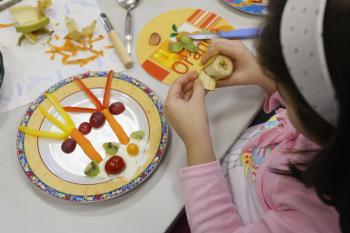 Children make an island scene on their plates out of fruits and vegetables. (Sean Gallup/Getty Images)
Fitness & Nutrition

Getting Healthy Foods into Fussy Kids

By Sheridan Harvey
biggersmaller
Print
SYDNEY—It’s a common struggle for thousands of Australian parents most days of the week–how to get their kids to eat healthy food?

According to a recent Australian study, 82 per cent of mums with children aged one to seven, described their children’s eating habits as “fussy”.

The 2008 study, a Kids and Nutrition Report, supported by Meat and Livestock Australia, also found that 80 per cent of the mothers were unsure if their child’s nutritional needs were being met.

Set an Example and Enjoy Good Food Together

Healthy habits start with good role models, as kids watch everything their parents and carers do. If children never see their family snacking on a variety of fruit, vegetables or wholegrain bread, then it should come as no surprise if they turn it down.

Another study, published in the Journal of American Dietetic Association in 2003 found that kids who were unwilling to try new foods often have mothers who are also reluctant to try new foods.

Be Creative With Nature’s Food

Kids will be motivated to eat good food if you make it fun and enjoyable. Try making up funny names for their meals and create faces on their plates with foods like carrots, dip, celery and tomato.

Reward kids with healthy food (but don’t tell them that it’s good for them—they won’t care!). Encourage them to try at least one bite of their veggies or other new food. It’s important to give kids what they need, not always what they want. There’s going to be times when no matter what you try, there’s no way the little ones will eat what is offered. Don’t make a fuss, just take the food away and re-offer it later when they’re hungry. Experts at the Children’s Hospital at Westmead say “don’t offer them an alternative food at that meal, wait till the next one”.

Australian research shows that many kids may need to be offered a new food up to 10 times before they’ll accept it. If a food is refused, it doesn’t always mean the child doesn’t like it, but that they just don’t trust it yet!

The key is to persevere, stay calm and positive. Keep a good eye on what your child eats throughout the day, as they may end up eating most of their food as snacks rather than at meal times. Allow them to build up an appetite and encourage them to drink more water and only one good snack between meals.

Sneaking the Veggies In

Pureeing food and hiding it inside sauces and meatballs is only a temporary fix. While you may get away with putting pureed “green stuff”, into the mix, or “mashed chickpeas in mash” (as a boost to their nutrition), the question is will they learn to choose these foods as they get older?

It’s best to introduce a wide variety of healthy food as early on as possible. It may be harder for them to adapt to different types of food the older they get. So “sell it” to them, like anything else, think about what makes them tick.

'But I must have sweets'

It’s a complete fallacy that kids need junk food. Sugar in its many forms can be highly addictive, not to mention bad for the teeth. Junk food and soft drinks are always colourful and marketed as fun to eat, so much so that most adults are tempted just as much as the kids.

The solution? Include a little protein at every meal to control their urge for sugar.

Parents decide what is eaten and when, while the kids actually control how much they eat. With a little encouragement and minimal distraction at mealtimes, they may eat a little more. Praise them for any little bit of goodness they get inside.

Always have fresh food available in the fridge and pantry at child height. Getting organised with healthy home-made food before going out will save a trip to McDonalds if the kids get hungry. Remember milkshakes, juice or soft drinks are not a necessity, but water is.

Perhaps limit sugary drinks and foods to a set time or day each week and avoid keeping junk food in the house.

It is well known that kids share their food at school, but if they learn to exercise good judgment at home, they’ll be less tempted by their peers. As they get older, involve the kids in the shopping and food preparation. This usually increases their interest in healthy eating.

Finally, good eating habits need to involve the whole family. Sit down to eat healthy meals together, bond and socialise. With loving relationships, children come to understand that what their parents say is in their best interest.

Sheridan Harvey is a nutritionist in Sydney.