Why Are Girls Reaching Puberty Earlier? 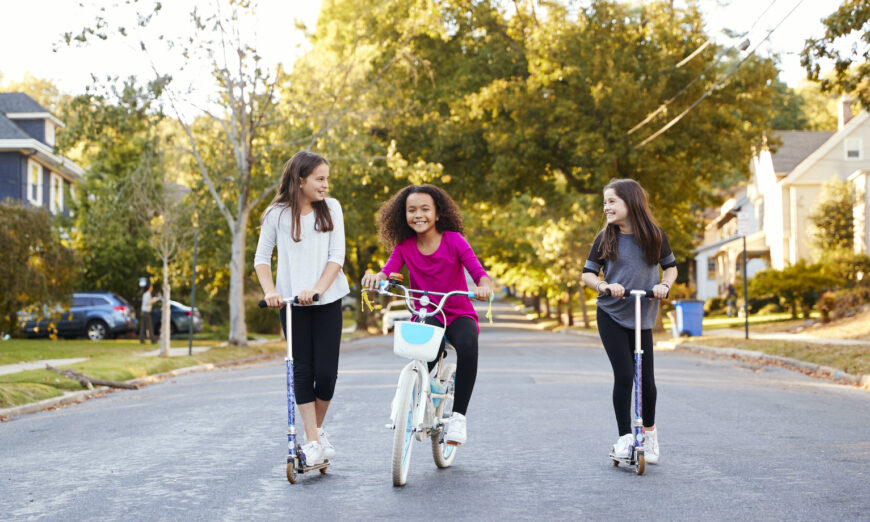 Young girls are hitting puberty at younger and younger ages. This does more than create health risks, it shortens their childhood and brings new stress to their lives.(Monkey Business Images/Shutterstock)

By 2010, the average girl reached puberty at the age of 10.5. Not only is the drop in puberty age seen across race/ethnicity groups in the United States, but according to a study in the Journal of Adolescent Health, the same trend toward early puberty has also been reported in England, Israel, China, India, Korea, Ghana, Mexico, and Thailand.

There are many reasons why early onset puberty, also called precocious puberty, matters. Early puberty puts girls at increased risk of obesity, diabetes, heart disease and other cardiovascular diseases, low bone mineral density, gynecological/obstetric, gastrointestinal, musculoskeletal, neuro-cognitive, psychiatric and respiratory disorders, and cancer, according to medical papers. Children with precocious puberty “often stop growing earlier than usual” which can “cause them to be shorter than average as adults,” adds the Mayo clinic. Other scientific publications agree.

What Are the Causes of Early Puberty?

Most, if not all, medical professionals agree that the age of menarche is lowering but agreement ends there. There are many theories about the dramatic appearance of early puberty among so many girls, and it’s likely that many of them have a basis in fact and that more than one theory is accurate.

Research published in 2018 in the International Journal of Endocrinology that focused on a cohort of Chinese girls identified clear links between early puberty and diet.

An “unhealthy diet pattern, heavy in desserts and snacks, soft drinks, and fried food, was found to be significantly positively associated with precocious puberty in both boys and girls,” wrote the authors.

“This diet was implicated in the timing of puberty, probably in any of the three ways: high fat intake, high sugar, and obesity due to high-calorie consumption. Consumption of junk food, such as fried foods, had been convincingly linked to obesity and rapid weight gain, a potential predictor of earlier age at menarche and other markers of puberty.”

Certainly, the so-called Western diet has infiltrated countries that once observed local and traditional cuisines.

According to Dr. Robert Lustig, a professor of clinical pediatrics at the University of California–San Francisco’s Benioff Children’s Hospital, “Fatter girls have higher levels of the hormone leptin, which can lead to early puberty, which leads to higher estrogen levels, which leads to greater insulin resistance, causing girls to have yet more fat tissue, more leptin and more estrogen, the cycle feeding on itself, until their bodies physically mature.”

Endocrine disruptors are chemicals that mimic and disrupt our hormone functioning and seem to lurk everywhere: in our food packaging, furniture, cleaning products, building materials, drinking water, gardens, cosmetics, and more. How badly have these unwanted chemicals invaded our world? Bisphenol A, a major endocrine disruptor often called BPA, was found in 90 percent of newborn infants tested by the Environmental Working Group along with more than 230 other chemicals!

Sadly, endocrine disruptors aren’t the only likely environmental culprits when it comes to tracing the roots of early puberty. Research published in the International Journal of Environmental Research and Public Health also associates metals such as manganese and lead “with the deregulation of the neuroendocrine system, which could potentially favor the appearance of precocious puberty in environmentally exposed children.”

Anxiety and Stress Within the Family

Research published in the journal Emergency Medicine International finds that the role of anxiety in the family system can contribute to early puberty. Girls with early puberty came from poorer households that were characterized by divorces and remarriages, according to the research. Girls whose parents divorced when they were between 3 and 8 years old were at greater risk. Father absenteeism is increasingly seen as a factor in girls who develop early puberty, say scientific papers.

“The absence of a biologically-related father has been shown to accelerate reproductive development,” write authors in the Journal of Adolescent Health. Two decades ago, researchers posited that “when girls encountered familial conditions that were unfavorable for survival (e.g., insecure and unsupportive family relationships), it was adaptive to become reproductively mature earlier. Since then, numerous empirical studies have confirmed that father absence predicts earlier maturation. Girls in father-absent homes are about twice as likely to experience menarche prior to age 12.”

With its stress, forced isolation, the dominance of electronic communication, and negative effects on sleep and diet, the COVID-19 pandemic increased the occurrence of early puberty.

According to research in the Italian Journal of Pediatrics, “Due to lengthy periods of school closure, restrictions on activities, and changes in diet and sleep patterns, an increase in the frequency of obesity in children is to be expected,” wrote the authors.

“During the lock-down, children were not only out of school, but they also faced severe restrictions to their daily physical routines, and in this period of inactivity, it was inevitable that there would be an increase in screen-time. When all these contributing factors are combined, it is not difficult to predict that the situation could cause rapid weight gain.”

Sure enough, wrote the authors, “the onset of puberty was earlier in the pandemic period compared to the previous year.”

A similar phenomenon of increased early puberty was noted during the pandemic in Korea and in India.

Dr. Jeanne Stolzer, a professor of child and adolescent development at the University of Nebraska, shared her thoughts with The Epoch Times. “I believe the early puberty we are witnessing is probably due to a convergence of variables.  However, I think that researchers need to be looking into two key variables: Screen use and COVID vaccinations. I also believe that lack of sunlight and physical activity may be contributing factors.”

“Although the multifarious effects of melatonin on the human gonadal system are not fully understood at this time, we do know that screen use clearly impacts melatonin levels,” she said. “Data indicates that melatonin affects oxytocin, vasopressin, and a plethora of growth hormones, therefore, early puberty may very well be related to increasing screen time as screen time disrupts the production of melatonin.”

Researchers also need to be looking into the correlation between vaccines and early puberty, observes Stolzer, “as preliminary data suggests that menstrual cycles have been adversely affected by the COVID vaccine. It stands to reason that age of puberty may also be impacted.”

One study, published in the International Journal of Clinical Practice in October, concluded that “COVID-19 infection and vaccination can affect the menstrual cycle in women.”

In a recent paper published in the International Journal of Sociology of the Family, Stolzer wrote, “Despite the scientific data demonstrating the plethora of negative effects associated with screen time, use of screens is increasing exponentially across the globe due in part to the world-wide pandemic.”

Yet, Stolzer laments, “As mounting scientific evidence continues to be published across continents confirming the negative effects associated with screen time, schools – from preschools to universities-are documenting significant increases in student screen time use.”

Stolzer said children “require large amounts of direct sunlight and rigorous outdoor physical activity if optimal development is to occur. As a direct result of the pandemic, access to the outdoors was severely limited in many communities thus hindering developmental processes exponentially.”