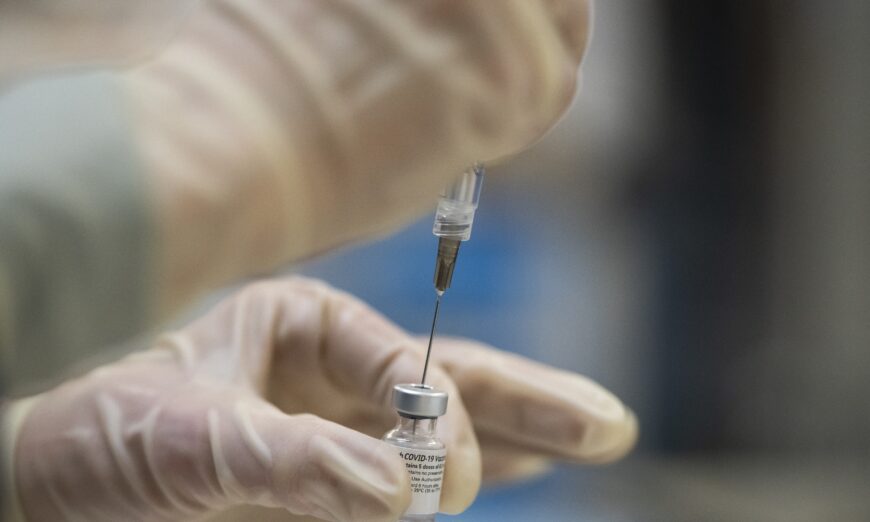 The efficacy estimates Pfizer has offered for its COVID-19 vaccine for young children are being dismissed as unreliable even as the shot is being readied to be administered to millions of American toddlers and babies.

But those estimates were determined “not to be reliable due to the low number of COVID-19 cases that occurred in study participants,” the Food and Drug Administration (FDA) said in a statement on June 17.

The estimates were based on just 10 COVID-19 cases—seven among kids who received a placebo, and three among those who received the vaccine. All occurred after Feb. 7.

But they were portrayed as evidence the vaccine should be given to children across the country during meetings with vaccine advisory panels for the FDA and Centers for Disease Control and Prevention (CDC) this week.

“High efficacy was observed in the course of this trial,” Dr. William Gruber, a senior vice president for vaccine clinical research and development at Pfizer, told panelists during a meeting on Friday.

The low number of cases resulted in wide-ranging confidence intervals, which indicate how confident one can be in the numbers.

The claimed efficacy is “a meaningless statistic,” Dr. Harvey Risch, a professor of epidemiology at the Yale School of Public Health, told The Epoch Times in an email.

A CDC official acknowledged during one of the meetings that the efficacy could end up being dramatically different than the numbers Pfizer is promoting.

“I would really hope in our communications that we not use that 80% effectiveness because my level of confidence in that number—I believe the vaccine is effective; I do not have any idea what that number will actually end up being,” Dr. Amanda Cohn, the official, said.

“Thirty days after vaccination, this could fall off very quickly, and we just want to monitor it closely,” she added.

Dr. Sarah Long, a member of the Advisory Committee on Immunization Practices, which advises the CDC on vaccine recommendations, was among those sharing a similar view on Friday, when the panel heard from Gruber.

“I just think we should assume we don’t have efficacy data” because of the small number of cases, she said.

Long was speaking hours after the FDA authorized the Pfizer and Moderna COVID-19 vaccines for toddlers and babies.

The primary endpoints of the trials of the vaccine makers were certain levels of neutralizing antibodies, thought to be a marker of protection against the CCP (Chinese Communist Party) virus, also known as SARS-CoV-2, the virus causes COVID-19.

The companies took a subset of trial participants and compared the levels of antibodies that the vaccines triggered with levels recorded in a randomized set of adults from trials conducted in 2020.

Dr. Stephen Hahn, the FDA’s commissioner at the time, said in interviews that year that the agency would not authorize any COVID-19 vaccines that weren’t at least 50 percent efficacious. The agency said that it “would expect that a COVID-19 vaccine would prevent disease or decrease its severity in at least 50% of people who are vaccinated.”

But it later offered a loophole to drug makers who already had authorized vaccines—they could use a technique called immunobridging, or compare the levels of antibodies in populations for whom the vaccines weren’t yet authorized to the levels in adults from previous trials.

Pfizer and Moderna both took advantage.

The companies only measured clinical efficacy, or protection against infection, secondarily.

“Remember, the efficacy was not a requirement for approval,” Gruber said.

Pfizer’s was pegged much higher, but can’t be relied upon, authorities now say.

The issue stems from Pfizer adding a third dose to its trial because the second dose provided virtually no protection against infection.

“I think we will have to wait a little bit longer for Pfizer to have more mature effectiveness data to have to have the kind of confidence that we’d like to put out numbers,” Marks added.

But officials maintain that the unreliable estimates don’t matter.

“From FDA’s perspective, we would have been confident in the clinical benefit of this three-dose primary series based on the immunobridging alone, even if there were no efficacy data,” Dr. Dorian Fink, another FDA official, told the CDC advisory panel.

“Immunobridging is irrelevant if there is approximately no serious risk to start with, which is the case for healthy children,” he told The Epoch Times.

The CDC’s panel is preparing to vote Saturday to advise the CDC on which children under 5 can get the vaccines.

Long, the panel member, indicated she was ready to vote for widespread use, even without any reliable efficacy figures.

“I would be comfortable enough with the immunobridging,” she said.

Officials and the vaccine companies say getting better effectiveness data will be possible once children in the real world, or outside the trials, receive the vaccines.

“Exactly what the vaccine efficacy is after dose three I think needs further data to inform,” Fink said. “And we would expect to get some of these data hopefully from updated analyses from the clinical trial if more cases are accrued recognizing of course that if the vaccine is authorized, that will result in unblinding of placebo recipients so they can get their three-dose series … and also from real-world effectiveness data.”