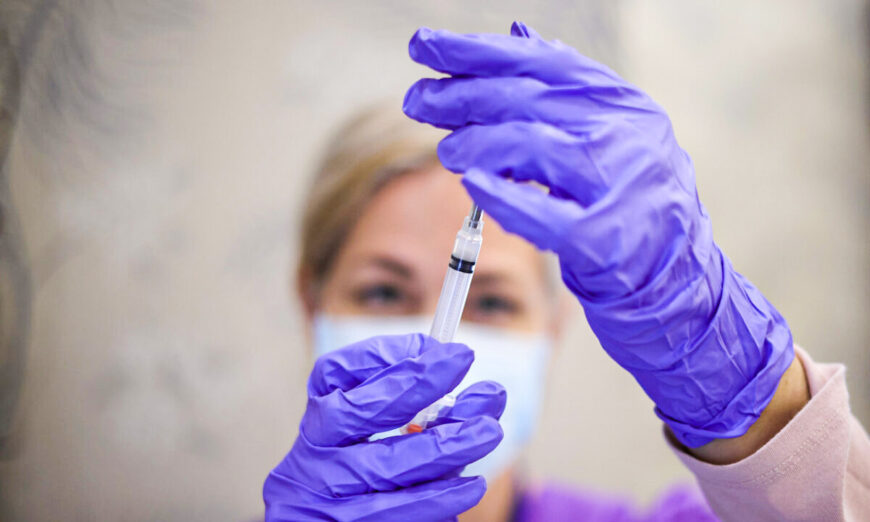 Despite the COVID-19 vaccines having been promoted as safe and effective by legacy media, many health care workers are refusing to take them, and those who openly speak out about their concerns get censored by Big Tech companies or kicked off their platforms.

Some nurses and doctors are refusing vaccine mandates even if their refusal will cost them their jobs.

The Epoch Times reached out to some of these health care professionals to see why.

‘Impossible to Give Fully Informed Consent’

Emily Nixon is a registered nurse who has been working in the health industry for 18 years. When her employer, MaineHealth, announced that it would make the vaccine mandatory, she quickly organized a group called The Coalition for Healthcare Workers Against Medical Mandates and filed a lawsuit.

“Thousands of health care workers have and will be losing their jobs. The already weak health care infrastructure of Maine will not withstand this devastating loss of staff. Life will be lost. Care is already being rationed. We have been experiencing a media blackout in this state,” Nixon said.

“Speaking from my point of view, an intelligent, healthy, and empowered health care professional that takes excellent care of herself, it is an insult to expect that I would accept an injection of unknown substance and efficacy and provide an example to the great people that I serve that they too should submit their power over to pharmaceutical companies—convicted felons—in an effort to put a band-aid on the gaping wound of reality.

“It is unconscionable to mandate injections without exemption, especially when the injection is a brand new medical product still undergoing its first year of study. Breakthrough cases are not properly reported on. We know this vaccine is ‘leaky.’ The safety and effectiveness of this vaccine has not been proven. There are other safe and alternative treatments. It is impossible to give fully informed consent without long-term, unbiased data. Threatening our jobs is blatant coercion. Our God-given right to bodily integrity and personal autonomy has been stripped with these mandates and we will not stand for it,” Nixon said.

‘The Side Effects Are Real’

Jaclyn Zubiate, who was working for Southern Maine Health Care, loved her job as a nurse practitioner.

“I did not take the vaccine, even though I will be terminated … Now with the data that we have, we know that the survival rate is quite high. Over the last 18 months, I have only sent one patient to the ER in respiratory distress. COVID has no distinguishing features among other viruses like other diseases that we have vaccines for. Why would I need a vaccine for something with a 99 percent survival rate that does not have any distinguishable features?” said Zubiate.

“Health care workers are not taking it because they know that the side effects are real. In urgent care, I have seen myocarditis, cellulitis, [and] unusual neurological symptoms, among a variety of other side effects. I have seen people very ill post-vaccine, and then go on to test positive. The positivity rate for contracting COVID on the vaccinated is very high per the recent studies and what I am seeing in my clinic. A vaccine should work, and it is not working. It should be tested for years on something other than humans before we call it ‘safe and effective.’ There have been over 15,000 deaths from the vaccine that the media is not talking about. I will never take that risk on myself,” Zubiate said.

‘The Data Speaks for Itself’

Jessica Mosher has been a registered nurse for more than a decade. She is a mother of four and a veteran of the United States Navy who lost her job for refusing the shots.

She was a nursing supervisor, patient observer manager, and nurse program director at Redington-Fairview General Hospital.

“Protecting my health and staying true to my religious convictions will always be my choice over a job. The scriptures promise that ‘as long as the earth remains, there will be seedtime and harvest’; this side of heaven, we have an abundance of employment options, but only one life,” Mosher said.

“I have a master’s degree in nursing and am employed as a professor of nursing research and evidence-based practice. I am skilled in collecting and analyzing data and in drawing conclusions. I did not rely on the media, government, or Big Tech for any of my health care decisions prior to COVID-19 and I have no plans to change course. The data speaks for itself related to the harm these experimental vaccines have caused and the lack of studies that have been conducted.

“What I have seen as a nurse and what others have shared post-vaccination seals the deal. The virus, like the cold and flu, does not have a cure. However, it has an almost 100 percent survival rate. Those pushing the vaccine are following the money. I am following the science. Health care workers do not walk away from their passion or stable salary to be difficult. The amount of people willing to be fired should be cause for alarm in and of itself,” she said.

John Lewis worked for a large hospital in southern Maine.

He is pro-life and believes that all life is precious.

“Knowing all three available vaccines were either tested, developed, or produced using fetal cell lines from elective abortions, I could not in good conscience violate my deeply held beliefs. Anticipating I would be able to file a religious exemption, it is hard to accept [that] I’m not being afforded an exemption based on my duties after considering I am a remote worker and do not interact with patients,” Lewis said.

“Outside of medical or religious exemptions, many health care workers consider the risk-benefits of getting the vaccine. It is the same approach to providing patient care, where the patient is allowed informed consent. Many of the health care workers have natural immunity. Others do not feel there is enough long-term research into adverse effects. Also, these health care workers see with their own eyes what is happening in hospitals, which isn’t necessarily in line with the narrative,” Lewis said.

‘None of Us Are Seeing’ Surges

Heather Sadler, a registered nurse, also loves to be a nurse, but she said that her and her family’s health are much more important than her paycheck.

“This is new vaccine (if you want to call it that) technology that has NEVER been deployed successfully, and has no data regarding long-term effects, not to be confused with ‘side effects’ as the general public seems to be hung up on. I have always been someone who analyzes my health care choices through the lens of risk-benefit ratio. Knowing what I know about COVID (and I’ve done a lot of research), I do not fall into any of the high-risk for severe illness/death categories: age over 65, obese, heart disease, diabetes, chronic lung conditions, and immunocompromised. For me and my immediate family, there is greater risk of having a side effect, or long-term effect from injecting a virtually unknown substance into ourselves,” Sadler said.

“I am a nurse in Oncology/Hematology, and I’m seeing that we are experiencing an increase in hospitalizations/referrals for clotting and bleeding disorders. For one example, in one week, we had two patients in the hospital who were diagnosed with a rare clotting disorder … And this happened twice in one week in rural central Maine. The only common factor, a COVID shot three days prior in each case. Was this reported to the CDC? I do not know.

“Only 4 of the roughly 20 to 25 people I’ve known personally who have tested positive for COVID recently have been unvaccinated. Yes, unvaccinated. The majority of the people around me who have tested positive in the past three months have been fully vaccinated. Why would I want to risk side effects or long-term effects of the shot if I can still contract and spread this virus? It’s just not logical. Those two examples clearly blow their theory that ‘it’s safe and effective’ out of the water,” Sadler said.

“I am in constant communication with other health care workers in the state of Maine and none of us are seeing the ‘surges’ that the general public is told is happening.”

“This is America! I have every right to make an educated decision regarding my health care. No matter what you are told, what I do has no direct effect on you,” Sadler said.

‘Freedom Is the Most Important Thing’

Sherri Thornton was a Maine SAFE Advisory Board member and chair and has been a nurse for 45 years.

She was planning to retire but wanted to work until the end of the year; however, when she saw the mandate coming, she decided to retire earlier.

“I believe that freedom is the most important thing in life outside of salvation. No one has the right to tell me what I can or can not do with my body except the Lord. The vaccines have been produced with fetal tissue, and I am staunchly opposed to abortion,” Thornton said.

“The components of the vaccines are not safe. There are many side effects that cause more harm than the coronavirus. It doesn’t protect against the variants.  … Vaccinating everyone will not gain herd immunity and will only cause more variants to which those without natural immunity will succumb,” Thornton said.

Three other health care workers that are against the vaccine mandates reached out to The Epoch Times but didn’t want to have their names or employers disclosed.