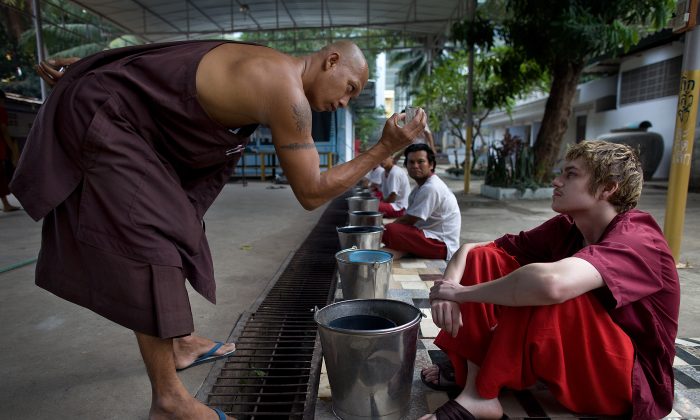 Sean Lampon,19, from Alaska gets advice at the Thamkrabok monastery in Saraburi, Thailand. (Paula Bronstein /Getty Images)
Good to Know

According to Yoona Kang, a postdoctoral fellow at the Annenberg School for Communication at the University of Pennsylvania, “mindfulness is usually defined as having awareness of the present moment” and there’s evidence it can reduce negative reactions to emotionally charged situations.

“Health messaging often causes people to react emotionally in negative ways, so we investigated factors—including mindfulness—that could potentially influence people to be more receptive to health messages and more motivated to change their behavior,” said Emily Falk, an associate professor of communication and senior author of the paper published in the journal Mindfulness.

Some people, when confronted with health messages, felt really bad about themselves.

The study assembled a group of people who achieve only low levels of weekly exercise and exposed them to a variety of health messages. The researchers observed the reactions of the participants to the health messages, recorded their motivation (or lack thereof) to change their behavior, and later inquired as to whether the participants had actually made any changes in their behavior.

In order to gauge how mindful each person was in their day-to-day lives, the researchers asked each participant to complete the Mindful Attention Awareness Scale (MAAS). The MAAS is composed of 15 scenarios—including “I forget a person’s name almost as soon as I’ve been told it for the first time” and “I tend to walk quickly to get to where I’m going without paying attention to what I experience along the way”—that are answered on a scale of 1 to 6, ranging from “almost always” to “almost never.” The higher a person’s total score, the more mindful that person is considered to be.

The study showed that less mindful people were also less likely to make a positive change in their behavior as a response to health messaging.

“Some people, when confronted with health messages, felt really bad about themselves,” said Falk, “and that didn’t help them change their behavior. And in the long run, it doesn’t help us have a healthier, happier population.”

People who are more mindful, however, reacted less negatively to health messages and were less likely to feel ashamed after seeing or hearing them. These people, in turn, were also more likely to change their behavior to be healthier.

The researchers’ findings add to the growing literature on the health benefits of mindfulness, and they believe this has important implications.

Additional researchers from the Annenberg School and the University of Michigan contributed. The National Institutes of Health provided funding.

This article was originally published by University of Pennsylvania.  Republished via Futurity.org under Creative Commons License 4.0.