Healing Powers of Shen Yun’s Music ‘From the Creator’ 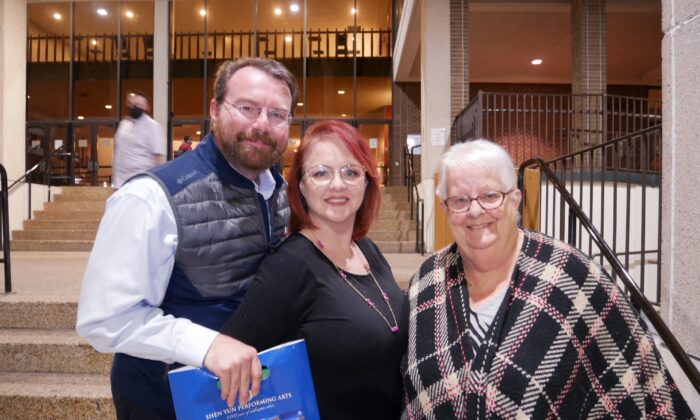 James May with his wife Jennifer and mother Anna at the Shen Yun Performing Arts performance at Johnny Mercer Theatre at the Savannah Civic Center in Savannah, Ga., on Jan. 5, 2022. (Sherry Dong/The Epoch Times)

SAVANNAH, Ga.—The Chinese character for “medicine”—藥—comes from the character for “music”—樂. James May, a senior director, and his family felt the powerful energy of Shen Yun Performing Arts and were mesmerized by the deep connection they felt with the music at its Savannah performance.

The five notes of the pentatonic scale are said to be connected to the five elements and the five major organs of the human body. So listening to the correct music is said to have the ability to heal a person of their ailments.

It’s our ability to believe and to have hope and to have faith. I believe those things are the most powerful healing tools that we have.
— James May

“I believe that’s from the Creator, those healing powers,” Mr. May said. “It’s our ability to believe and to have hope and to have faith. I believe those things are the most powerful healing tools that we have.”

One piece left a very deep impression on Mr. May, played by the erhu soloist.

“Oh, it’s so beautiful and it’s so emotive,” he said. “And it echoes of the history and the passion of Chinese culture and what it once was, and what it could be again … it speaks from the heart of the ancestors and from the elders—that’s what I pictured from it. It just it reverberated with me and in my spirit, and it was so all inspiring. It was beautiful.”

He applauded the Shen Yun erhu virtuoso on capturing such moving and powerful emotions on her instrument.

“There’s something about the passion and not only in the artist, herself, but the instrument. It sings to your heart, and it sings from her heart—it kind of calls you to it as it pulls you in closer. There was some pain and some sorrow, and then there was joy and elation, and all of that I get that from the instrument,” he said.

Mr. May also spoke about how he felt that music is a way to communicate with the divine and how people are losing that ability.

“The ability to communicate with love and compassion, and I think we as a society, as as a world, we’ve lost that and that’s what the Creator created us for. That’s what God created us for. He created the angels to serve Him. He created us to commune with Him. And we don’t know how to do that. And that young lady did it beautifully. I believe that that’s how we have a spiritual connection. She expressed this talent that God has given her through her song.”

He was also struck by the ability of New York-based Shen Yun to captivate the audience’s attention and have everyone leave the venue feeling more positive.

“We got an opportunity to come away from the madness that surrounds us every day. Hopefully, that peace they take with them tonight, that’s something they’ll carry with them into the next day. And you’ll find that that kind of manifests on itself every day. So hopefully, they find some type of peace and happiness in each day with that.”