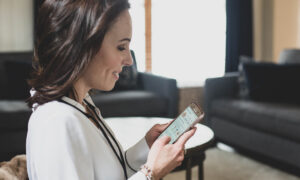 Have You Ever Wondered What It Looks Like Inside the Womb?

A partner, friend, colleague, family member or yourself, announces the good news: a child is on it’s way. A new journey now begins, one of mystery and deep awe.

As the weeks pass, you’ll be wondering about the state of that baby, who is dreaming safe within the walls of the womb.

Now you’ve seen the baby for the first time, thanks to an ultrasound scan. But you are still wondering, “How does it feel like in there? How is it going?”.

Thanks to Alexander Tsiarias’ groundbreaking medical imaging technology, we can now experience the full development of an actual foetus from conception to birth.

Tsiarias has created an ibook exploring the biological marvels of a 9 month pregnancy. It’s called From Conception to Birth: A visual Guide Exploring Your Pregnancy.

Tsiarias is the founder of Anatomical Travelogue. This award winning NYC company gathers scientific data and with the help of CAT scans, MIR, specialized microscopes and computer technology, creates 3D visualizations of the human body that is both useful for prevention and diagnosis.

Alexander Tsiarias has also created The Visual MD, an online portal that offers thousands of health articles and a rich visual library, so the reader can better understand how the body or an illness works. Its aim is to translate abstract medical information into a visual exploration, one that will inspire a change towards a healthier lifestyle.

As Alexander explains, when we’ll understand ourselves better, we’ll take better care of ourselves.

A pregnant woman’s abdomen at 0 months, just after conception has occurred. The image reveals the skeleton and reproductive organs. The tiny fertilized egg, now called a zygote, quickly begins to split, dividing into two cells after about 30 hours, four cells after 40 hours, and 12-16 cells in 3 days. As it divides, it’s slowly carried down the fallopian tube by a series of tubal muscle movements.

A pregnant woman’s abdomen at 3 months. It’s the end of the first trimester. The rapidly expanding fetus is now almost 3.5″ (8.7 cm) long and 1.5 oz (43 g) in weight. The previous week saw an explosion in growth: the fetus’s weight has increased about 60% since week 11. The placenta is well developed at this point. Unborn babies can hear things from as early as 12 weeks.

A pregnant woman’s abdomen at 6 months, the end of the second trimester. The fetus is now about 9″ (23 cm) long and weighs nearly 2 lbs (820 g). The brain now begins a major growth spurt, which will consume more than 50% of the energy used by the fetus.

A pregnant woman’s abdomen at 9 months full term. The average birth weight for babies in the US is a little over 7 lbs (3175 g) but healthy babies come in a range of weights from 6 lbs to 10 or even 11 lbs. The baby is in the birth position head down.

It is a close-up world for a newborn. Babies are born extremely nearsighted and can see things clearly only when they’re about 8-12 inches away which is all the more reason for infants to focus on the faces of their mothers as their mothers hold them close.