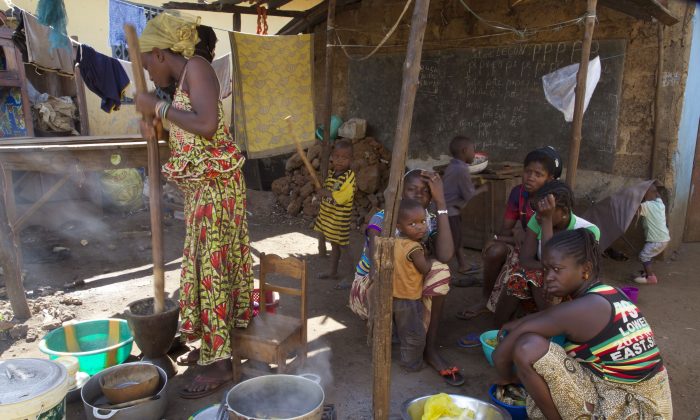 CONAKRY, Guinea—The World Health Organization declared the Ebola outbreak over in Guinea Tuesday, Dec. 29, a huge step in the fight against the world’s largest epidemic and the first time there are no known cases anywhere since the virus emerged in Guinea two years ago.

The West Africa-concentrated outbreak last year spread to neighboring Liberia and Sierra Leone. Liberia is on a countdown to become Ebola-free on Jan. 14, which could mark a final end to the epidemic. Sierra Leone, the third West African country to be hammered by the epidemic, was declared free from transmissions on Nov. 7. No new cases have been reported anywhere in the world in at least 21 days, according to WHO.

“This is the first time that all three countries—Guinea, Liberia, and Sierra Leone—have stopped the original chains of transmission that were responsible for starting this devastating outbreak two years ago,” said Dr. Matshidiso Moeti, WHO regional director for Africa.

But experts warn that cases may still emerge. So far, the virus has killed more than 11,300 people worldwide.

“We definitely cannot let our guard down,” said Dr. Tom Frieden, director of the Centers for Disease Control and Prevention. “It’s certainly possible we will have more cases and more clusters in the coming months.”

The world needs to be ready to surge in more rapidly when a country’s abilities are overwhelmed.
— Dr. Tom Frieden, director, Centers for Disease Control and Prevention

On Tuesday, about 50 Ebola survivors, journalists, and family members of those who lost loved ones gathered at WHO’s Ebola headquarters in Conakry, where the mood was of celebration, mixed with sadness.

“Guinea is a blessed country. We hope that all the dead, and the victims of this disease will be sacrifices to the Guinean nation so that no other epidemic touches us,” said survivor Ibrahima Sow.

Mariam Camara, with tears in her eyes, said the country lost some of its best to Ebola, including her mother and brother, among the more than 2,500 people who died in Guinea.

“That cursed disease separated me from that which is most beautiful to me in my life,” she said. “But it’s over. We are turning a page on Ebola, definitively.”

This West African nation will hold a big celebration Wednesday, overseen by President Alpha Conde and including testimonies by Ebola survivors. Later, popular West African artists such as Youssou N’Dour and Tiken Jah Fakoly are to perform at a concert in the capital.

WHO declares that Ebola disease transmission has ended when the country goes through two incubation periods—21 days each—without a new case emerging.

Guinea had the fewest Ebola cases of the three countries, but its bigger size, extensive remote areas, and a stigma and distrust of health workers allowed the outbreak to persist longer here.

Frieden also warned that if it persists or re-emerges in animals, a transmission to humans is still possible.

“That’s why it’s so important these countries be ready for additional cases,” he said.

He said the CDC is working on a set of protection measures, including laboratories that can test for Ebola and other dangerous microbes. Trained investigators within the three West African countries will help stop and prevent threats, rapid tests are available, and emergency operation centers are in place to oversee a robust response.

“The world needs to be ready to surge in more rapidly when a country’s abilities are overwhelmed,” he said.

The outbreak claimed the first lives in December 2013 but only made headlines in March 2014 in Guinea, before quickly spreading to Liberia and Sierra Leone. By early June 2014, even though the Ebola epidemic was the deadliest ever recorded, the WHO resisted sounding the international alarm until August, a delay that some argue may have cost lives.