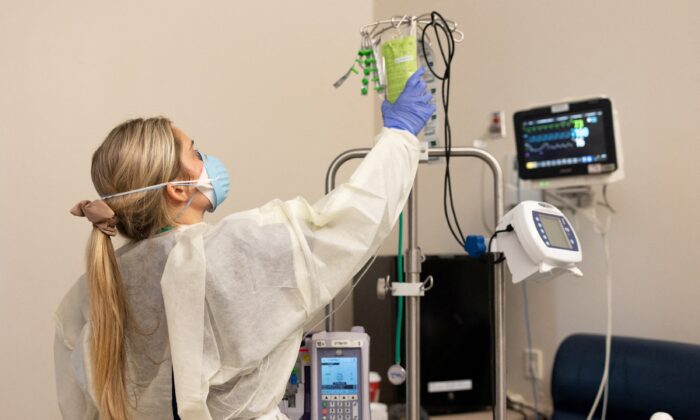 A nurse administers a monoclonal antibody treatment to a COVID-19 patient at the Children's Hospital of Georgia in Augusta, Ga., on Jan. 15, 2022. (Hannah Beier/Reuters)
Covid News

The monoclonal antibody treatment from GlaxoSmithKline (GSK) and Vir BioTechnology protects well against the Omicron subvariant that is becoming more prevalent in the United States, the companies said Feb. 10.

Preclinical data suggest that sotrovimab, the monoclonal, “retains neutralizing activity against the BA.2 subvariant of Omicron,” the companies said in a press release.

The data, based on pseudovirus and pharmacokinetic testing, was not made public. A Vir spokesperson didn’t respond when asked why. The companies said the results are being shared with government authorities around the world and that they plan on publishing them on the preprint server bioRxiv in the coming weeks.

“Our view of the data is that they support the ongoing role of sotrovimab as a critical treatment in the fight against the continuously evolving SARS-CoV-2 virus,” Vir’s CEO George Scangos said in a statement.

The GSK-Vir treatment is the only monoclonal currently allowed to be used against the virus in the United States. Drug regulators in January barred the use of the two others they previously cleared from Eli Lilly and Regeneron. Regulators cited early data that suggested the treatments weren’t effective against Omicron, a move some experts supported but others did not.

Omicron, a CCP virus variant, became dominant in the country in December 2021, displacing the Delta strain.

All three monoclonals authorized in the country were effective against Delta, data show.

Eli Lilly has already asked the Food and Drug Administration to clear a different monoclonal, bebtelovimab, than the one that has been restricted.

The company “has confirmed in pseudovirus testing that bebtelovimab retains neutralization against BA.2,” a spokesperson told The Epoch Times via email, adding that “Lilly has and will continue to evaluate the neutralization of bebtelovimab against any new variants of concern that emerge.”

Regeneron’s antibody treatment doesn’t work well against either Omicron or its subvariant, a spokesperson for the company told The Epoch Times in an email.

“Our next generation monoclonal antibody candidate is active against all Omicron variants, including BA.1, BA.1.1 and BA.2,” the spokesperson added.

Regeneron hopes to start clinical development of the candidate in the coming months.