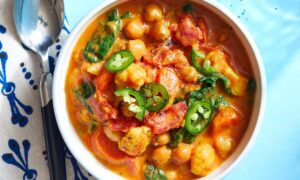 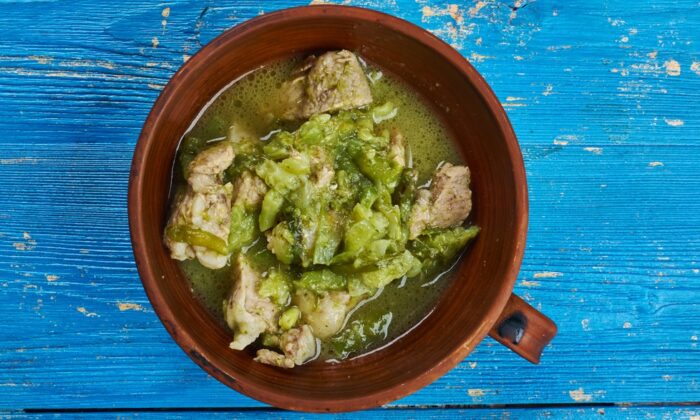 “You don’t need chicken soup. You need green chile,” I was told the first time I had a cold in New Mexico, years ago.

My recipe for green chile (New Mexicans don’t say “stew,” as it’s inherent in the term “green chile”) is adapted from those used by generations of cooks I learned from in New Mexico and Colorado. Adjust it as you like, but I strongly urge no skimping on the garlic, cumin, or chile—you wouldn’t order a cappuccino without coffee or milk, would you?

Broil the chiles in the oven for 10 minutes on each side, until lightly charred blisters appear. Remove from oven, cover with a damp cloth, and let steam until the skins loosen. Peel the skins and dice.

In a large stockpot or Dutch oven over medium-high heat, lightly caramelize the garlic and onions in the lard or vegetable oil, about 10 minutes. Add the pork and brown, about 20 minutes.

Add the peeled and diced chiles to the pork, along with the cumin, sage, oregano, salt, and pepper. Add enough water or chicken stock to cover, bring to a boil, then reduce heat and simmer for 30 minutes.

Thicken the stew with cornstarch as desired, and taste to adjust seasonings. Serve with fresh corn tortillas and ranch beans—blue corn is traditional, but yellow, red, or white are OK.

Eric Lucas
Follow
Eric Lucas is a retired associate editor at Alaska Beyond Magazine and lives on a small farm on a remote island north of Seattle, where he grows organic hay, beans, apples, and squash.
TOP NEWS