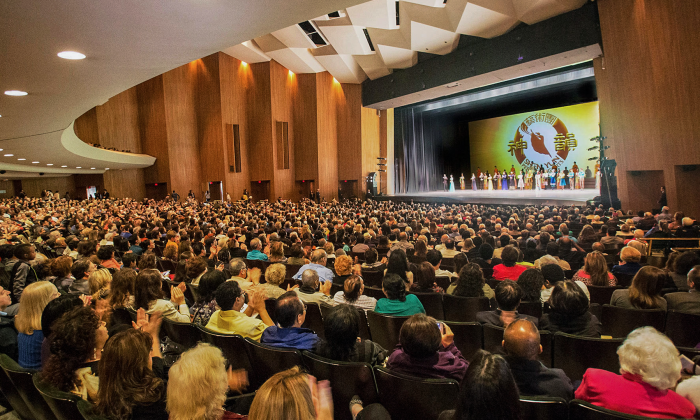 LONG BEACH, Calif.—Freddie Ravel, a Grammy-nominated composer and musician was amazed by Shen Yun’s evening performance on March 20, at the Terrace Theater.

“Wonder is a big one. Right wonder, you have a sense of wonder,” Mr. Ravel said of Shen Yun. “You are blown away, if you will, by the tradition. You realize you’re looking into thousands of years of incredible history. … In a short amount of time, you’re getting swept into millennia of information. So I love it!”

A fascination with music has driven Mr. Ravel since the age of 5. He has worked with many musical luminaries: Madonna, Prince, Earth, Wind and Fire, Quincy Jones, Carlos Santana, Al Jarreau, the Boston Pops, and more. Currently he has built on his talent with music to emerge as an international speaker and coach for personal and professional growth through the medium of music.

“I love the show. I’m seeing an entirely new lens of looking at China,” Mr. Ravel said,” There’s something very genuine and authentic about the experience. I’m loving it. I’m really enjoying this.”

Classical Chinese dance has a long and illustrious 5,000 year history. Insight into the history comes from the Shen Yun website: “Classical Chinese dance is rich with expressive power. Through expression of bearing and form, beautiful dance movements bring out the inner meaning of intrinsic thoughts and feelings, reflecting the peculiarities of human nature, the standard for human conduct, moral concepts, mental state, one’s value system, and so on.”

Mr. Ravel noted,”There was a lot to touch the heart. I think a lot of it is the grace and there’s a tremendous graciousness that is going on throughout the whole thing. Everyone exudes grace and nobility and the things that our world needs more of, frankly.”

Everyone exudes grace and nobility and the things that our world needs more of, frankly.
— Freddie Ravel

“We live in a world that doesn’t show that too much,” he added. “So you come here and you have a breath of fresh air. You’re reminded of the potential of when human beings do good things.”

Grace, power, and elegance is exuded by both the male and female dancers, one cannot help but be captivated by it, he said.

Shen Yun performances create a unique and magical environment that transport their viewers to a place where heaven and earth are connected by the arts—one which dazzles the senses and draws the audience into the ancient realms, dynasties, and wonders of China.

The arts represented include the dancers, their lovely costumes, singers, Shen Yun’s Orchestra, which blends Western and Chinese instruments, as well as an animated digital-backdrop.

“To also illustrate the incredible costumes, the incredible movement, the technology with the screen is fantastic,” he continued. “There’s a lot of humor in it. And there’s a lot of more noble moments in the show. And then in the middle of it, to have a 9 foot grand piano and the singer come out.”

Impressed with the music, Mr. Ravel found somethings which surprised and amazed him.

“You know what’s amazing, what I found very interesting about the music, there were actually moments in the music that reminded me of some of the American Western music that I grew up with listening to,” he said. “So I was struck by the connection between the Asian music, the Chinese music, and some of the Western music we’ve written in the United States.”

“The similarities were kind of striking to me. I especially loved the use of the Chinese instruments that were also used with the oboe and the clarinet. So the blend East and West is magical,” he added.

He said there are a few words he would use to sum up his evening of Shen Yun: “dignity,” “nobleness,” “wonder,” and “awe.”

Of course, he is going to recommend that his friends see Shen Yun!

“This is an opportunity for those of us here in America to have a chance, in a short amount of time, to take a little peek at some of the tremendous traditions that a great 5000-year-old culture like China can offer,” he said.