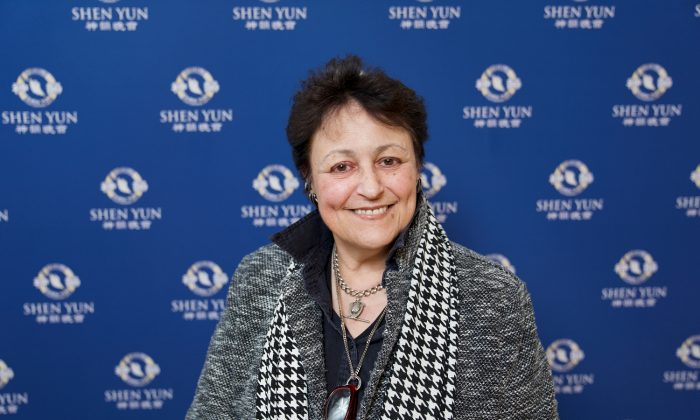 NEW YORK—She’s an actress, singer, and one of the most popular narrators of audio books in the United States. Indeed, she has won more Audies (think Oscars for the stories we hear rather than see) than any female narrator, and has narrated over 400 audiobooks.

Barbara Rosenblat attended Shen Yun Performing Arts on Jan. 13 at the New York The David H. Koch Theater at Lincoln Center after her friends, Robert and Masha, bought her a ticket as a Christmas gift.

Rosenblat recounted her friends telling her that she must come to see Shen Yun.

“I went, ‘Wait a minute, I’ve seen thousands of commercials for this show, for months.’ And I thought, ‘Ok, Lincoln Center, David Koch theater. I’ll be there.'”

She was not disappointed.

“It was just wonderful,”Rosenblat said. “Two hours—I was not bored for a minute.”

“Stunning dancing, gorgeous colors, but for me the most interesting part was the integration between the animation and the live dance. That was just stunning.”

Shen Yun has a unique digital backdrop which displays magical worlds and faraway places. Moving into and out of those worlds are Shen Yun’s dancers.

“The talent in this show, there must have been 30 dancers up there,” said Rosenblat. “The talent was top rate, top rate beautiful dancing, even the curtain calls, when they came out, and they just continued to thrill throughout the entire evening.”

Shen Yun features solo performances, a live orchestra of Chinese and Western instruments, and dancers in elaborate costumes, which may be ethnic styles of clothing, or the dress of a particular dynasty’s people, and which can include props like long billowing sleeves or waist drums.

“Those costumes, they’re not just costumes.” said Rosenblat. “They’re magical implements that provide you with just an eyeful of beautiful, stunning staging.”

Shen Yun is headquartered in New York, where they began in 2006 with the mission of reviving China’s almost-lost culture, the 5,000 years of Chinese history and culture that has been suppressed in China by the communist regime since they took power in China mid-20th century.

Each year Shen Yun shares the ancient culture with audiences in cities all over the world, touring with a new production and letting more people know a history that belongs to China and the world, through classical Chinese dance, orchestra, and story.

“The stories are this marvelous buffet of Chinese history, music, culture,” said Rosenblat, “and it’s all so relatable. There was nothing that was so complex you didn’t understand. It made sense, you related, it was enjoyable, you were amazed at the gifted performers and that wonderful orchestra.”

“It was a magical evening.”

Rosenblat said that Shen Yun’s stories are timeless and gave the example of “The Story of Liang Zhu,” a classic tale about a young scholarly girl who dresses up as a boy so that she can go to school and study. On her journey, she meets another aspiring scholar, named Liang Shanbo, who is unaware of her identity.

“These are timeless historic stories, and that’s why a show like this is just wonderful for young and old alike,” said Rosenblat.

Traditional Chinese culture is spiritual, and China was once known as the Celestial Empire.

Rosenblat learned after the performance that China’s traditional 5,000-year-old culture is divinely inspired.

Rosenblat said, “I think anything that lifts the soul and the spirit in a group like an audience is divinely inspired.”

With reporting by NTD and Carrie Gilkison.