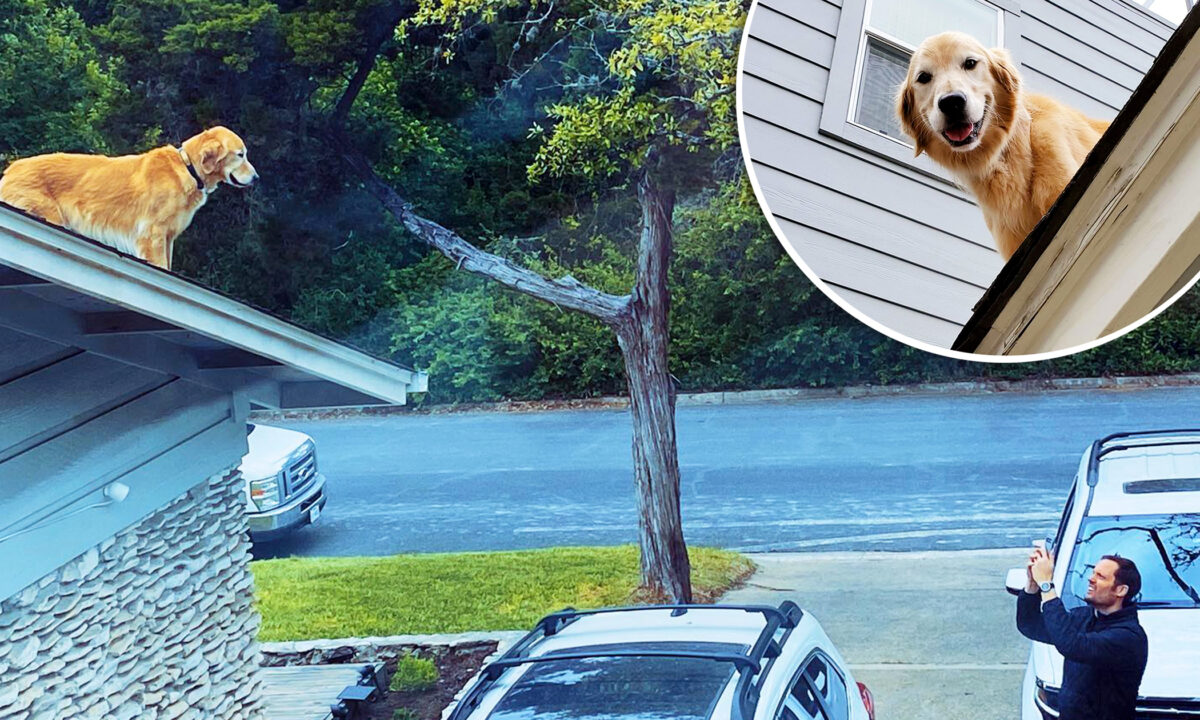 (Courtesy of the Lindenmuths)
Animals

Golden Retriever Finds Out He Can Get Onto Roof, Spends His Days Greeting Passersby

Huck the dog just loves attention, and he’s found a novel way of getting it.

The golden retriever with the big personality spends almost all day up on the roof of his home, just waiting for folks to pass by. And if someone happens to show up with a camera, the handsome dog loves making strikingly adorable poses for photos.

“He likes it when people wave at him and say, ‘Hi Huck, how are you doing?’ and he will go down wagging his tail,” said owner Justin Lindenmuth. “He really likes the attention.”

Justin, his wife Allie, and their two small children live between Austin and Victoria. The couple brought Huck home in 2011. And it was immediately apparent their “brand-new puppy” was quite the character.

“He’s very spry and rambunctious,” Justin said. “He’s very loving and likes to be with his people. And he’s quite needy for attention. But he’s very much loved in our family.”

The day Huck discovered the roof was a funny one. Justin was working from home when he heard a rumbling noise coming from above. Thinking it was a raccoon or some other creature, he ran outside.

“There was Huck, wagging his tail and barking, looking down at me from the roof. We have a hill in the backyard, and he just hopped from the hill to the roof and was hanging out up there,” Justin said.

Justin yelled for Allie to come and look.

“Huck was very excited,” Justin added, “because there was a new vantage point for him. He could see down the street each way. He was looking down at us versus being on the ground with us, so he thought that was pretty cool.”

Huck has been going up onto their roof for several years, but the novelty still hasn’t worn off. Those who live in the neighborhood are well used to seeing him up there, and he’s become a much-adored sight. So much so, that after a large hurricane in Louisiana when a lot of animals were displaced, Justin and Allie started making Huck shirts to raise funds for a local animal shelter.

Allie said that once when Huck was little, he jumped the wrong way onto the roof and landed awkwardly. It was only a 4-foot scramble, but he learned his lesson, sticking to his usual route from then on. Nevertheless, when he got older, Huck’s owners built him a small ramp to allow him to access the roof without any effort.

Allie said: “He’d been jumping for a long time, but it wasn’t great for his hips. Golden retrievers can suffer with bad hips when they get older so we built a little ramp for him.”

The family don’t let Huck spend time out on the roof when it’s raining, or in extreme heat, but say that whenever he’s allowed outside, he heads up to his happy place. Now, the Lindenmuths have a new 5-month-old puppy, named Bluebell, who came from the same family as Huck.

“She looks very much like Huck, and tackles him all day every day. She’s wilder than he is, but she’s very sweet.” Allie said.

For now, Bluebell is far too little to join her big brother up on the roof, so the sentry point is all his, and he’s become a permanent fixture.

Justin said, “I think people really enjoy seeing him when they’re walking their dogs, and knowing that they’re always going to get a bark or a tail wag whenever they walk by.”