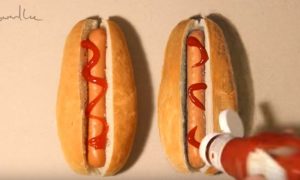 Can You Tell The Difference Between A Real Hot Dog And A Fake One?
0
Share Now
TelegramFacebookTweetEmailTellMeWeReddit
Copy Link 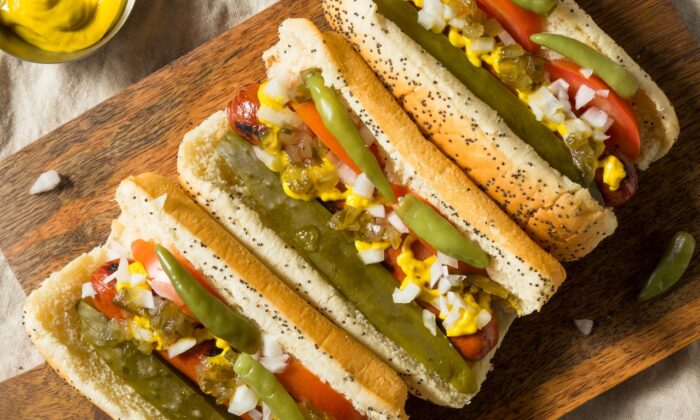 Chicago-style hot dogs, dragged through the garden—that is, with the works. (Brent Hofacker/shutterstock)
Food & Dining

A brief history of the Chicago-style hot dog, an all-American classic—and where to get your fix
By Kevin Revolinski

“I’ll take a dawg, run it troo da gahden, in a paper bag ta go,” said my friend Danny Higgins, adopting a strong Chicago accent as he explained how to order the works on a hot dog in his city. We sat eating a couple of dogs together at Mustard’s Last Stand near Northwestern University’s campus. My wife Tip and I were in Chicago for the weekend to celebrate both the Fourth of July and National Hot Dog Month, trying to sort out how the city came to have its own way of eating this particular American favorite.

My Chicago friend and food-enthusiast Geoff Burton happily informed me of the basics: a Vienna Beef hot dog in a poppy-seed bun, topped with yellow mustard, piccalilli (a pickle relish often the bright color of green candied cherries), onion, tomato, a pickle spear, sport peppers (short, pickled, medium-spicy green peppers similar to pepperoncini), and celery salt. Chicago dogs are typically steamed, simmered, or sometimes char-grilled, but never boiled or left on a roller like at the gas station. Natural casing is not required, but it does give the dog that marvelous snap when you bite into it. And good lord, don’t ask for ketchup, positively verboten by the faithful.

How did all this come about?

Origins of an American Classic

The origins of the sausage—chopped meats in animal gut—are “lost in the mists of time,” writes Bruce Kraig, professor emeritus in history and humanities at Roosevelt University. In “Hot Dog: A Global History,” Kraig tells us that archaeologists have found evidence of such as far back as the Upper Paleolithic 20,000 years ago.

The hot dog, however, is a truly American food, but with its origins, of course, in immigration. We also call them franks—short for Frankfurter, from Frankfurt, Germany—and wieners—as in from Wien, or Vienna, Austria. Myths abound as to the name origin—a World’s Fair, Coney Island, various ballparks—but Kraig digs through the filler to find the meat of the story: a food cart near Yale in the 1890s. The Kennel Club, often referred to as the Dog Wagon, served a sausage in a split bun.

Klein’s book documents historical references to this and similar carts, and the term “hot dog” appears in 1890s magazines, cartoons, and songs. Recent arrivals in America, Germans were mocked for their accents, and jokes were made at their expense—including some that suggested that dogs made it into their sausage recipes. You still see dachshunds wearing buns in hot dog stand logos.

Chicago Takes Up the Dogs

In 1865, Chicago’s Union Stock Yards opened and soon saw millions of animals arriving annually in the meatpacking district, compelling poet Carl Sandburg to dub the town “Hog Butcher for the World” in his 1914 poem “Chicago.” Unsurprisingly, Armour & Co. and Oscar Mayer got their starts in Chicago, and in 1893, after their all-beef hot dog made a splash at the World’s Fair, Austrian-Hungarian immigrants Emil Reichel and Samuel Ladany founded Vienna Sausage Co. in the heart of Maxwell Street.

In the 19th century, the Maxwell Street Market opened in what was then the Jewish quarter of Chicago. As the bustling market and neighborhood grew, it was often referred to as “the Ellis Island of the Midwest.” Unlike traditional frankfurters, which contained a mix of pork and beef, the Jewish sausages went all beef. The mere absence of pork didn’t necessarily make them all kosher, but the general public had the impression that these were higher-quality dogs.

Abe “Fluky” Drexler opened Fluky’s Red Hots in 1929, the first hot dog stand on Maxwell Street. Others followed. Vendors highlighted the toppings as a salad on the dog, especially during the Great Depression. This “Depression sandwich” cost five cents; an even more Depression (and depressing) option at some stands was just the bread and toppings, without the dog, for two cents. When Maxwell Street fell to development in 1994 and the market moved, vendors were cast about town or closed altogether.

But why no ketchup? Vienna Beef’s marketing surely pushed the tradition forward, but ketchup has other detractors. Bob Schwartz, a Vienna Beef executive, authored a hot dog history book, “Never Put Ketchup on a Hot Dog.” In 1954, Jimmy Faruggia founded Jimmy’s Red Hots with the strict rejection of it. They both point out something even my 5-year-old self knew: Ketchup covers up the flavors of things. While that prevented a finicky child from starving to death, using it on a dog suggests the ingredients aren’t delicious.

And once an idea like this spreads, it becomes a cultural signifier: You ain’t from Chicago if you ruin a dog with ketchup.

Geoff put together a short itinerary of great places to go Chicago-style. He prefers them char-grilled (a char-dog) and smothered with a good cheese sauce. To be clear, this list is nowhere near exhaustive, nor is it ranked. There are no losers here—only wieners.

First on Geoff’s list, and his favorite place for that cheese sauce, is also my personal favorite, first visited when I lived in Chicago back in 1991: The Wiener’s Circle. Famed for its brusque yet endearingly profane treatment of customers, the shop is currently under renovations, soon to reopen serving alcohol. Their char-dogs should be on any short list of Chicago dog stands.

Our first stop, then, was the home of the star of all “true” Chicago dogs: Vienna Beef. While some shops use other brands or even make their own sausages, the bright yellow brand name or neon-lit signs are proudly displayed in keepers of the faith. The company loves brand loyalty, and inducts vendors into a hall of fame each year.

The South Side factory keeps a store across the street where you can stock up on all things hot dog, including the precise (and branded) toppings. Not getting to Chicago soon? They’ll ship you any of the ingredients, including a couple of “kits” only available on their website.

The store also serves as a hot dog stand, with a standup counter and outdoor picnic tables. Outside, I fumbled with my hot dog and camera. “Gimme ya camera!” said a burly guy, without introduction, wiping his hands on his pants after leaving his dog at a table under a Vienna Beef umbrella. My startled look prompted him to add, with a stereotypical Chicago accent that would put a Saturday Night Live sketch to shame, “Get a picture of you two.” My wife and I posed under the Vienna Beef sign, and he snapped a few shots and returned to his meal.

One of the Maxwell Street Market survivors is Jim’s Original, most famous for its Maxwell Street Polish sausage. Instead of sport peppers, they serve a larger pickled pepper that left me hiccuping at the heat. The pre-prepped, sweet grilled onions are a bit soggy compared to the usual fresh diced ones, but these were delicious nevertheless. All dogs come with a side of crispy french fries.

Open 24/7, Jim’s makes a great late-night stop, and its location right off I-90 just south of Roosevelt makes it your quickest stop if just passing through town.

Geoff joined us as we hit a basement restaurant in a repurposed red-brick walk-up: Flub A Dub Chub’s, which has earned recognition for its dogs in the 15 short years it’s been open. Rosemary Giarratano, a wry, seen-it-all member of the Giarratano family that owns and operates the joint, brought out a Flubby, the signature Chicago dog—and the most perfectly prepared and photogenic one we had that day—with a side of tater tots.

At this point, I misidentified it as my order and she handed it to me … but it was for the next table. I ended up helping Rosemary deliver it after the mix-up, at which point she fired me on the spot, making this the fastest I’ve ever gone through the hire and fire process. Probably.

You can add cheese sauce, chili, and/or a bacon wrap here, and the menu offers 14 dog recipes, including a vegan option, plus burgers and more. Frankly, I loved this place.

Next stop: Fatso’s Last Stand, where Geoff finally got his char-dog. Dogs come with all the usual ingredients plus a side of house fries, a lineup of Jarritos sodas, and some interesting milkshake flavors, including “Irish Coffee,” with the expected whiskey. Dog options also include a sauerkraut/spicy mustard NYC version.

Gene & Jude’s was founded in 1946 by Gene Mormino and Jude DeSantis, who felt their ballpark dogs at a Cubs game were missing something—not fries with that, but fries on that. Their dogs are known as Depression Dogs, based on those cheap frankfurters of old. Mustard, relish, onions, and sport peppers are optional, and there are no pickles or celery salt. Hand-cut fries are laid right on top of the dog.

Inside, the line was fairly long, but then so was the line of employees behind the counter, taking orders and moving them out quickly. “No seats, no ketchup, no pretense, no nonsense,” reads their website. A wall is adorned with awards and feature articles.

One would be remiss not to mention their only non-dog offering: tamales. Add it to your bag.

Superdawg combines the all-American food with the all-American drive-in. Stay in the car, order at the car-side speaker and lighted menu, and a carhop brings your order. (Sorry, no roller skates.) These were all-beef, but not Vienna brand, and a bit thicker. They come with fries and a pickled green tomato slice among the toppings, all in a handy little cardboard box that helps keep your food off your clothing better than the typical paper wrapping.

Go in the evening to see the hot dogs Maurie and Flaurie light up on top of the building—a fitting end to the beginning of the dog days of summer.

Kevin Revolinski is an avid traveler, craft beer enthusiast, and home cooking fan. He is the author of 15 books, including “The Yogurt Man Cometh: Tales of an American Teacher in Turkey” and his new collection of short stories, “Stealing Away.” He’s based in Madison, Wisconsin, and his website is TheMadTraveler.com.