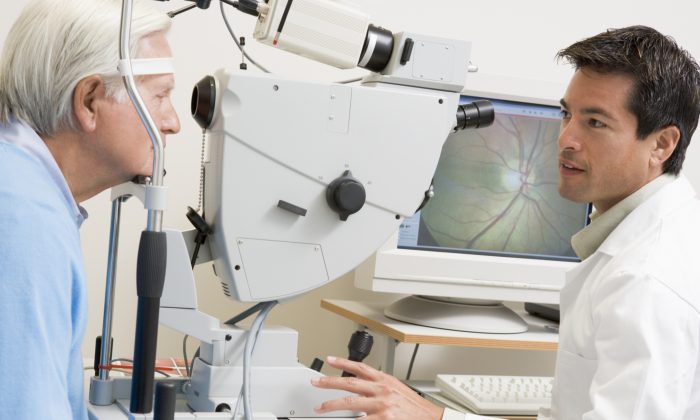 Blood pressure that is too low can result in the eye not having enough pressure to push fluid out. (monkeybusinessimages/iStock/Thinkstock)
Health

Glaucoma: Could Low Blood Pressure Be a Cause?

Three million North Americans suffer from glaucoma, the second-leading cause of blindness in North America. Glaucoma has been called the “sneak thief of sight,” as half of the people with this disease do not know they have it.

Fluid is continually forced into the eye to nourish the lens and other structures. It normally dribbles out of the eye at a controlled rate through a narrow channel. But with increasing age, the control valve of this channel has an increased chance of becoming plugged. This increases the pressure within the eyeball, squeezes blood vessels, and decreases nutrition to the retina and optic nerve.

Increased pressure initially damages peripheral vision, causing the optic nerve to send smaller and smaller images to the brain. Eventually all peripheral vision is lost, leaving patients with “tunnel vision.” Patients now see things as if they were looking through a telescope. If treatment is still delayed, central vision will also be destroyed.

Ninety percent of glaucoma is due to the chronic type. A few patients have warning symptoms, such as seeing colored rings around lights, difficulty adjusting to darkened rooms, blurring of vision, or failure of new glasses to improve vision. But unfortunately, most people remain unaware of glaucoma’s presence. And it’s possible to go blind in one eye before glaucoma is diagnosed.

Ten percent of victims are struck by acute glaucoma. It’s a major emergency and left untreated can destroy sight within 24 hours. Fortunately, this is rare, but it is painful. Chronic glaucoma is usually painless, hence the expression “silent thief of sight.”

Some people in this category make a bad error. They believe the intense pain, blurring of vision, and redness are due to conjunctivitis (red eye). But severe pain and visual changes are not present in this commonly called “pink eye.” So it’s imperative to seek immediate medical attention.

It’s interesting and puzzling that 20 percent of patients diagnosed with glaucoma have normal eye pressure, yet the nerve cells still die.

When glaucoma is diagnosed, eye drops are prescribed to help drainage and decrease eye pressure. Some drops, however, may decrease the production of fluid. If this treatment fails, laser surgery or other operative procedures are done to establish new drainage sites.

But prevention is better than cure.

The research of Dr. Patrick Quaid, head of the Guelph Vision Therapy Centre in Canada, did not include anyone on hypertension drugs; nevertheless, it shows a critical balance between blood pressure and eye pressure. In effect, forcing blood pressure too low can result in eye pressure that does not push fluid out of the eye. He calls this “perfusion pressure.”

Dr. Quaid says that physicians treating hypertension must be cautious that blood pressure doesn’t get too low.

But if a patient is being treated for hypertension and blood pressure drops to 105/65 mmHg, the perfusion pressure would be 45 mmHg (65 minus the eye pressure of 20)—not a good sign for glaucoma. Dr. Quaid says any perfusion pressure lower than 50 is a dangerous indication of disease progression. His research has been published in Investigative Ophthalmology and Vision Science.

Once again, it appears that moderation in all things is important. After all, we can have an underactive or an overactive thyroid. Now we must think of blood pressure in the same way.

Dr. Gifford-Jones is a medical journalist in Toronto. His website is DocGiff.com. He may be contacted at: Info@docgiff.com.