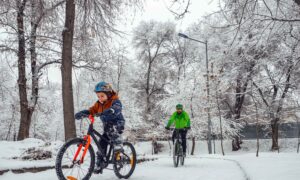 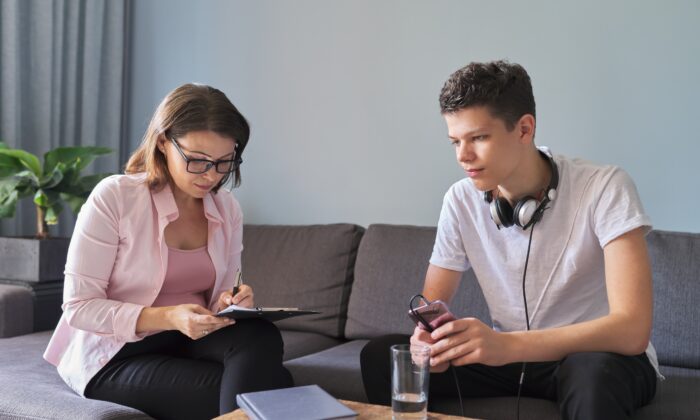 A wave of depression, anxiety, and suicide has schools looking for ways to help children get the care they need. (VH-studio/Shutterstock)
Mind & Body

Getting Children Help When They Need It

In 2019, the Rockville Centre school district in Long Island, New York, was shaken by a string of student deaths, including the suicides of a recent graduate and a student.

“When you get these losses, one after the other, you almost can’t get traction on normalcy,” said Noreen Leahy, an assistant superintendent at the school district.

To Leahy, the student suicides exposed a children’s mental health crisis that had been brewing for years. She had observed a concerning uptick in depression, anxiety, and suicidal ideation among students. Her school district had a team of mental health professionals, but Leahy said they couldn’t provide the kind of long-term care many students needed.

“Remember, psychologists and social workers and counselors in school districts are there to make sure kids are learning,” Leahy said. “We’re not hospital wards. We don’t do psychotherapy. So it’s very limited what we can do for these students.”

She said she saw an urgent need to connect students to mental health care quickly and easily, and the 2019 tragedies drove her to find a way.

Her vision ultimately led to the formation of a unique partnership between several Long Island school districts and the nearby children’s hospital, Cohen Children’s Medical Center, part of the Northwell Health system. That partnership provides prompt access to mental health services for students and includes ongoing support for school staff members in addressing children’s mental health, creating a mental health safety net for kids and families in the area that didn’t exist before.

At its heart is a new behavioral health center, which the hospital opened in January 2020. Students are evaluated by the center’s child psychiatrist and mental health counselor, who start and continue treatment until a child can be connected to long-term care in the community.

The concerning rise in mental health issues noticed by the Long Island school administrators mirrors national trends. Roughly one in five U.S. children meet the criteria for a mental health disorder, and the rate of suicide attempts among teens has risen over the past decade, according to the Centers for Disease Control and Prevention.

Around the country, most kids who have mental health issues don’t get treatment. There’s a shortage of providers who work with children and it can take months to get an appointment.

“The wait times on average to see a mental health specialist on an emergency basis is somewhere between two to three months and for regular basis is up to 12 months, which is an unacceptable wait time,” said Dr. Ujjwal Ramtekkar, a child and adolescent psychiatrist at Nationwide Children’s Hospital.

It’s common to see students go to the emergency room (ER) only to be discharged soon after and return to school without a plan for follow-up care, she said.

“And then the problems start to spiral again out of control,” Smith said. “And then they’re sent back to the hospital [ER].”

It was with those worries in mind that, after the student suicides in 2019, Leahy began raising her concerns with colleagues, school board members, and other parents, including Gina-Marie Bounds, a hospital administrator at Cohen Children’s Hospital.

Bounds took the idea to the head of emergency child psychiatry and other hospital officials at Cohen’s and they got to work. Leahy spread the word to neighboring school districts, who were dealing with similar problems, and persuaded them to come on board. Several months later, the mental health center opened its doors.

This couldn’t have come at a better time, Leahy said. As many large hospitals around the country saw a surge in the number of kids in mental health crises in their emergency departments, the new behavioral health center reports the opposite trend. The number of mental health visits to the emergency room by students from the school districts declined by at least 60 percent in 2020 when compared with the previous year.

School administrators also say the health center has played a critical role in prevention by promoting the emotional well-being of students, families, and school personnel. School and health center staffers meet twice a month via Zoom to check-in and brainstorm ways to address emerging health and wellness concerns of staff members and families.

The Right Help at the Right Time

The goal of the new health center is to provide kids with care as soon as symptoms emerge.

The center is staffed by a child psychiatrist, a mental health counselor, and a medical assistant. It’s located next to a pediatrician’s office and within a few miles of the school districts it serves.

When a child first arrives, the child is evaluated to determine whether they need to be hospitalized.

And the center starts that care right away—medication and/or therapy, depending on what each child needs—to stabilize the child and prevent a worsening of symptoms, and to connect them to ongoing care with a provider in the community.

In January, a local resident, Tara, found herself calling the health center to make an appointment for her 17-year-old sister, who had been struggling with irregular sleep patterns and panic attacks for months.

Jasmine said she felt suffocated during her panic attacks.

Jasmine and Tara met with a mental health counselor at the behavioral health center. The follow-up sessions were helpful for Jasmine, who learned about the importance of speaking with a trusted friend or adult any time she felt triggered. And the clinic helped Jasmine get connected with a nearby psychologist whom she now sees for weekly therapy sessions, Tara said.

Removing Barriers for the Most Vulnerable

The new health center provides an important safety net for kids who might otherwise fall through the cracks, like 17-year-old Alyssa Gibaldi, who was refused care by other mental health providers because of a disability.

Alyssa attends Oceanside High School and is extremely social, according to her mother, Jennifer.

“She’s like the mayor of the school; everybody knows her,” Jennifer said.

Alyssa has Down syndrome and the pandemic upped her anxiety. Last fall, she became catatonic and went into what Jennifer described as a “zombie-like state.”

On several occasions, Jennifer called 911. Alyssa was transported in an ambulance to the ER and hospitalized. After her neurologists ruled out seizures and other conditions, they suggested Alyssa see a psychiatrist.

But Jennifer said Alyssa was turned down repeatedly by providers saying they didn’t take her insurance or that they didn’t work with kids with disabilities.

That’s when Jennifer reached out to the school nurse, who referred the family to the new behavioral health center. The center’s child psychiatrist, Dr. Zoya Popivker, reviewed Alyssa’s medical records and prescribed medications for depression and anxiety.

Jennifer said they got the meds on a Saturday morning, “and by Saturday night, she was out of the catatonic state. Ever since then, she’s been coming back to us, like her personality came back.”

Alyssa continued to go to the behavioral health center for several months, until they were able to transition to a psychiatrist who works with kids with disabilities.

The Case for School-Hospital Partnerships

It makes sense for children’s hospitals to partner with schools, because that’s where kids spend most of their day, said Ramtekkar, the psychiatrist at Nationwide Children’s Hospital.

School staffers often know their students well and can spot early signs. That’s why schools in many parts of the country have been working to forge partnerships with nearby mental health care providers.

But such partnerships still depend on mental health care resources in the communities they serve. A 2019 study found that 70 percent of counties didn’t have a single practicing child psychiatrist.

Leahy, the assistant superintendent at Rockville Centre in Long Island, said sharing a behavioral health center across multiple school districts leads both to better collaboration and cost savings. The price her district pays for the services is less than the cost of one full-time staff member, and the state chips in to cover part of that.

Cohen Children’s Hospital will add a new behavioral health center this summer, expanding to 14 school districts. At that point, about 60,000 students in Long Island will have access to immediate mental health support should they need it.

This story is part of a reporting partnership that includes NPR, Illinois Public Media, and KHN. Nationwide Children’s Hospital, mentioned in this story, is a financial supporter of NPR.

This story was republished from Kaiser Health News.  KHN is a national newsroom that produces in-depth journalism about health issues. Together with Policy Analysis and Polling, KHN is one of the three major operating programs at KFF (Kaiser Family Foundation). KFF is an endowed nonprofit organization providing information on health issues to the nation.