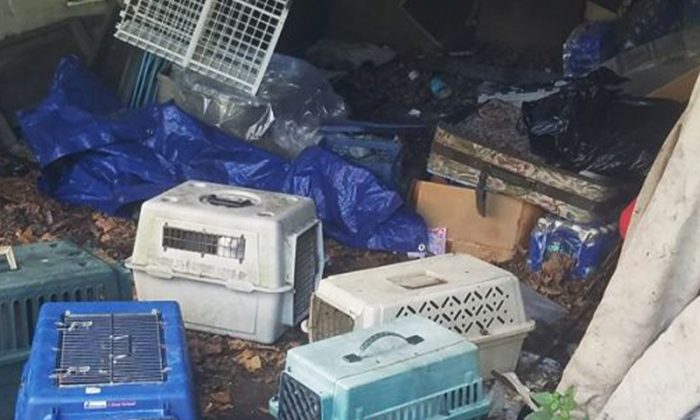 Talk about being at the right place at the right time, a gas man felt an unusual urge to read the meter of an abandoned house in East Orange, New Jersey. What he found, however, has people saying “he was sent there,” for he ended up saving nine lives.

Mike, the gas man with an intuitive gut feeling like no other, had tried to make his way through all the clutter outside an abandoned house to reach the service line, when he “heard meows and looked over at a tarp covering something,” back in August 2017.

The large blue tarp in the garage didn’t seem too peculiar, but the sounds coming from underneath were. That’s when he knew he had to check it out.

As Mike lifted the blue tarp, he was met with a strong stench of urine and found five pet crates, containing cats and kittens, nine altogether.

Mike said that he “found 5 carriers of cats, 1 with 4 juvenile cats, another with 2 cats squeezed in a carrier and 3 cats in separate carriers.” Some felines were crammed inside a single carrier.

It was apparent that the felines had been left here for some time, as the smell of urine indicated the cats had resorted to relieving themselves in their own cages. Normally, cats wouldn’t do that unless they had no other options.

Seeing the poor cats, the compassionate Mike sprang into action. He quickly ran to a nearby store to buy the cats some food and returned to feed them. The starving cats “ate it up in seconds!”

Mike also contacted Miss Pat’s Cats, an animal rescue organization founded by Patricia Andrews-Webb, who rushed to the site to save the felines.

“I met him at the location, we loaded up the cats in my car and he drove me to my foster who said she would hold them until we can find rescues/fosters or adopters for them,” Andrews-Webb told The Dodo. “They are all extremely friendly.”

The cats were all placed into temporary homes. After an urgent shout-out for help in adopting the cats, St. Hubert’s Animal Welfare Center in Madison, New Jersey, agreed to take all the cats and look after them whilst they awaited their new forever homes.

Why were the nine cats abandoned in the garage of an empty house? No one knows the answer for sure. However, it seemed the felines had been taken care of by someone some time before Mike made the discovery, because the cats were healthy except for one that suffered from runny eyes.

Fortunately, the cats were rescued just in time. Mike was certainly a godsend for those felines.

Andrews-Webb said: “He wasn’t even supposed to read that meter. God sent him there. Had it been someone else, they could have died in these carriers.”

Kudos to Mike, Miss Pat’s Cats, and St. Hubert’s Animal Welfare Center for stepping up to help the nine cats!

UPDATE!! St,H uberts will take ALL the cats!! Thank you Becky!!URGENT!! Please SHARE!!! 9 cats found in this garage…