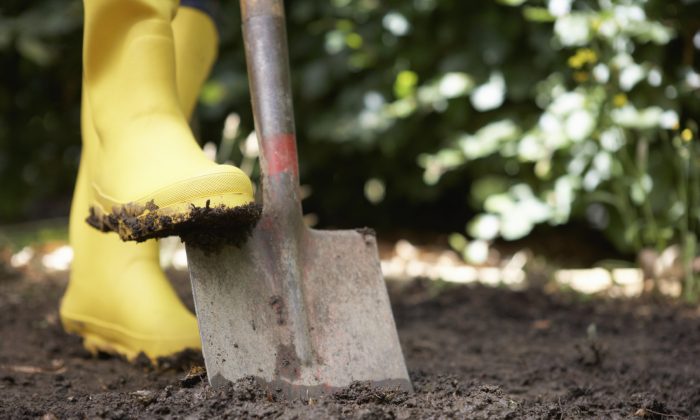 Gardening Is More Effective Exercise Than Going to the Gym

In addition to enhancing your life skills and boosting your food security, there is another major benefit of gardening, researchers have found: fitness.

Long-time gardeners have always know that putting plant and seed in the ground and then maintaining plants and crops as they grow is hard work. But chances are good that they weren’t aware of the health benefits of that work.

A half an hour of digging, raking and pushing a lawn mower is just as good as going to a gym.

Medical researchers and doctors now say that a half an hour of digging, raking and pushing a lawn mower is just as good as going to a gym. Thirty minutes of digging burns 150 calories; raking burns 120 and pushing a mower burns 165, the UK’s Daily Mail reports.

Though a half-hour jog, on average, burns up to 240 calories, doctors are nonetheless attempting to encourage more people to take up lighter activities that can be woven into our daily lives – activities that also burn calories and boost fitness.

Because many people feel too intimidated by gyms and strenuous fitness exercise, experts are instead concentrating more on getting people to include more moderate activity and exercise daily that they are less likely to give up on over the long haul. Researchers are finding that moderate exercise like gardening and walking will also cut the risk of heart attack in half, adding as much as seven years to an average life span.

30 Minutes a Day Is All That Is Required

“Gardening is great – it gets you outside, it helps build muscle and it burns calories,” Professor Naveed Sattar, an expert in metabolic medicine at Glasgow University, told the Daily Mail Online.

“The key thing is sustainability. The way to keep exercising is to something you love – such as gardening – or do something for a reason, such as walking or cycling to work,” he added.

Britain’s National Health Service recommends 150 minutes of moderate exercise per week, which includes activities like walking and gardening, or 75 minutes of strenuous exercise like running or playing soccer. In the U.S., the President’s Council on Fitness, Sports & Nutrition recommends 60 minutes of physical activity daily for children ages 6–17, and at least 30 minutes daily for adults.

In Britain, however, the NHS says that four of five people fail to reach their daily physical activity target, which has played a major role in contributing to the epidemic of obesity and diabetes. The same is true in the U.S.

The Daily Mail Online reported that the Royal Horticulture Society surveyed 2,000 people, asking about their experiences with the pastime. About 80 percent of respondents said that overall gardening definitely improved their fitness level, while 60 percent said they felt physically energized after gardening. In addition, 53 percent said their moods improved after a bout of gardening.

The society further noted that some 70 percent of respondents said gardening helped tone their forearms, while 52 percent said their thighs were toned, and about one-third said the activity toned their behinds. One-fifth of respondents said gardening was their primary form of exercise, which means that, for many people, it has had a major impact on them, health-wise (and there’s that food security angle, too).

“The evidence is that strenuous exercise gives you a bit more benefit, but not that much,” Sattar said. “And it comes at a cost, with a greater burden on the joints, and if you are moving from a sedentary lifestyle there is a risk of going straight in to strenuous exercise as there’s a strain on your heart.

“That’s why there’s a shift at the moment to focusing on light to moderate exercise, which can have a huge benefit and is easier to weave into your daily routine,” he added.

You Can Grow These Six Vegetables in Your Home