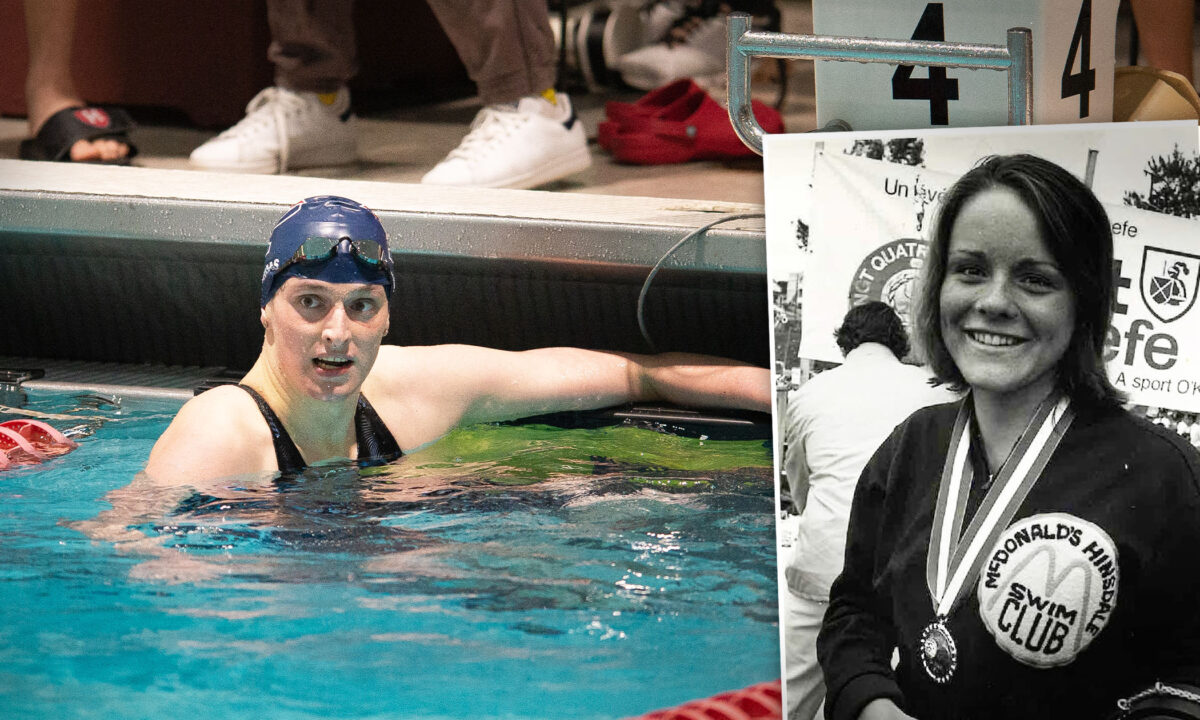 Lia Thomas previously competed as a male swimmer—claiming second place in several Ivy League championship events at Penn university as a man—before winning at the NCAAs while competing as a female.

Few women athletes have dared to openly decry any biological advantage Thomas might have competing with biologically female swimmers.

But Hall of Fame marathon swimmer and women’s rights advocate Sandra Bucha, 67, who paved the way for female athletes everywhere, knows what women athletes are now up against.

Now a civil law attorney for four decades, Bucha, of Sun City, Florida, was a record-breaking swimmer who missed qualifying for the 1972 Munich Olympics by just six-tenths of a second. She previously toppled barriers of inequity that once held female athletes back from fulfilling their dreams, and helped establish an equal playing field in sports.

Bucha respects the struggle of transgender athletes, she said; however, female athletes are “terrified” to speak out about the “fundamental unfairness” of biological men competing against women. This threatens the foundation she helped lay—so she spoke up.

“I would have thought this is fundamentally unfair,” Bucha told The Epoch Times. “I trained my entire life as a woman, a biological woman, competing against biological women for a spot in the United States Olympic Team, and now there’s someone who has an inherent biological advantage over me who’s taken my dream, who has slashed my dream—displaced me and destroyed my dream, shattered my dream.”

A “loud but powerful minority” has chilled the conversation for the rights of female athletes—a conversation Bucha once lived firsthand. As a preteen swimmer in Hinsdale, Illinois, where she was reared, she excelled under Hall of Fame-inducted coach Don Watson’s tutelage, but quickly found females’ high school swim leagues in short supply (there were none), unlike boys’. An exceptional athlete, she was allowed to train with the boys; other girls let slip their careers.

“I watched the boys participate in high school swim meets, I cheered on the boys as they competed,” Bucha said. “But I could not compete in any high school team.

“If other girls would have been given that opportunity, they would have cracked the ceiling and been able to pursue their swimming careers,” she added. “Most of the girls I knew that were very, very good swimmers, they quit, they didn’t continue because there was no opportunity for them.

“I believe there would have been other women that could have been also competing for the Olympic Team, but they didn’t have the opportunity I had.”

Nor was there college swimming for girls, she soon discovered. Age 17 or 18 was the end of the line, after which, girl swimmers retired.

Bucha left the pool to attend her freshman year at Stanford, but that summer, she saw a newspaper ad for a 10-mile marathon in Lake Michigan with a $2,500 prize. The catch? She had to swim against both sexes. But Bucha took home second prize, behind a male competitor, while claiming a world record to boot. Then she joined a professional marathon swimming circuit. In 2014, she was inducted in the Swimming Hall of Fame for her achievements.

But the “fundamental unfairness” of those years impelled her dad to sue the State of Illinois and the Illinois High School Association in 1972, seeking equal rights. “The court found, ‘Yes, there should be high school girls’ teams,’” said Bucha. “The interesting part is the judge said, ‘But meanwhile, we will not allow girls to compete against boys, because it is fundamentally unfair to the girls,’ because the girls will probably be beaten by the boys because they are biologically superior.”

This, along with the efforts of other women athletes, was instrumental in establishing a foothold for separate and equal athletic opportunities for both sexes.

Fifty years on, it’s fitting Bucha should stand up again; we’re turning the clock back toward marginalizing women, she thinks.

“We are dealing with a limited number of individuals who identify as transgender, not an entire sex, like women versus men,” she added. “It’s a very small category of individuals that are displacing women, and women only. You don’t see transgender men displacing men in swimming competitions, for example, you don’t see that fundamental unfairness that you see when you have a biological man—meaning a transgender woman—displace a woman swimmer.”

Unlike 1972, today’s political climate makes girls nervous about offending the woke crowd, for fear of malignment on social media or worse: being doxed, Bucha told the newspaper. Girls who do speak insist on anonymity. “The transgender movement has no issue with getting names for their cause,” said Bucha.

Lately, transgender athletics have made a splash. Besides Lia Thomas, in August, transgender weightlifter Laurel Hubbard from New Zealand competed in the Summer Olympics, but didn’t finish despite completing the lift. The judges ruled in a split decision that she did not hold the bar steady above her head. Also, Canadian soccer midfielder Rebecca Quinn became the first openly transgender Olympian to compete.

Bucha expressed sympathy for transgender individuals, but feels further efforts are needed to achieve fairness for all.

“I respect that struggle,” Bucha said, pleading for a “mutual respect and appreciation for the history of women’s sports” while offering a message for the transgender community: “Look, we respect you, you are entitled to your opinions. But before you encroach upon the areas in which we have made such progress, let us tell you what was not available to women 60 years ago.”

For remediation, Bucha looks to history. “When I was swimming, there was an outstanding—one of the best—women’s swimmers in the world, Shirley Babashoff, during her time swimming,” said Bucha, harking back to the Montreal games in 1976. “But there was an Eastern German contingent of swimmers, they were all steroid-enhanced, they went to the Olympics.

“They were using performance-enhancing drugs, they were shattering world records, they were getting the Olympic gold medals,” she added. “They displaced Shirley Babashoff from her rightful ability to win as many golds as Mark Spitz, Michael Phelps, and everyone else. They were stripped of their medals once they looked back at how fundamentally unfair it was.”

“Or create open competitions, so that all who choose to will engage, as I did back in professional swimming. I knew that I was jumping into a lake to swim against 30 other men. I chose to do that. That wasn’t fundamentally unfair to me, because I chose to be in that competition. We can do the same thing now.”