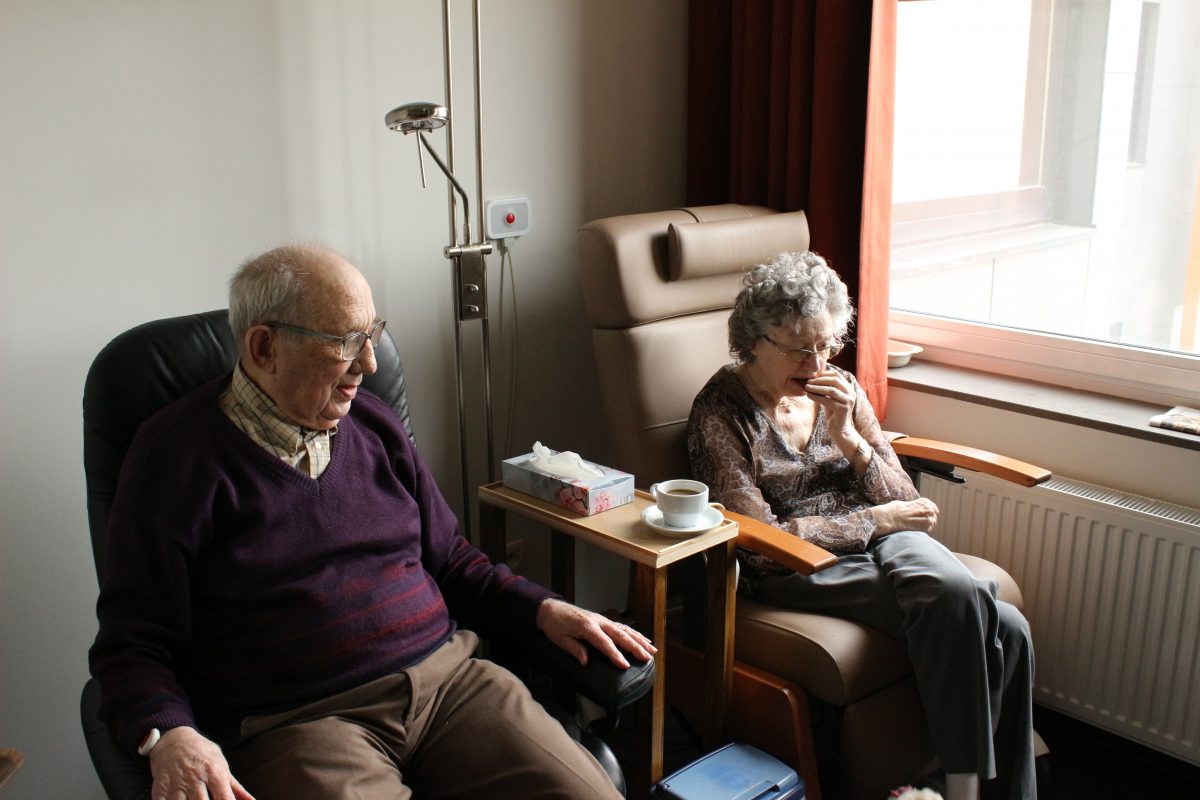 For many seniors, having some help to do daily-living activities can be the difference between living at home and spending their final days in an expensive institution. (Elien Dumon/Unsplash)
Health

New program saves money and keeps seniors out of nursing homes by aiming at capability
BY Judith Graham TIMEFebruary 10, 2019 PRINT

Pauline Jeffery had let things slide since her husband died. Her bedroom was a mess. Her bathroom was disorganized. She often tripped over rugs in her living and dining room.

“I was depressed and doing nothing but feeling sorry for myself,” said the 85-year-old Denver resident.

But Jeffery’s inertia faded when she joined a program for frail low-income seniors: Community Aging in Place—Advancing Better Living for Elders (CAPABLE). Over the course of several months in 2018, an occupational therapist visited Jeffery and discussed issues she wanted to address. A handyman installed a new carpet. A visiting nurse gave her the feeling of being looked after.

In short order, Jeffery organized her bedroom, cleaned up her bathroom, and began to feel more upbeat. “There’s a lot of people like myself that just need a push and somebody to make them feel like they’re worth something,” she said. “What they did for me, it got me motivated.”

New research showed that CAPABLE provided considerable help to vulnerable seniors who had trouble with “activities of daily living”—taking a shower or a bath, getting dressed, transferring in and out of bed, using the toilet, or moving around easily at home. Over the course of five months, participants in the program experienced 30-percent fewer difficulties with such activities, according to a randomized clinical trial—the gold standard of research—published this month in JAMA Internal Medicine.

“If someone found a drug that reduced disability in older adults by 30 percent, we’d be hearing about it on TV constantly,” said John Haaga, director of the Division of Behavioral and Social Research at the National Institute on Aging, which provided funding for the research.

Positive findings are especially notable given the population that was studied: 300 poor or near-poor older adults, nearly 90 percent women, over 80 percent black, with an average age of 75 and multiple chronic medical conditions such as heart disease, arthritis, and chronic obstructive pulmonary disease. While about one in three older adults in the United States needs help with one or more daily activities, rates of disability and related health care costs are higher in this challenged population.

Half of the older adults in the trial received the CAPABLE intervention, which includes six visits by an occupational therapist, four visits by a registered nurse, and home repair and modification services worth up to $1,300. The control group received 10 visits of equal length from a research assistant and were encouraged to use the internet, listen to music, play board games, or reminisce about the past, among other activities.

Both groups experienced improvements at five months, but older adults who participated in CAPABLE realized substantially greater benefits. Eighty-two percent strongly agreed that the program made their life easier and their home safer. Nearly 80 percent said it enabled them to live at home and increased their confidence in managing daily challenges.

Sarah Szanton, who developed CAPABLE and directs the Center for Innovative Care in Aging at the Johns Hopkins School of Nursing, attributes positive results to several program elements. Instead of telling an older adult what’s wrong with them, a mainstay of medical practice, CAPABLE staff ask older adults what they’d like to be able to do but can’t do now.

Seniors often say they want to cook meals for themselves, make their beds, use the stairs, get out of the house more easily, walk around without pain, or go to church.

The focus then turns to finding practical solutions. For someone who wants to cook but whose legs are weak, that could mean cutting vegetables while sitting down before standing up at the stove. A bed may need to be lifted on risers and a grab bar positioned between the mattress and box spring so a person can push herself up to a standing position more easily. Or, a nurse may need to go over medications and recommend potential changes to a person’s primary care doctor.

“Why does it work? Because we’re guided by what people want, and in order to get better, you have to want to get better: It has to be important to you,” said Amanda Goodenow, program manager for CAPABLE at the Colorado Visiting Nurse Association, the agency that assisted Jeffery. In Colorado, CAPABLE has been funded by a local foundation and Habitat for Humanity, which supports the program in six markets.

Hattie Ashby, 90, who has lived in the same two-story house in Aurora, a city adjacent to Denver, for 43 years, told Goodenow last summer that she wanted to get up and down the stairs more easily and walk around outside the house. Ashby has high blood pressure and COPD.

“They gave me a walker and made arrangements for me to put my oxygen tank on it so I could go to the mall,” she said, recalling some of what the CAPABLE staff did. “They fixed the wall in my bathroom and put something I could hold onto to get in and out of my bathtub. And going up and down my stairs, they put another rail on the wall where I would be able to hold onto.”

“It is a remarkable service for a senior citizen to be encouraged, to be helped, to be supported that way,” Ashby said.

It also turns out to be a cost-effective investment. For every dollar spent on CAPABLE, nearly $10 in combined savings accrues to Medicare and Medicaid, largely because of hospitalizations and nursing home placements that are prevented, research by Szanton and others has shown. (Many CAPABLE participants are eligible for both government health insurance programs because of their low incomes.) The average program cost per person is $2,825, far below the average $7,441 monthly cost of a semiprivate room in a nursing home in 2018.

With a new grant of nearly $3 million from the Rita & Alex Hillman Foundation, Szanton is turning her attention to expanding CAPABLE across the country. Currently, the program is available at 26 locations in 12 states, and Medicaid programs in Massachusetts and Michigan have adopted a version of it for some members. A major challenge is securing funding since public and private insurers don’t typically pay for these kinds of services. So far, foundation and grant funding has been a major source of support.

Szanton hopes to persuade Medicare Advantage plans, which cover about 19 million Medicare recipients and can now offer an array of nonmedical benefits to members, to adopt CAPABLE. Also, Johns Hopkins and Stanford Medicine have submitted a proposal to have traditional Medicare offer the program as a bundled package of services. Accountable care organizations, groups of hospitals, and physicians that assume financial risk for the health of their patients are also interested, given the potential benefits and cost savings.

Another priority will be looking at how to extend CAPABLE’s impact over time. Since benefits diminished over a 12-month period in the just-published clinical trial, additional program elements—phone calls, extra visits, and follow-up assessments—will probably be needed, said Dr. Kenneth Covinsky, a professor of geriatrics at the University of California–San Francisco and co-author of an editorial on CAPABLE that accompanied the study.

He’s optimistic on CAPABLE’s prospects. “As clinicians, when we see older patients with conditions we can’t reverse, we need to understand we haven’t run out of things we can do,” Covinsky said. “Referring patients to a program like CAPABLE is something that could make a big difference.”

Judith Graham is a writer for Kaiser Health News where this article was originally published.