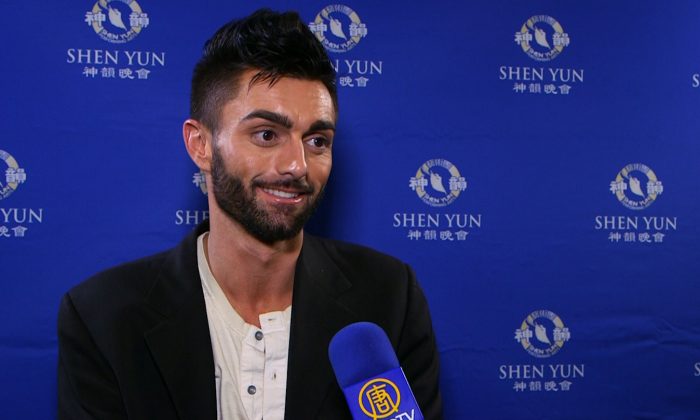 ESCONDIDO, Calif.—A former oboe player who grew up in theater was amazed and inspired by Shen Yun Performing Arts at the California Center for the Arts on Jan. 28.

“Amazing. Absolutely amazing,” said Paddy Brannigan, who has been a makeup artist for 14 years.

Being able to see the live orchestra pit, Mr. Brannigan was floored by Shen Yun’s oboe player. “I think I’m going to go buy a used oboe and get back on it,” he said.

You could feel the emotion behind it.
— Paddy Brannigan

Shen Yun was founded in 2006 in New York with the mission of reviving the true culture of China, which was once called Shen Zhou, or “The Divine Land.”

Each performance showcases the intensely expressive art form known as classical Chinese dance, along with story-based dances depicting all facets of Chinese history, and folk and ethnic dances from the rich Chinese landscape.

Accompanying these is the celebrated Shen Yun Orchestra, which “combines the spirit, beauty, and distinctiveness of Chinese music with the precision, power, and grandeur of the Western symphony orchestra,” according to the company website.

“I can’t say enough about that oboe player,” said Mr. Brannigan, who played the instrument for ten years. “There were a few oboe solos, and he just killed it. I need to start doing that again. Build those muscles back.”

Mr. Brannigan was also impressed with the erhu soloist, Xiaochun Qi, who played a piece titled “Divine Elegance.” The erhu is a two-stringed Chinese instrument that is played with a bow, with thousands of years of history.

Ms. Qi played the erhu in such a powerful way, as though it was part of her own body, said Mr. Brannigan. “It was incredible, incredible. So I really enjoyed it,” he said.

The program also included vocal soloists who sing in the classical bel canto style, yet maintain the difficult Chinese diction.

Overall, Mr. Brannigan said the stories of Shen Yun were clear, the makeup was well done, and the combination of the dance and the music was professional and polished.

“Growing up in theater, it was just fluent and it was just on point and on key,” he said. “Between the conductor and the choreographer, it was excellent, outstanding.”

Mr. Brannigan has seen many shows, but said he felt more passion and inspiration from Shen Yun’s performance.

“You could feel the emotion behind it,” he said. “Lovely performance.”